Every evening, invariably in order to showcase indigenous flowering of Odissi, there is one troupe presenting Odissi. 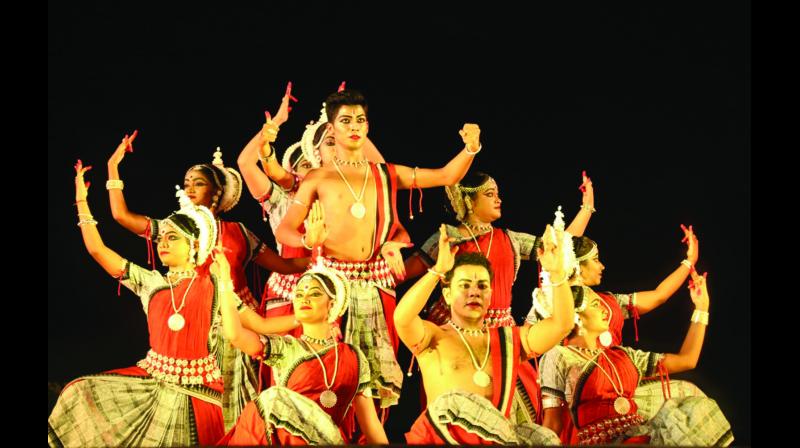 Aloka is known for her researches in Sabda nritya, also explorations of Yantra Tantra and Mantra, and she created visual geometric formations using wooden sticks and arranging her disciples in such formations. It drew the attention of the audience applauding these formations.

Every year from December 1 to 5, with the backdrop of the magnificent shikhar of the Konark temple, the Konark Dance Festival has taken place for the past three years. It has gained a formidable international reputation as a major classical dance festival. The sleeping town comes alive with the bustling crowds and the open air theatre as all blaze with tiny electric bulbs, colourful festoons, the trees bathed in lights, turning the place into a festive venue where the stories from mythology unfold in dramatic modes, with the tinkling of ankle bells, the sound of the mardala, melodious tunes on violin, the clinging of cymbals and the imaginative light design when dancers in their attractive costumes and captivating dance movements cast a spell on a gathering of aficionados and lay audience alike.

Some of us from the media as dance critics have been fortunate to attend the dance festival for the past more than two decades, feasting our eyes on classical dance forms, with choreographic works by leading dancers and their troupes. A wide range of dances are offered. Sometimes there are excellent works mixed with not so high standard and sometimes one also comes across unexpected works. Since the venue is vast, the group choreographies are selected.

This year I arrived a day late as I was attending at the  Mumbai National Centre for the Performing Arts 50 years’ celebrations with memorable performances by a galaxy of artistes. I missed Ratikant Mohapatra’s Odissi work, and Shama Bhate’s Kathak. On December 2 from Indonesia Widya Budaya Balinese dance group presented excerpts from Ramayana, focusing on the episode of Sitaapaharan: Ravana kidnapping Sita. To the music of gamelan, clad in exquisite costumes, golden crowns and ornaments, with stunning visuals, it appealed to the large mass. However, one expected the Indonesian government to have sent a higher standard of a troupe than the one which was sent.

Every evening, invariably in order to showcase indigenous flowering of Odissi, there is one troupe presenting Odissi. From Kolkata, celebrated Odissi dancer, choreographer, guru Aloka Kanungo brought three numbers, An Ode to Surya, Man Sambhar Pallavi and Mahavidya. Whereas the surya stuti appeared oft repeated and listless with the imagery of seven horses, it was Man Sambhar Pallavi that offered audience novelty. Musician Dr Ram Hari Das explained that there are four types of Man Sambhar, Man meaning tehari or katana which refers to a three-time repetition of a particular bol. It is of four kinds in Odissi dance. Lagana Mana, Bhaunri Mana, Birama Mana and Abhirama Mana. Set to Sankarabharanam raga, it offered a novelty with a three-time repetition of these four Manas. Pallavis in Odissi repertoire are an inevitable part of nritta, pure dance. The dancers performed well, highlighting the “katana”.

Aloka is known for her researches in Sabda nritya, also explorations of Yantra Tantra and Mantra, and she created visual geometric formations using wooden sticks and arranging her disciples in such formations. It drew the attention of the audience applauding these formations.

Of the three numbers Jayaprabha presented with her group, Ashtapadi from Gita Govinda Chandana charchita created an attractive image of Krishna clad in a yellow garment with a garland of flowers. His dancing mesmerising the milkmaids to the Sopana music, and choreography by Bharati Shivaji stood out for evoking the Yamuna’s banks — the rasa lila by Krishna with the Gopis.

The mystical one was Tatvam that aimed at projecting the search for the subtle from the gross, from concrete to abstract, absorbing the cosmic energy, manifesting the secret codes of the cosmos in virtual time and space. The moving images were evoked by the group of dancers. The dynamic and kinetic energy of Mohini Attam were explored through the images of Purush and Prakriti. Inspired from Sri Narayan Guru’s Kundalinipattu it showed how Kundalini rises from Muladhara upwards.

In Jivam the dancers formed a cluster on one side with Sarpashira hastas, suggesting serpents entwining the Lord, and Naga devata watching Ananda Nritya of Lord Siva. The gradual and then in druta the ascending energy with Punnagavarali raga, appropriate for movements of serpents was most effective. The musicians gave the dancers adequate support. Despite the comparatively slow pace of Mohini Attam, it must be said to the credit of Jayaprabha and her dancers, they succeeded in engaging the audience unfolding their choreographic numbers.

The legendary Kuchipudi dancers Raja and Radha Reddy with their troupe including Kaushalya, who conducts the nattuvangam and their daughter Yamini Reddy and other sprightly young disciples, presented Bharat Bharathi, depicting through dance, the conceptual being of Bharatmata and the vision they have for the country. Raja and Radha appeared as gurus showing the disciples the origin of the Vedas, the nine universal sentiments alternatively enacting Nava Rasas, the Ardhanarishwar concept performed by Yamini, the prayers used by the Hindus, the Sikhs, the Christians, and the Muslims, which all lead to one path, the greatness of our country from the Himalayas to Kanyakumari and the joyous dancing that unites all. The dance on brass plates with Tarangam in praise of the dark coloured Krishna won rounds of applause. The message conveyed so artistically through Bharata Bharathi is timely and relevant in present times. The dancers were all in great form and Raja and Radha displayed artistically the greatness of our country.

The finale saw Viabhav Arekar and his Sankhya group of dancers in their Bharatanatyam presentation in great form. They lived up to their reputation as brilliant dancers led by a gifted choreographer. Their covering the vast stage, placing themselves dramatically wherever necessary thematically and with excellent training and technique — they won the appreciation of the discerning and lay audience alike.

Surya stuti, an ode to the Sun God revealed the Sun’s magnificence with excellent lighting by Suresh Jadhav. Even the slow pace of seven horses looked perfect.

The exploration of the form was noticed in Jatiswaram of Tanjore quartet, in raga Kalyani and later on using other ragas. The lines, the diagonals, the geometrical formation, the sound footwork, all were arresting displaying the Bharatanatyam dance form in a new light. Vaibhav deserves congratulations for such bold and innovative attempts.

Dashavatara from Gita Govinda offers challenges to choreographers how to craft the ten incarnations which suggestively tell the story of why Krishna took various forms. Taking the form of Matsya, saving the Vedas, upholding the mount during the churning ocean, as Kurma, saving Prithvi, taking the form of Shukar, as Narsimhas vanquishing Hiranyakashipu, as Vaman keeping his promise of giving three steps of land as Baliraja, as Parshurama wielding an axe and annihilating the kshatriyas, as Rama killing Ravana, in a nutshell dramatically telling key incidents of the Ramayana like of the golden deer, Ravana kidnapping Sita, setu bandha and Rama and Ravana’s duel.

Channelising river Yamuna as Balarama wielding a plough, saving animals being slaughtered from the altar of Yajna as Buddha and taking the form of Kalki watching vengeance on people, Vaibhav drew a canvas with his deft imagination. His presentation stood out for its perfection and excellent teamwork.

Alas, I wish I could have said so about the final dance drama of Hansadoota: swan messenger. Taking the story from Harivamsha, the story of demon Bajranava succeeding in challenging the sly strategy of Indra, the three sons of Krishna, three daughters of Bajranav, their union and the role played by the messenger’s swans did not rise to various dramatic heights. It would have sustained interest if it had been edited suitably.