The piano is regarded as the instrument that can sum up an orchestra, because of the keys that denote the seven notes. 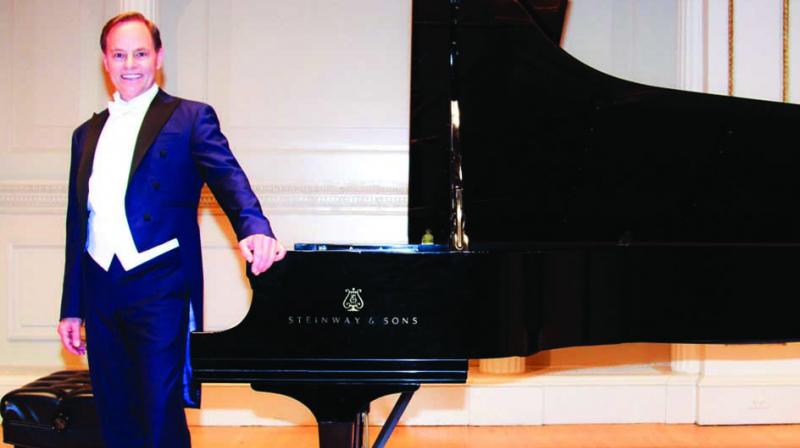 The piano is regarded as the instrument that can sum up an orchestra, because of the keys that denote the seven notes. One is bound to lose themselves in the melancholic world that it creates.

Most recently, the national capital got to witness the charm of the piano at India International Centre through a concert performed by Richard Steinbach. The concert featured a variety of compositions by Chick Corea, Richard Addinsell, Gwyneth Walker, Jorge López Marín, Lowell Liebermann; and music from Brazil by Dimitri Cervo, Edmundo, Villani-Cortes, Ronaldo Miranda & Claudio Daue lsberg.

Piano to Richard came at the tender age of four when he played the piano ‘by ear.’ But, he never owned a piano until one of his teachers asked his parents to purchase one and the rest is history. “I started (taking) lessons when I was about five-years-old and have studied ever since. I have always had a love for music and the piano,” he says. “I had this calling for music.”

When one thinks American music — more often than not — they always associate it with Jazz and music from the pop culture. Richard explains the reason, “I think popular music and jazz attracts more people than classical music. Classical music has a smaller audience and there is a certain type of people that love classical music.”

The style of music that Richard tries to focus on fuses the music of the popular and the classical world. “I think it is a wonderful thing that composers are incorporating elements of the two worlds now. Whether it’s classical or pop, I think it’s both,” he opines. Through his concert, he brings music from Cuba and Brazil and ensures that the originality of the music from that country is maintained. He explains further, “It’s fascinating to me that composers from different countries infuse their cultures in it. It is another thing I love — the international sense to it.”

Richard has been playing the piano for a long time — more precisely his whole life. But what matters is that he finds joy in playing the instrument even today. “With the piano, more than any other instrument, you have got the range of sound and the full range of an orchestra at your fingertips, and I think that’s what attracts me. Whereas, other instruments play one note at a time,” he expresses. The piano is that instrument where every key that denotes the notes of music. He adds, “Every single note is perfectly in place of where it needs to be. You can get a lot of different colours from the piano and that fascinates me.”

The saying goes that every artist is a critic of his or her work and Richard is no different. When asked about whether it is the internal voice of appreciation or the applause of the audience, he simply replies that it is both. “Even though I really couldn’t see the audience, I feel them and when I feel the audience is with me, I know it.”

On the experience of playing in India, he adds, “In India, it has been a marvellous thing to take in the culture every step of the way,” Apart from his debut concert in India, he has performed almost all over the world and one wonders if the nerves are there even today. He says, “Yes! There is always this anticipation but once when I am at the piano, I go into my world. But, I think it is important to feel that way because it adds to the excitement and you don’t know what’s going to happen because it’s a live performance.”