Strumming around the world

Renowned guitarist duo, The Grigoryan Brothers, talk about their journey, music, and love for India. 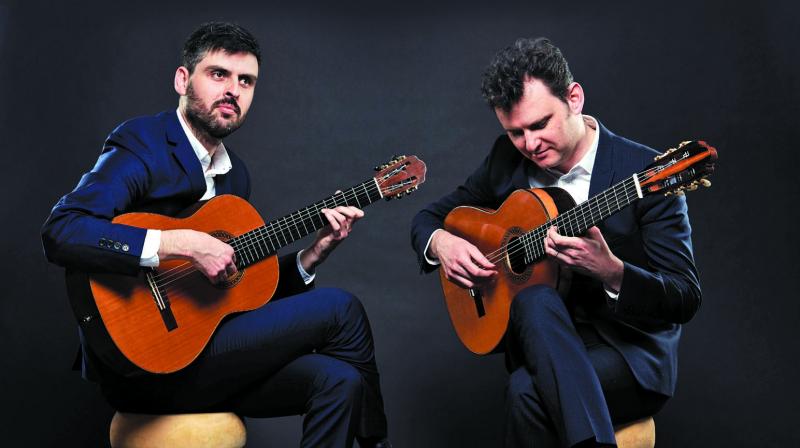 Revered as the finest musicians, The Grigoryan brothers have earned a reputation for enthralling audiences.

When Australian guitarists Slava and Leonard Grigoryan came to Mumbai on a slum tour in 2010, little did they know that they would be the most frequent foreign musicians to visit India. Be it performing at international concerts or interacting with students, the musicians have left no opportunity to spread the word of music among Indian audiences. This time, the brothers are all set to do a music therapy session with the children at the St Jude India Child Care Centre followed by a performance at the G5A today.

“It is always pleasure to be in India. It’s a wonderful opportunity to interact with kids because that’s how you develop music. We are excited for the session with them and the performance,” says Slava, to which Lenny, (Leonardo), as Slava calls him, adds, “There are so many memories with India but we really enjoyed performing in the slums of Mumbai and that is what brought us here again.”

Revered as two of the finest musicians of our generation, the Grigoryan brothers have earned a reputation for enthralling audiences with some of their most known performances across the globe. Recalling the days when Slava first picked up the guitar, he says that he didn’t think that the instrument would change his life. “My parents were trained classical musicians so music has always been around,” Slava shares, to which Leonard adds that he wanted to follow his big brother’s footsteps. “But while growing up, I was always trying to not to copy my elder brother and develop my own style,” he reveals.

Embracing genres like Western classical, jazz and contemporary music from around the world, the duo has now recorded 14 music albums and is also the recipient of four Australian Recording Industry Association (ARIA) awards. The brothers share that they love working together, and don’t disagree often.

“We are lucky that we get along well. We used to practice together and never felt any competition. There has never been any complex,” says Leonard, who is nine years younger than Slava, and has been touring with him for last 10 years. “It’s a pleasure to tour together across the world. We are very boring in terms of disputes. We are similar in terms of music and many aspects of life,” he adds.

Along with their regular performances across Australia, the musicians are also known for their music in Europe, Asia, Australia, Brazil, South Africa, the Middle East, USA and India. When asked if they see music evolving over the years, Slava nods in positive. “It has evolved in different ways and it’s wonderful to see that. Musicians have become better technically and in terms of expression,” says 43 year-old Slava, adding that the guitar as an instrument too has evolved over the years.

Leonard agrees, adding that things are different now. “I never thought about it, but I see music is growing more and more incredible. Music is more developed these days and a lot of people are spending time learning it. It was different when I started,” says the young musician in conclusion.