When music makes you happy

About being widely acclaimed as creators of “happy music”, Ashwin says, “Our music is more on the lines of positivity than purely happy.” 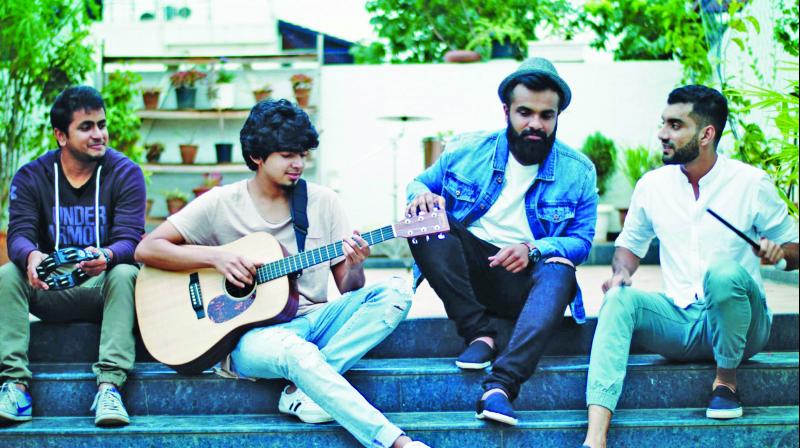 In an exclusive interview, Kochi-based band When Chai met Toast talks about its early days, music, and a whole lot more.

It all started with a jamming session between guitarist Achyuth Jaigopal (he also plays the banjo) and lead vocalist Ashwin Gopakumar in Fort Kochi. Today the four-member band intriguingly named When Chai met Toast has over 1.4 lakh monthly listeners on Spotify and 64.5 k subscribers on Youtube.

Talking about early days and the expansion of the band to include Palee Francis on the Keyboard and Pai Sailesh on the drums, Ashwin says, “Common musical interests and a desire to tour and play our own music brought the four of us together. We all knew each other from the music circuit in Kerala. Three of us (Palee, Ashwin and Sailesh) were part of metal bands, and Achyuth had his own solo finger style project.”

About being widely acclaimed as creators of “happy music”, Ashwin says, “Our music is more on the lines of positivity than purely happy.”

“Our songs borrow influences from all genres - from metal to EDM. Whichever genre it is, we try to be true to who we are with the music we make”, they say.

How do they feel when they are compared with Mumford and Sons, the Lumineers and even John Mayer?

“They are all inspirations for us. If we do get compared to these great songwriters, it makes us feel like we're doing something right.”

Talking about the unique element in their music and the use of Tamil and Hindi lyrics too, the band says, “It is for the listener to decide, but the multilingual lyrics and folk instrumentation in a pop space is different from most bands out there.”

Ashwin talks about the band's beautifully penned songs that have won thousands of hearts. Fight vibrates as it spreads a strong message. Ashwin says, “The song talks about the warrior and ninja in each and every one of us. It is about how a person's life changes from monochrome to the colourful rainbow of colours that triumph is.” Be it Firefly or Believe or Run Closer, the band has held fast to their philosophy of writing mostly about life experiences and struggles they have overcome.

“Recently, on a visit to Gangtok, we came up with a song at soundcheck. Khoj was written while killing time in the middle of a video shoot!” said Aswhin, explaining how inspiration can come out of nowhere in the middle of nothing!

How was it performing with Rangle Sardar for Karam?

“The song was completely out of our comfort zones. Rangle Sardar was the most humble talented and passionate group we had the opportunity to collaborate with. We performed the song with them in NH7 Weekender Chandigarh and it was a memorable experience.”

The band that recently had an international show in Singapore is looking forward to its next album. Ashwin says, “We have so many new things happening and we've been growing as a band. The album will be a bit different, with a couple of new instruments added in, but there's still going to be some of the core When Chai Met Toast elements.”

“The journey has been immense so far, but we believe it's just the beginning, there's a long road ahead,” says Ashwin. We wait for what they have in store for us.