Having recently launched yet another album, Ambi Subramaniam talks to us about his journey so far. 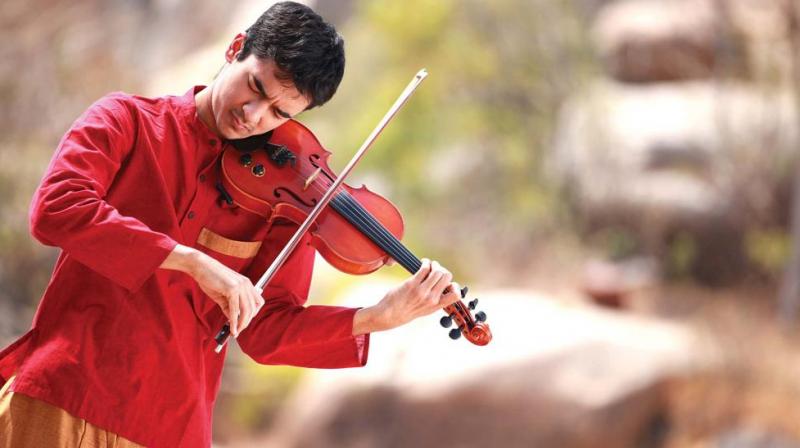 Ambi Subramaniam may have been born into a rich legacy of Carnatic music, but he didn’t take it for granted. His parents, noted violinist Dr L Subramaniam and singer Kavita Krishnamurthy wouldn’t allow their kids to be carried away by the lights and applause – a standard byproduct of stage performances, and it seems to have helped.

Off the top of our heads – a shelf packed with awards, performing at several concertas, being hailed as ‘the new king of Indian classical music’ and now a second album release, isn’t too bad for a 25-year-old.

His first album, Indian Violin was spontaneous. In that, Ambi stepped into the studio one day and walked out with its recording. “My second album, Just Playing was a little more planned,” he tells us.

“It was my belief both the musician and listener should be able to emotionally connect with the music, without thinking about how complex the Carnatic piece is. And that was the idea behind it,” he says about the album that was recently launched by his mentor and inspiration, Gypsy violinist Roby Lakatos.

While he basks in the beautiful glow of its ‘raga’ing success, Ambi can’t help but reminisce about where it all began – when he was three-years-old. “My father gave me my first violin, a tiny one, and I’d imitate whatever he was doing. In fact, even now, my father deconstructs our performances on the same night of the concert and that always helped me realise there was a lot of room for improvement!” he recollects.

There was always music growing up at the Subramaniam household and not just Carnatic. It spanned genres, countries and cultures. “That, I think, has had a huge influence on the way I think of music today,” says Ambi who already holds an MBA in finance and is now pursuing a PhD in music at Jain University.

What he calls his ‘well-rounded’ musical experience also includes his singing career and he admits that he was probably a better singer than a violinist, as a child.

He may have wanted to be a cricketer or a mathematician, but for now, it’s just music for him and he juggles several related endeavours flawlessly. He and his sister Bindu, another talented musician who earned her chops at Berklee, get along like a house on fire and have a band together - SubraMania.

“Though Bindu and I tread different musical paths, our individual styles complement each others’. For our upcoming releases, we’ve collaborated with artistes from all over the world and it’ll combine flamenco rhythms with Carnatic improvisation,” he reveals.

The junior ‘Mania’ns who run their parents’ academy, Subramaniam Academy of Performing Arts (SaPa), are also collaborating with the Norwegian government and the Norwegian music academy to engage in teacher training and to expose children to international music.

They invest a lot of time and effort into the kids there too. For instance, the proceeds of his new album will go towards creating an ensemble of underprivileged children through SaPa, where the children will be trained to become professional musicians. And the reason is simple – “The most important thing to build is skill. If you practice and focus on becoming more skillful, everything else will follow in due time,” says Ambi.