Indian singer Adnan Sami who has been out of the limelight for a while now is all set to come back with new and exciting music. 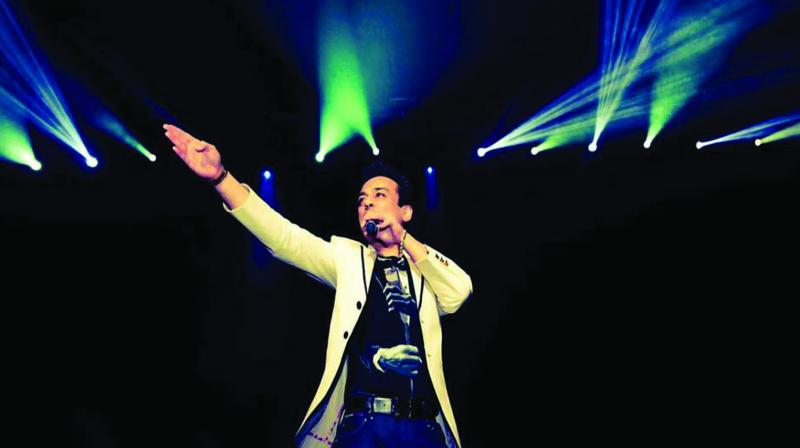 For all those who  have  been wondering  why  the super-talented Adnan Sami has not been doing new songs lately,  Adnan has  the perfect answer.

“I’ve been  very taken up  with live concerts  across  the world  for the past five years. It is something I needed  to do. That immediate  and direct connect with my audience, that experience can’t be  described in  words.  It is a spiritual connection. It is very energising,” says Adnan who is ready to return to recording at the soonest.

A hint at what he plans? “All I can tell you at the  moment is that it would be something entirely original and a territory I haven’t visited in any of my music so far.”

Recently fellow-musician Vishal Dadlani called out the re-mix culture referring to its practitioners  as “vultures.”

Says  Adnan, “Imagination is an incredible and divine gift that can be used in any creative activity, be it in the realm of positivity, negativity or stupidity. Have I made my point clear?”

Speaking of originality, how  does he react to  the current  debate  on  mindless re-mixes?

“To me unoriginality is death. I’d rather  do  my own  thing, create  my own  songs and  music than lean on  anyone for inspiration, no matter how extraordinarily talented,” asserts Adnan whose recent years  in India have been bogged down  by attack  from across the  border.

“I never  understood their bitterness and hatred. It isn’t as  if I took Indian citizenship to  spite any country. I am what I am  because  of  India. All my name, fame and earnings  have come  from  this country. I think  it would have been  unfair  for me to give credit for what I  do to any other country, be it Pakistan  or  elsewhere.”

The trolling has  stopped  now. “I think the bitter elements in  Pakistan have come to terms with  my  Indianness.  They have given up trying to  provoke me,” chuckles Adnan.

Adnan’s proudest moment as an Indian and a musician was when the  one and only Lata Mangeshkar praised him.

Recalls Adnan, “It  was  after  the   devotional Qawwalli Bhar Do Jholi Meri recorded for the film Bajrangi Bhaijaan. She rang me  up to say she liked it. Coming from the Queen Of Melody, Mata Saraswati reincarnated  whom I idolise and love like millions across the world, it was a pat on the back  that I will cherish forever.”

Adnan and the Nightingale go back a long way. Recounts Adnan warmly, “She has always been very warm and encouraging. I grew up hearing and seeing her idolised by my father. He couldn’t sleep until he heard Lataji’s lullaby Dheere Se Aja Ri Ankhiyan Mein. When I came to India, my one wish was to meet her. And when Lataji sang for me in the film  Lucky, I felt I has achieved the acme of my career.”

Adnan points out a ‘Salman’ connect with Lataji. “Lucky in which I had the privilege of  composing and singing a duet with Lataji, starred Salman. And  Lataji has  praised me  for a song in a Salman movie.”

Recently Adnan performed in Kashmir  to a rapturous audience. “By now I’ve done hundreds of concerts worldwide. Of course each one is special. And of course I get butterflies in my tummy even now before every live performance.  But this was in a different  league altogether,” says Adnan as he relives  every moment of what he describes as ‘magic in paradise.’ I said yes without a second thought, and no money was discussed, none taken. Come on yaar, this is Kashmir. Jannat mein gaane ke liye paise nahin lete (you don’t take  money  to sing in paradise).”

Nor did Adnan think twice about taking his wife and newly-born daughter Medina to the troubled valley. “It wasn’t as if the tension in  the  valley vanished for me. It is there. But we need to go beyond despair and head towards repair. This healing can only happen when more artistes worldwide perform. And what better healer than  music? I am proud to say I am the  first major artiste from Mumbai’s entertainment world to perform in Srinagar, and I’ve come back supremely  blissed by the welcome that I got from music lovers there.”

Any regrets? “Yes, I wish I had been to Srinagar earlier. I had been to Kashmir to shoot for my song in Bajrangi Bhaijaan in 2015. But that was  just in-and-out. This time I  got a chance to meet people, mingle with the people, sing for and with them. Kashmir has such wonderful people and is so beautiful. I performed right at the foot of  the Dal Lake, so  we can safely say there was never Dal moment during my concert, ha ha. My wife daughter and I got a chance to see some of the gardens  before we returned. Now I can’t wait to go back for a longer visit and for another concert.”