In the musical tradition that I grew up with, listening to music was the corner stone of the pedagogy in force. 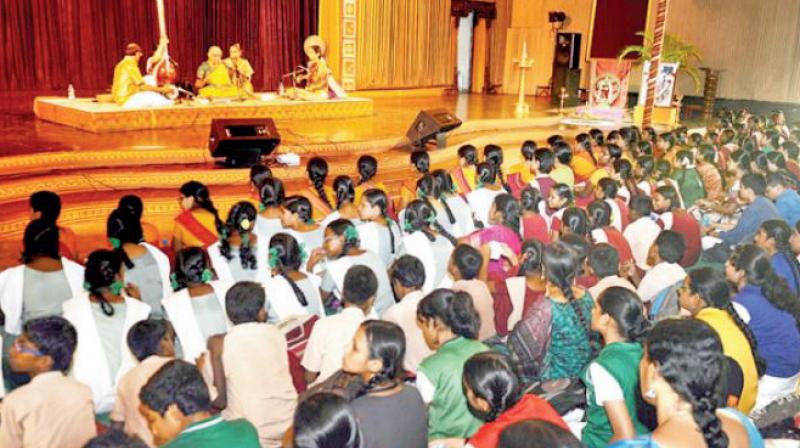 When the iconic and iconoclastic Jayalalithaa passed away, we were swept off by a tide of press articles studying her from different angles. One such article mentioned how she grew up learning music and dance, common in those days, because of the accepted norm that women would not venture into stronger domains. I have some objections to this argument.

Firstly, coming from a South Indian family myself, I would insist that music and dance were taught not because the girl child did not have other options. It was, and still is, a way of life in a majority of South Indian families. Girls, and even boys, are put through music lessons for as long as it continues, as this learning is considered vital and of central importance in shaping personalities and lives. And besides, why ever would one think that music and dance are not 'strong' professions? It requires the same acuity, work and tenacity like many other professions. A concert can be as tiring as, for example, a swim or a gymnastic display and any musician would vouch for that.

Having said that, during a friendly chat recently, a parent told me proudly that her ten year old was learning Carnatic music. She was delighted and so was I. Then came the next remark - I want my daughter to perform soon. The dream in itself is not bad, but why 'soon'? After all, the child is but ten and has a long journey first into understanding music before performing. I was curious to know if the child was encouraged to listen to music, to watch and listen to concerts, vital for performance preparation. Given the child's overburdened life between school, homework and music, concerts were a luxury, but of course the Internet helps, I was told.

In the musical tradition that I grew up with, listening to music was the corner stone of the pedagogy in force.

It was not just about passive listening, but patiently writing out song lists, comparing, identifying ragas, juxtaposing different concerts by the same musician, analysing the same raga by different musicians, notating. I learnt to quicky notate songs, rapidly jot down the essentials of the concert. It would then be reviewed carefully at home between my mother and I, and later with my other guru TR Balamani.

The more you heard, the more you established an intimacy with music, primal to further knowledge. Then, technology arrived and you listened differently. Though the idea crept in surreptitiously that you no longer required the musician in physical form in order to listen and re-listen. Slowly, modes of listening were changing. I still miss going to concerts as often as I would decades back. However, like stones by the sea that over time get chiselled, smoothened by the waves, the hard path gave a sturdy durability to your learning.

For future performers, it would be indispensable to watch, to see the part of stage presence, relationship between fellow artists, the non-verbal behaviour, and what happened between that which was neither said nor sung. A lot of subtleties come into play in these undiscussed realms that make live concerts a delight. A concert is a theatrical performance that needs to be watched as much as listened to. Of course, how today's generation listens to music has changed with time and one cannot disavow that.

Today's learners may not notate as they hear a concert. Their notations are printed and readily available in book form, which was not the case earlier. There is more ease in their learning, they learn and listen differently. Importantly, the prudish attitude of eschewing other forms of music, especially popular forms, considered aesthetically inferior has given way to a more eclectic listening where a lot of genres meet together on the much-loved device, the cell phone!

During an Uber ride a few days ago, the young student-driver treated me to some Bollywood numbers. Engaging in a casual conversation with him, I asked him if he listened to other forms of music as well. Sometimes English songs, but never any Indian classical, he said with a forlorn look. Why? Because I cannot sing that, I cannot understand, it’s boring. The litany was long. Have you ever tried listening? My simple question jolted him into reflection because he had never really attempted listening to any classical. He had grown up with received notions on classical and misconstrued self-concepts on musical leanings. I urged him to try and listen to some as he drove. He promised earnestly. As I was about to get off at my destination, the young man asked me on a parting note - do you listen to film songs often? I pondered over the question - was it an innocent query or a tongue-in-cheek remark? I would never really find out.