Indie, and loving it

The Tapes have come to be known as a revolutionary band in the country’s music scene, and for good reason. 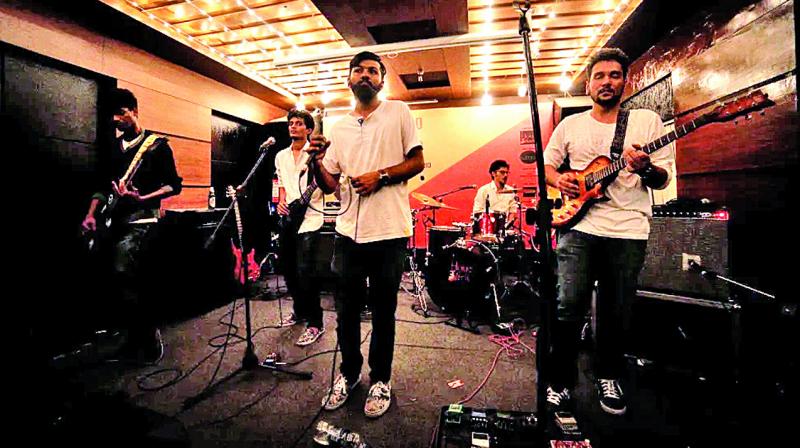 Also on the group are Saurav Tyagi on the guitar, Abhay Krishna on the bass guitar and Sri Hari on the drums.

The kind of impact they’ve created in the last three years that they’ve been around, speaks volumes about their music. The Tapes is a Hyderabad-based indie band, whose name has been inspired from Sound City, a documentary on Foo Fighters.

“We started off as a small city band but with each show we did, we only grew and that sure was a boost,” shares the talkative Pranav Kumar, the band’s lead vocalist.

Chaitanya M., aka Chaitu, one of the band’s guitarists, chips in with a laugh, “Well, talking is his job! He has to be the voice.”

Also on the group are Saurav Tyagi on the guitar, Abhay Krishna on the bass guitar and Sri Hari on the drums. With each member’s music influences being varied, the group reckons that’s what makes their music “not very genre-specific”.

“You could classify us under grunge, indie, progressive rock, electronic music, trance music, psychedelic grunge,” says Saurav even as the rest laugh at his list. Pranav shares, “We can’t really be classified into a bracket. We’ve grown up on a dose of bands like Foo Fighters, Nirvana, The Strokes and Arctic Monkeys, among others.”

So while each of them has an assigned role at the outset, Chaitu shares that the creative process is a combined effort. “In the jam room, our chemistry is brilliant. Everyone pitches in,” he says. The group is currently working on their new album, which will release soon.

Interestingly, even though The Tapes is their mainstay, each of them juggles an alternative career — Chaitu produces music and is a DJ, Pranav works with an advertising firm, Abhay is into digital marketing, Saurav is a consultant at an MNC and Hari is pursuing an MBA. So is it tough to handle the parallel worlds? “Not really! It all comes organically because we love doing this,” they say.

The young team is quite chuffed about the great opportunities that have come their way, but are hungry for more. After all, it’s not a child’s play to have been invited to perform at the NH7 Weekender, the gig which they believe is a major milestone for them. “What can be more exciting as sharing the same green room as artistes like Raghu Dixit, Parikrama and Indian Ocean? That was quite the moment,” share the band members who have also featured on VH1’s music diaries.

On a parting note, we ask them what they, as an emerging young band, think of the opportunities in the Indian music scene, and Pranav answers, “We’ve seen a great deal of transition over the last few years. With more international artistes coming to be part of music fests here, I think we are getting that much-needed exposure. That cycle where you meet new artistes, check out their work and at the same time share your work, is one hell of an experience. And we do crave more of that!”