Reggae beats from the basement

Reggae band Bombay Bassment speaks about their new album and finding their sound at last. 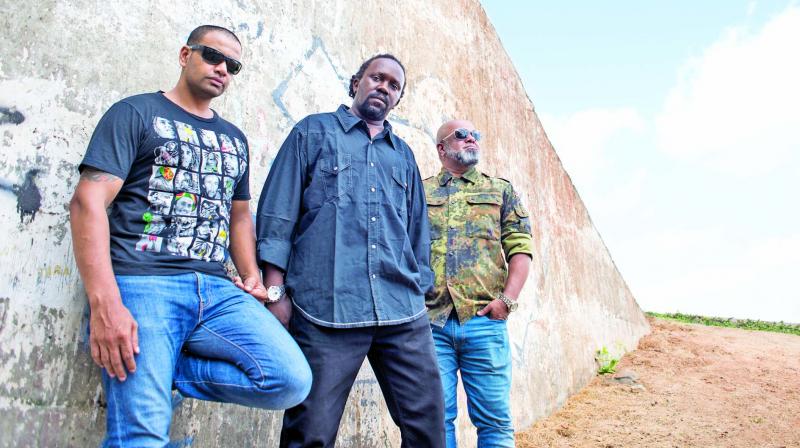 The urban music and reggae champs Bombay Bassment have been unwavering in appeal and kicking up a storm every chance they get with their infectious rhythms and carnivalesque sounds.

Music can make you think, act up and reminisce, but at the center of it all, it’s designed to help you have fun. The urban music and reggae champs Bombay Bassment have been unwavering in appeal and kicking up a storm every chance they get with their infectious rhythms and carnivalesque sounds. Their latest EP OK, Dance is no different. “It’s designed with one purpose in mind — to make people dance. That’s it,” says Robert Omulo aka Bobkat, as he takes a break to speak to us about the band’s six-city tour of India.

Formed in 2010, MC Bobkat (Robert Omulo), Ruell (Ruell Barretto on the bass) and MajorC (Chandrashekhar Kunder on samples/percussion) are not new to the music scene. The Mumbai-based trio has two albums under its belt — Bombay Bassment and Bombay Bassment X FUNC VIP — as well as an appearance at Glastonbury where they opened for Snoop Dogg. “Our first album had a lot of acoustic sound to it; the second one was very electronic. OK, Dance represents that sweet spot in between. We’ve found our sound on this release, not leaning to either extreme, just a heady mix of both,” explains Robert.

Their music is inspired by everything from hip-hop acts like The Roots, Public Enemy, Dr Dre, Ice Cube and RHCP to reggae acts like Bunny Wailer and Bob Marley, of course. Their funk-inspired happy sounds punctuated with hip-hop, dancehall, reggae, Soca and Afrobeat has earned them quite the reputation too, not just for their rambunctious live performances, but tunes that make hip-shaking compelling. “Reggae is still at a nascent stage in India, but it’s growing. What is notable is that most people enjoy some reggae even if they’re not diehard fans. With this EP, we want listeners to remember Bassment whenever they need to lift their spirits and want to feel happy,” Robert adds.

A mutual friend apparently suggested to the drummer and the bassist that adding his friends (an emcee and a DJ) to the act would complete the sound. “We rehearse regularly and write new material as often as we can. We revisit past gigs and figure if we can improve on them” says Robert.

In the midst of DJing, watching cricket and other live acts and playing soccer, they are already throwing around ideas for their next release. “We will always have another festival to dream of, no matter how much we do. We plan on regularly dropping EPs and are looking at potential collaborations,” says Robert, already looking for the next inspiration.