A step up into the big league

A trained classical violinist, Abhijith is currently one of the busiest musicians. 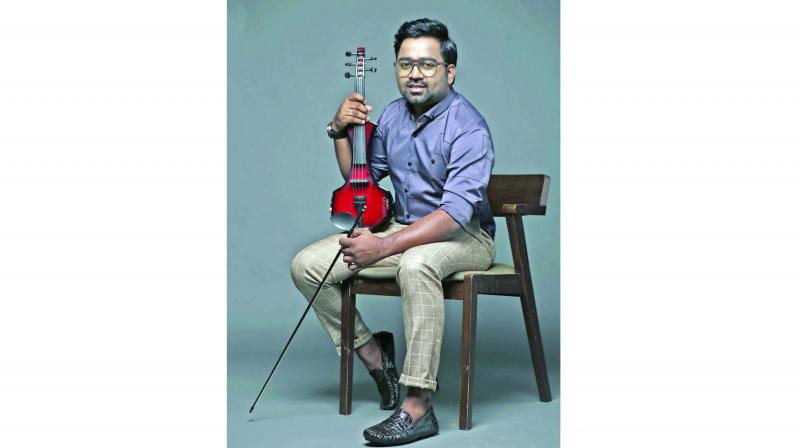 When Kerala based violinist and composer Abhijith PS Nair did a cover for the song Ennavale Adi Ennavale, it went viral on social media and even caught the eye of AR Rahman. Beginning his career by doing covers of songs of legendary musicians like Rahman, Abhijith is now exploring new arenas in music with fresh and innovative ideas.

A trained classical violinist, Abhijith is currently one of the busiest musicians around setting a standard of his own in the industry. “Though I started learning violin at a young age, I was 15 when I started playing in concerts.  Like any other budding artiste, I wondered how I am going to fit in the industry. After two years since my first live gig, I had the opportunity to share the stage with some great musicians. With their help, I started composing pieces too. Composing music is part of my wish-list and I used to create short instrumental pieces. And when I look back, this journey has been incredible.” He entered the industry as music director when he was 18 with the movie Akashangalil that enhanced his stardom.  His biggest breaks was when he released a jazz fusion duo album with his friend Sandeep Mohan. “We had the opportunity to work with ace drummer Dave Weckl and Mohini Dey.  We recorded our first song Saraswati at Montreux. Releasing the song was such a proud moment for me and my fellow musicians and I believe that was the best day of our career. Working with artists like Dave was quite an experience,” shares Abhijith. His next big project was a single titled Ekalavya, which he worked on with composer and drummer Ranjit Barot.

Having collaborated with international artistes, Abhijith says that working with them demands a lot from you and help you learn a lot.

“It is always challenging and also helps one grow. Their professionalism is praiseworthy.”  Rodney Holmes, Dominique Dipiazza and Mathias Muller are some of the other international artists he has worked with. “I value the time I worked with the maestros in the industry. I have  been lucky to share the stage with Ranjit Barot, Bickram Ghosh, Rajhesh Vaidhya, Fazal Qureshi, K.J. Yesudas, Hariharan, Shankar Mahadevan, Kalaimamani A. Sivamani, Mandolin U. Rajesh, Mattannur Sankaran Kutty Marar, Stephen Devassy and many more.”

When asked about the development of indie music in the country, he says that the Indian music industry is still film-bound, which should change if we want to see any growth in the independent music scene. “In India, music is largely film-bound. Earlier, independent musicians struggled a lot and I think we need to change the attitude towards indie artists. Now-a-days, there are small changes. Some of the artists are getting recognition for their own music. I think we are slowly getting on the right track. One of the best characteristics of our music is that it is flexible.

This has helped me create fusion by collaborating with western music.” Abhijith is currently busy with national and international shows as well as new projects including a jazz fusion album. “I am working on a new album and the first song will release soon. The album will feature acclaimed drummer Simon Philips,” he wraps up.