Fusion band V Minor have been on a spree of fusing western songs with Indian instruments. 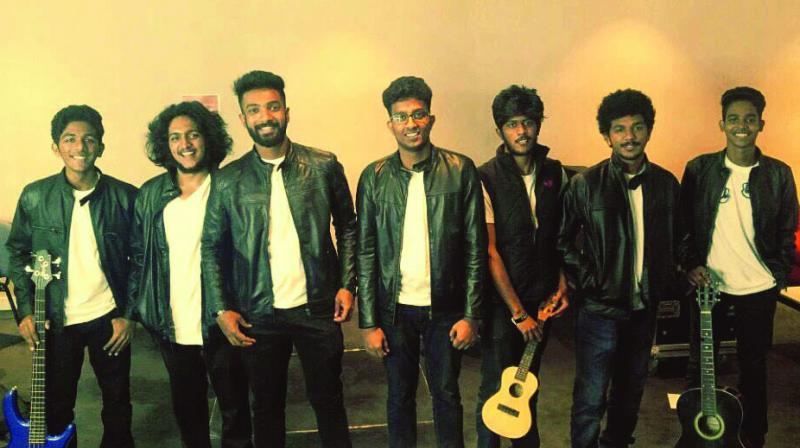 V Minor is a band of seven boys, all doing different things, from finishing up school to working in a corporate company.

Music lets people see into each other’s souls, young or old, no matter what. Traditional Indian music has managed to gain a fan following over time. But now, slowly, tablas are being traded in for drums and Carnatic tunes for rap and auto-tuned voices. According to a recent report, there is a  drastic drop in Carnatic concert attendances and youngsters’ interest in traditional modes of music are slowly giving into westernised forms.

With this in mind, there have been an influx of fusion bands who have started incorporating traditional instruments into their music to bring in more inclusivity and to let traditional modes of music live on. Fusion is the new ‘it’ word and everyone is crazy about it. Western songs and tunes have been immortalised on veenas, harmoniums and many other Indian instruments. Another report says that this may be the only way traditional music can be saved.

V Minor is a band that incorporates Indian and western modes of music. They recreate popular western songs through instruments like the harmonium, tabla etc. Two of their most popular covers are Girls Like You (by Maroon 5) and Radioactive (by Imagine Dragons), were recognised by both bands on Twitter.

Although they started out by doing covers of desi songs with guitars and pianos, they say,  “We felt like we were striking an ingot with a stick. Trying to force the issue. When we tried the other way, around it was easier. We felt more at home. The ingot on the stick did a much better job.”

The harmonium is an integral part of their songs as they feel that it’s emotion cannot be replicated by most modern instruments. One of their band mates, Sidharth SKP, taught himself the  instrument which is their core.

One day after a sumptuous lunch of Chandi Biriyani, SKP began fiddling around with the harmonium, playing Imagine Dragon’s Radioactive. The rest of the seven friends joined him with other instruments and it turned out to be “surprisingly catchy.” They then went ahead and recorded and uploaded it. “If only we knew what was to be,” they reminisce.

After this, there was no stopping them. They continued to do covers and sometimes would add their own  desi twist to it. Apart from musical instruments, “We quite often use an Abacus instead of a shaker. We also use things like plates, tea trays and spoons. You could say cutlery in general. Probably the ghost of the Chandibiriyani from the first day is a driving factor!” they chuckle.

V Minor is a band of seven boys, all doing different things, from finishing up school to working in a corporate company.

After they shot to fame, they kept the momentum going with a TEDx Talk in Thapar University (Punjab), performing at the Google conference in Macau representing India, and they also toured Singapore. Playing in front of thousands at Cotai Arena and in front of a Singaoprean crowds was a truly magical experiences, they said.

When asked what their ritual before a show, they jumped in excitement saying, “Oh, how we wanted someone to ask us this question! All the members of the band are practical jokers. Playing pranks and doing the weirdest of things comes as natural as breathing to us.

We settle our nerves by unsettling others around us, be it stage hands or unsuspecting strangers. We do Harlem shakes and what not before going on stage almost always.

We talk loudly about the most absurd topics so that others overhear us and their reactions help us laugh. We’d do anything for a laugh before we go on stage. We once pranked a college stage crew by telling them we needed to make a sacrifice before the show and we wanted a live chicken to slaughter so that we could drink its blood. The expression on their faces were priceless to say the least!”

Now, they’re working on bringing out their own music and hoping to join a major reality show on Indian television. Besides this, they’re also prepping to return to Singapore for two shows and have a few lined up in Bengaluru, Indore and Mumbai. Since everyone is sort of all over the place at the moment, they’re waiting for things to calm down before they take this on full time.