Subra MANIA with a Spanish vibe

Pegged as child prodigies who turned into seasoned artistes, their band SubraMania has garnered much acclaim over the recent years. 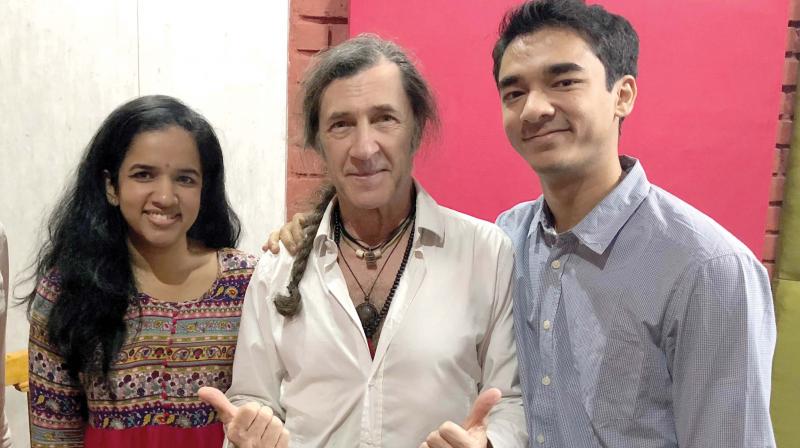 Theirs is a melody that rises from generations of soulful renditions thanks to their lineage. Yet, Ambi and Bindu Subramaniam have always created their own music.

Sibling duo Bindu and Ambi Subramaniam are the next generation musicians, who rose to prominence with their soulful renditions that have elements of rock and classical melodies. Born to stalwarts L Subramaniam and Kavita Krishnamurti Subramaniam, music was not a new concept for this duo who conjured up the SaPa, a one of its kind music academy in Bengaluru. Now, the brother-sister are back with something new. Pegged as child prodigies who turned into seasoned artistes, their band SubraMania has garnered much acclaim over the recent years.

While tracks from SubraMania have always had that soulful enigma to it, this time around, the siblings took things up a notch — with the release of Mirage, their latest song, a collaboration with Flamenco legend Jorge Pardo.

Having crossed over half a million views on Facebook already, it is of little surprise about how mammoth a success this new collaboration is. In a candid chat with Ambi and Bindu Subramaniam, they share the inside track about their musicology with us.

“This is a very fun project for us. What he’s (Jorge Pardo) done for the flute is truly phenomenal. When we invited Pardo to come to Bengaluru and play with us, it was really nice to see how open he was, and when a musician like him starts playing it takes the track to a completely different level,” begins Ambi Subramaniam, who credits this to sheer serendipity. This could be pegged as their first collaboration with one of the best European musicians. But, Ambi also has a interesting tale to share, “About eight years ago, he had this project for the Spanish government which he did for Oman. So he invited me to guest start the project. Sometimes life gets in the way. So, it was great to work together with him after eight years.”

While the duo has done a Flamenco Carnatic piece earlier, this title has a different flavour to it. Bindu reveals more, “This track has a lot of rock elements, Spanish Flamenco, Indian Carnatic elements to it. For us, as artists, the whole idea of working with someone of that stature was plain exhilarating. And, this is very different from what we’ve done.” Ambi adds, “It is a very energetic track. Most of the track is very heavy with a lot of rock elements. In between, we have had peaceful vocal sections. So that’s the contrast there. This melody just kind of came to us. We came up with a melody, and once he came on board, he added a different element. And, also, it was nice there was a concert before this video recording. So, the moment you perform something you have a better idea of what works and can improvise on that.”

Ask about the biggest takeaway, and pat comes the reply. When you keep doing different projects, it helps you grow. It has been a great learning experience for us,” shares Bindu.

Crossing half a million views, Ambi concludes by saying, “We have gotten a lot of positive response. A lot of people who have been following us closely have told us it is very different from what we have done, and that makes me very happy because as an artist you don’t want to stagnant and get stuck.”

Bindu and Ambi Subramaniam started the SaPa in Schools programme in 2014 to provide high quality music education to all school children, irrespective of background or circumstance, and currently work with 20,000 children (and growing) in many different schools, including NGO schools, government and private ones. “There are many globally recognised benefits of music education for children, not least that it gives them the skills they need to succeed in the 21st century.  Music is a powerful tool for social change, and through music, students can be change makers,” Ambi explains, adding, “One example of this is the 10,000 Deeds Campaign which was recently launched with the participation of UNICEF, the World’s Largest Lesson and Comics Uniting Nations. The idea of the campaign is that children as young as three can take specific action towards the UN’s Sustainable Development Goals, and all this individual action can create a real change.”

Bindu, Ambi and Mahesh Raghvan, through the Thair Shadam Project have been working on a song A Million Dreams involving young children, which will be the anthem for the 10,000 Deeds Campaign.  The video was shot while at a government school in Bengaluru, and had the participation of the children of that school and the students of SaPa.