Deepak Peace’s ballads are inspired from the politics of the country. 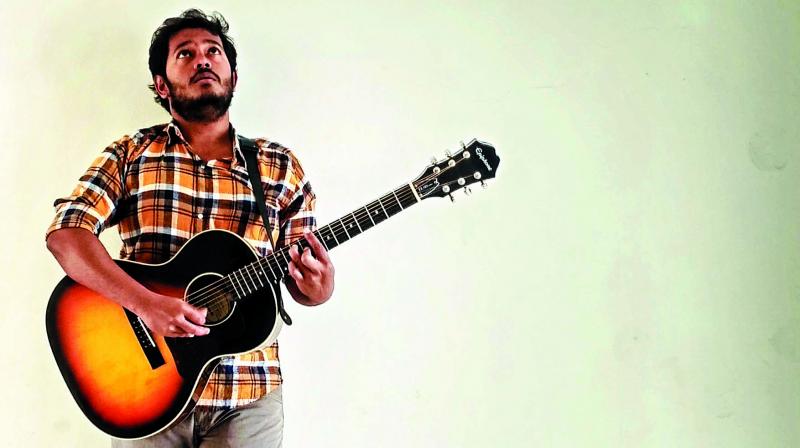 Catchy enough for you to look him up online and find out more about this man who calls himself Deepak Peace.

There is, on the list of new tracks, a black and white picture of a man holding a slate, which reads Aaj Ke Naam. Catchy enough for you to look him up online and find out more about this man who calls himself Deepak Peace and the music on his debut album, Aaj Ke Naam.

The song titles are even more intriguing — Hey Mr Prime Minister, Kashmir Ki Kali, Anti-National Hero, and so on. But these are ‘not protest protest songs,’ Deepak is quick to explain, except the first of this list of songs that he had made at the time of the FTII incident.

“Yahan filmein banti hai, katputaliyo ka khel nahi// Ye deewano ki mehfil hai, political sale nahi (This is where films are made, it’s no place for a puppet show// It’s a celebration of lovers or fanatics, not a political sale),” goes the track.

“But these are not songs to offend anyone. They are all love songs, with lyrics with a difference,” Deepak explains. Peace is, quite obviously,  not the last name he was born with. He decided to go for this one when people tried guessing his caste and religion through his last name. “I thought mine should say, let’s make peace.”

For Deepak, everything boils down to politics. “Politics is not a separate entity,” he explains. He wrote Hey Mr Prime Minister when he saw the PM ‘was on flight mode, never stopping anywhere.’

Kashmir Ki Kali is a love song. “Indians not residing in Kashmir are unaware of the situation. If you go there, you will find Kashmir Ki Kali.” Bhagat Singh was written, because he is one historic personality who affected Deepak. “I wrote the song like a conversation I would have had with him. He often appears in my dreams, I present my cynicisms, he gives me his answers.” Lal Salaam is about the journey of a girl who meets the singer of a song, and transforms her ideology. “It is about a common man becoming a communist,” the singer elaborates. But it doesn’t reflect his own ideology, Deepak says. “I don’t believe in any kind of ‘-ism’. There are things we don’t see, things that are hidden from us. I’m just trying to put them in a melodious form.”

Deepak has played with a blues rock band Faaka-Masti and has been in the music industry for nine-odd years, moving between his home in Khopoli, near Lonavala, Pune and Mumbai. When he turned solo, he began making Bob Dylan kind of ballads — the 1950s type. “The time was more poetic. I want my music to be relevant to the times I live in. Ten to twenty years from now, someone listening to it should know what it was like living in India in 2017,” he concludes with a smile.