For those about to Sufi rock

The Delhi-based band, Zikrr, blends Sufi and hard rock to create a genre-transcending sound, and they really know how it is done. 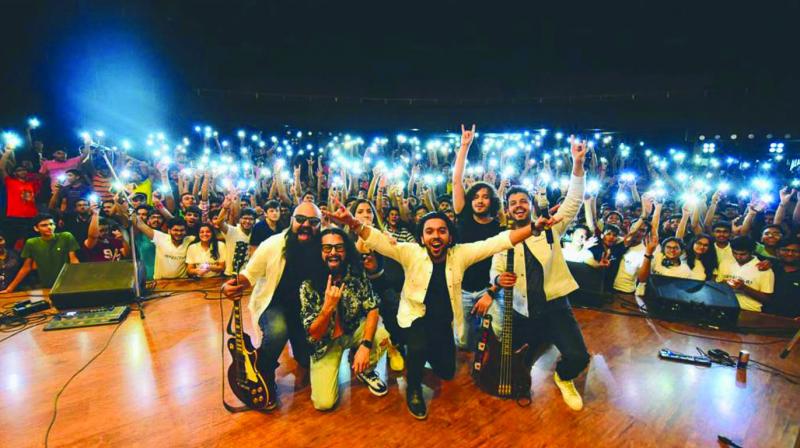 Based out of Delhi, Zikrr is an Indian fusion rock band that plays Sufi and Punjabi folk songs. Formed in 2012 by a bunch of schoolmates, this seven-member band has come a long way since then. Recalling the roots of the band, Zeeshan Saran, the co-manager of Zikrr says, “We started off playing at small stages and ‘battle of the bands’ to spread our name. We’ve undergone a few line-up changes as people left to pursue their individual music careers. So, after almost seven years of being on stage and travelling to almost all corners of the country to play, the current line up has settled in to being more or less the faces that define Zikrr.”

The main motive of the band was to reach out to the masses and become a name everyone has heard of, by providing the listeners with an experience worth talking about. “We all want to break free from the underground music scene and go mainstream but we still have some way to go to for that,” shares Zeeshan.

The band has already performed at all major Indian cities and also has a couple of international gigs under the belt. Recently, Zikrr was a part of an all-India tour as the opening act for Guru Randhawa. “We’ve played at almost every major food festival stages including the Grub Fest, Delhi Food Truck Fest, etc. We have played at some very prominent institutions including IIT Delhi, Kirori Mal College, Symbiosis, etc. In our journey, we’ve played at almost 700-plus shows,” adds Zeeshan.

Beginning with playing hard rock versions of prominent Sufi kalaams and other songs, the band’s main essence lies in Sufism. Their music is a mixture of various rock genres, which they try and blend with some Indian classical ragas and tunes. The journey of the band has also been a long and eventful one. Hailing from different walks of life, the members, in spite of all their differences — be it ideological or personal — have become a family. Their love for music unites them.

Talking about handling criticism, Zeeshan says, “If we as artists can’t handle criticism, then we won’t be able to improve our music.” The band doesn’t have an individual prodigy who carries the team but recognises themselves as a collective effort. “We are not outstanding or god-gifted musicians, but when we come together, we are a superpower. Our gigs don’t rely on individual brilliance but combined hard work. Criticism about our music is more than welcome but only if we see it actually helping us,” concludes the co-manager.