Stringing together a rich legacy

It wasn’t only Indira Gandhi who saw the grit and extraordinary talent in Jini Dinshaw. 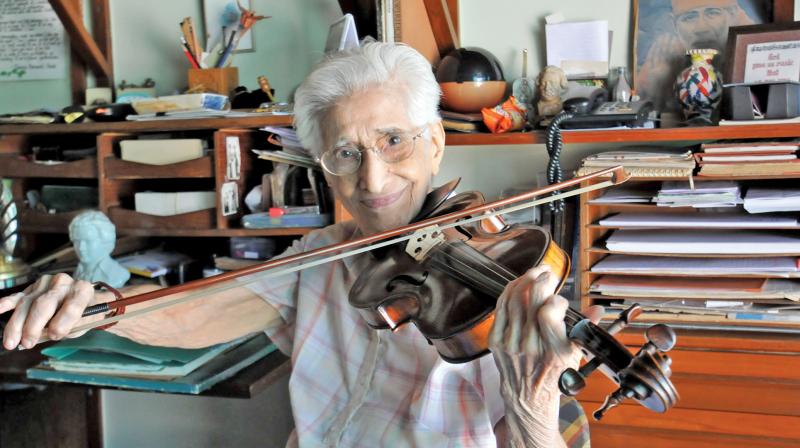 On stage, when she performs with the Bombay Chamber Orchestra, Jini Dinshaw, 86, is all fluid movements and nimble fingers as she coaxes beautiful melodies from her 300-year-old Italian violin. Sitting at home in her chequered shirt and bright blue pants, with the sun playing upon her hair and turning it silver, the octogenarian cuts a much more approachable figure. Freshly returned from a six to nine o’clock rehearsal for her next concert, which will take place on January 28, she sits surrounded by the musical instruments she has collected over the decades and recounts her musical adventures.

At the age of seventeen, when most young girls were thinking of weddings and babies, Jini decided that she would pursue her love for music instead. In 1957, she landed in London and completed the entire Royal School of Music course within two years, then moved on to their diploma courses. “After a couple of years, I had to come home for a while, but my brother-in-law insisted that I was being wasted at home and that I should continue my studies. So, I went back and got my diploma from the Royal College,” she recalls.

However, when she came back to India, the severe lack of an Indian orchestra left the artiste shocked at the predicament that Indian musicians found themselves in. It was at this time, in 1962, that the concept for the Bombay Chamber Orchestra took seed, with Jini as one of the founder trustees. “I saw so much young talent in the country that was simply being wasted. I wanted to give them a platform to perform and also give them some higher degree of training. So, students of grade 6 and above would come to me and eventually be taken in as a part of the orchestra,” she explains, adding that many of her senior students have now taken to teaching the younger generations of musicians.

Originally a violinist, when Jini realised that there was a dire lack of cello teachers in the orchestra, she took a trip to Switzerland, and after a month of guidance from a cello teacher, came back to India and taught herself the cello. “I would practice two hours a day, everyday. It was much easier to learn the viola, where only the notation system is different from the violin and not the technicalities. Now, the cello and viola sections in the Chamber Orchestra are all my students,” she says with a twinkling smile.

It is not only seasoned artistes that the violinist teaches. Between 1969 and 70, the string-instrument virtuoso went to Salzburg, Austria to learn a special technique for teaching children between the ages of four and eight years —the Orff the Schulberg technique. “I now offer two-year courses of ten lessons wherein the children learn how to read music, keep count and even create basic tunes. Once they are done with this course, they take up their principle instruments. Many go for clarinets, oboes and flutes, some take up the violin or the cello,” she says, adding that she also has an orchestra comprising only children.

One endeavour with children, which the musician recounts with special fondness, is a production she had done with 20 slum children from Dharavi singing The Sound of Music songs along with the Bombay Chamber Orchestra. The children were specially trained by a teacher from Vienna for the event, which was then made into a documentary, and screened across the globe. What Jini remembers though, is not the glory of having her orchestra’s fame, but the quirks of the children. “Everyone wanted to adopt the little boy who was the lead singer of the group,” she says with a laugh. “I also remember, that they had never seen how a modern toilet functions and they marvelled over how a flush works. It might seem funny, but it’s really sad. We do not have schools to teach music to such children. The music schools that we do have can only be afforded by the rich,” she laments.

Another complaint that the Chamber Orchestra trustee has had since the inception of the orchestra, are the taxes that are levied upon the organisation despite their being a charitable trust. “We are a registered educational charitable trust and we still have to pay a 20 per cent tax for entertainment and another 15 per cent for full-house shows. I have written countless letters to both the central and the state government about this, but to no avail. The Delhi government insists that this is not their forte while the Maharashtra government says that western music is not a part of our culture. This is why China, Korea, Japan and other countries have orchestras full of people of their own nationalities and we do not,” she vents. Interestingly, she points out that, despite being comprised of mostly foreign members, the Symphony Orchestra of India is more generously compensated, even though it does not hone local talent in quite the same way as the Bombay Chamber Orchestra does.

However, Jini’s words were not always ignored by the government. One Prime Minister paid heed to her words and immediately exempted her from taxation. She recalls, “I had asked for some instruments to be donated by the British Council and the Max Mueller Bhavan and they said that I would have to pay taxes for them. Indira Gandhi, who was Prime Minister at the time, was a huge fan of Bach herself. So, when my letter reached her, she immediately replied and said that I would no longer have to pay taxes. On October 21, 1984, the Bombay Chamber Orchestra performed the inaugural function at Tata Theatre, NCPA and she personally flew down from Delhi to watch it. Ten days later, I heard that she had been shot. I was shocked!”

It wasn’t only Indira Gandhi who saw the grit and extraordinary talent in Jini Dinshaw. The Queen of England, Elizabeth II herself honoured her with the title of Member of the Most Excellent Order of the British Empire (MBE) after a collaboration between a London ballet troupe and the Bombay Chamber Orchestra — the first of its kind to be hosted in India. Wiping the dust from her old certificate, she says, “It is sad that foreigners have recognised what I have done for our community, while our own government continues to ignore our endeavours. Sometimes I wonder what will happen to the Orchestra when I am no longer around. My students and co-coordinators assure me that they will take up the mantle though, and I have faith in them.”