A score by composer Anoushka Shankar, daughter of late Indian sitar maestro Ravi Shankar, has also been added to accompany the silent film. 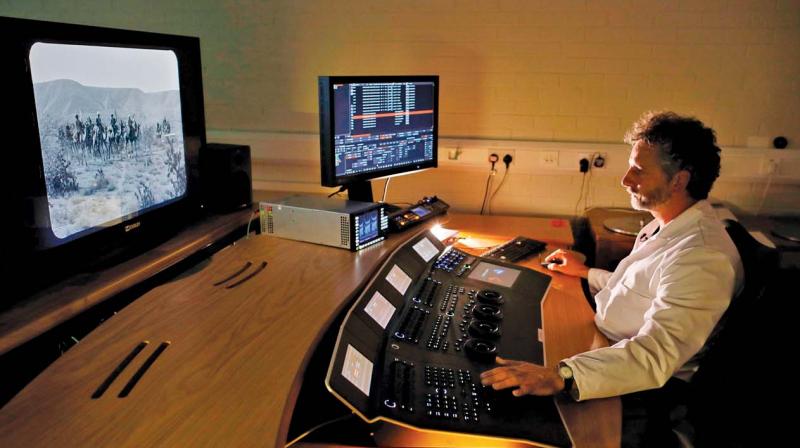 A technician works on a computer to digitally restore individual frames of a film at the British Film Institute in Berkhampsted, north of London. (Photo: AFP)

Berkhamsted: In a refrigerated vault outside London filled with old film reels, a team of curators is bringing to life forgotten masterpieces of early cinema history.

A chemical smell hangs in the air at the British Film Institute’s National Archive, where some 250,000 wheels of old film are stacked floor-to-ceiling.

“As we’re restoring them we’re pulling back the veils of history, and we can see much more clearly than we used to,” curator Bryony Dixon said on a visit to the archive in the town of Berkhamsted this week.

A selection plucked from the shelves is being showcased at the BFI’s London Film Festival, including a tale about the heartbreaking Indian love story of the Taj Mahal mausoleum.

“Shiraz: A Romance of India’ is being screened at a gala on Saturday for the first time since its release in 1928, following months of restoration.

A score by composer Anoushka Shankar, daughter of late Indian sitar maestro Ravi Shankar, has also been added to accompany the silent film.

From hand to digital
BFI curators have restored a wealth of films including Alfred Hitchcock’s nine surviving silent films and footage of a legendary Everest expedition in 1924 in which two of the climbers died.

Despite technological leaps, preparing the film begins with it being checked by hand.

“There will be a lot of hand, manual repair on the original film copies, using tape to make sure the films can pass through cleaning machines, and also through the scanner,” said Kieron Webb, the archive’s film conservation manager.

The team used the original camera negative of “Shiraz”, along with a copy made decades later, which were combined digitally to obtain the best images and restore tens of thousands of frames.

“The removal of scratches and dirt; de-flicker, which makes the image look more stable; reduce the light and darkness changes in some shots,” said Mr Webb, summarising hundreds of hours of work.

Ben Thompson, an image quality section leader, demonstrated how to remove a scratch from a “Shiraz” scene without accidentally brushing out a horse’s leg.

Restorers have also sharpened the images, which Mr Thompson said creates more work: “As soon as you improve the sharpness of the image it reveals, brings into sharp focus the detail but also the defects.”

Digital techniques, which have replaced much of the old photo-chemical processes, have enabled restorers to become more precise in their work and upgrade every single shot in a film such as “Shiraz”.

‘A fantastic record’
The Indian film is nearly 90 years old but BFI also holds films going as far back as the 1890s.

Despite the films’ age, curators said they were easier to restore due to their brevity.

“Some of them are only a minute long,” Mr Dixon said.

“With the 1920s it gets much more complex, because the films get longer and they have a grammar to them which means if you’re missing part of the film print, you have to sort of compensate in order to make it understandable for the audience.”

Colour and sound add further layers of complexity, although silent films are themselves problematic because they often lack any documents to dictate the speed they should be shown at.

Restoration is a costly endeavour and the archive relies on public funds and private donors, as well as ticket sales from screenings. But the restorers say the cultural value is boundless, giving audiences a window into an unseen age and places that have since disappeared.

“Fiction film, or non-fiction film, is this fantastic record of the whole of the 20th century that people can look at... It is, for those that care to look, a real experience,” said Mr Dixon.