Entertainment   Music  18 Dec 2017  Some of the lyrics in a few songs are mine, says AR Rahman
Entertainment, Music

Some of the lyrics in a few songs are mine, says AR Rahman

In the city for a concert, maestro A.R. Rahman chats about the benefits of technology, composing on the fly, writing lyrics for his songs and Mumbai. 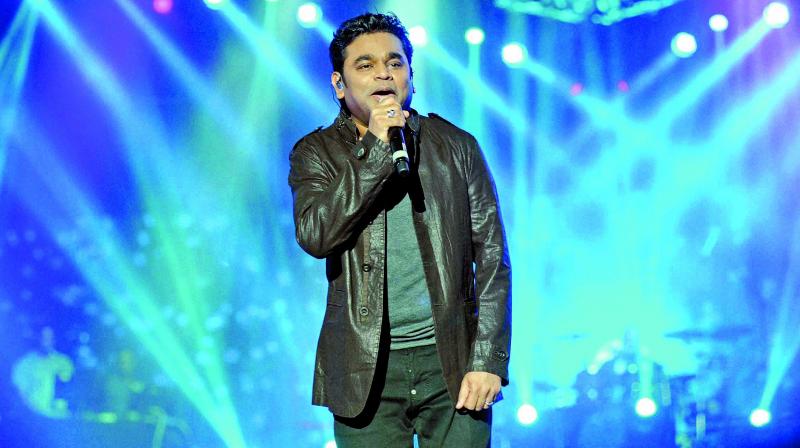 The name A.R. Rahman hardly needs an introduction. From the innocence of Dil Hai Chotasa and the soaring patriotism he evoked with Maa Tujhe Salaam, to Jai Ho which bagged him his Oscar and the gritty rock and roll that he churned out with Mick Jagger in Superheavy, there is no genre that the artiste has left unturned. The ever-curious Rahman, who recently took to the role of director with a virtual reality film Le Musk, was in town for one of the biggest concerts of the year, as part of his multi-city Encore tour.

Cutting an unassuming figure as he patiently and precisely answers a barrage of questions, Rahman admits that he’s touched by the fact that it’s a full house. “I didn’t know Mumbai would have so much love for me. Setting up the whole thing took time but now it feels like we have a good set prepared and we would like to give back to the people who have given us so much of love,” he smiles.

Despite being someone who spends hours upon hours perfecting songs at the studio, the artiste said that there is a different thrill to perform for a new audience every time. “Each city is different. Sometimes, for a certain song, we’ll get so much ovation. What we expect doesn’t happen and what we don’t expect does. It comes as a good surprise,” he explains.

Dividing time between live performances and studio hours is not an easy balance to keep and the composer often finds himself sketching out melodies on the go. The peace and technical gear of a studio, however, is definitely the preferred set-up for Rahman. “To sketch something is easy when you’re on the go, at a hotel. But to sit sown and arrange things, I’d always prefer a studio. And of course every city has a studio where I can go — Mumbai or Chennai,” he says. “This tour is not like how we did it a couple of years back when we had a couple of concerts every week. Since they’re bigger concerts, a lot of organising goes into it. So I have enough time to go back to the studio.”

Though he never shirks from trying on new roles, whether in the world of music or cinema, Rahman has officially written very few songs. With the story of 99 Hours already under his belt, would he consider writing some of his own lyrics, we ask. “I already do a couple of things anonymously,” he says, with a laugh. “Some of the lyrics in a few songs are mine, unofficially. I think because I got to work with so many greats — Vairamuthu, in Tamil, Javed Akhtar saab, Majrooh Sultanpuri saab, Gulzar saab — sometimes the way they think sticks to you and you start writing lines.”

Rahman, unlike many composers of his time, has evolved with the times — tailoring his music to fit the era and the technical advances. Technology, he says, should be explored. “If we ignore any progress and say, yeah, that’s not for me, then finally it (progress) will ignore you. So we have to see what is there and then, if it’s not good, you just throw it away. If it’s good, you can use it; you can conquer it,” he says, philosophically.

Perhaps it is this philosophy that led the artiste to the world of virtual reality and his film Le Musk. From a vague idea formed from a conversation with his wife, the film has taken shape to become the first Indian full-length feature using the medium. “I have been fascinated with cameras for the past six years and then I was talking to my wife one day. She’s a big fan of perfumes and she can recognise any perfume. So, she told me, you’ve made 99 Songs, why don’t you do a movie on perfumes? So, on the fly, I was trying to figure out the story, about the little girl and other elements. And it became a reality when I first saw the virtual reality gear. Everyone told me that the idea’s great and everything fell into place. So, now, we have finished shooting, we’ve cut the almost two episodes and one more is still remaining,” he recalls.

As someone composing in an era of ever advancing technology, however, Rahman has not forgotten his roots, even as he looks to take his music soaring to new technical heights. “Once you become a musician, it’s all about harmony, melody and textures. The rest is all fine, as additions. If you have a movie, you can expand it to surround sound. And headphones can take it to a whole other level, with virtual reality, you can have alphasonic sound — the possibilities are endless,” he signs off.