The finest exponent of Dagarvani Dhrupad 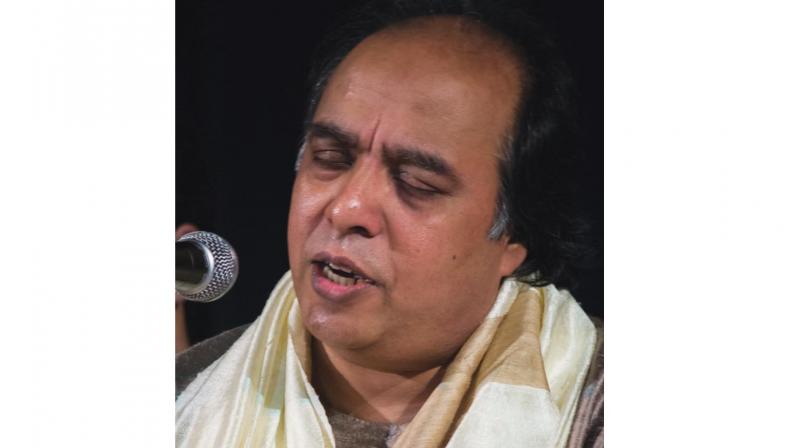 Ustad Wasifuddin Dagar is the son of Ustad Fayazuddin Dagar, one of the two Dagar Brothers who are largely regarded, along with their older brothers, the Senior Dagar Bandhu, as having initiated interest in Dhrupad in the West. The Dagar dhrupad tradition descends from Swami Haridas, the Guru of Mian Tansen in Emperor Akbar’s Court. Several branches of the family settled in various States all over India, amongst others, in Mewar, Jaipur, Alwar, Indore, and later, Calcutta and Delhi.Dhrupad is regarded as the most difficult form of music; the singing involves tremendous voice control, and strict adherence to the rules of expression. Music is taught through the Raga, not through the composition, as is now the norm. The unfolding of the Raga is done through an “aalap” (a note by note exposition of the Raga without rhythm) which is nowadays not done by vocalists who sing khayals (a style that evolved later, and is in a lighter format). There were originally 4 styles of Dhrupad – the Gaurahari, Khandari, Nauhari, and Dagari.

Arguably, today the finest exponent of Dagarvani Dhrupad, Ustad Wasifuddin Dagar is a modest man. Intense, spiritual, with a wry sense of humour, Wasifuddin also loves cars and good food! His recent recital at the Capital’s Triveni Auditorium, at the Hindi Academy’s celebration of Holi and Basant (somewhat belatedly, as the Season of Basant is at an end, as he observed before his recital) was jam packed full. A recital of an artist of his calibre is always eagerly awaited; the calm peaceful mood he effortlessly creates is somewhat unique in today’s recitals of swift gimmicky music. Classical music of this stature has to be given the respect it deserves; the attitude of listening when one wants, walking in and out of the hall, from right in front disturbing the artist, distracting flash photography  - all these are now part of the scenario in most concerts which are truly deplorable.

The concert started an hour late, the arrangements were appalling, with a banner being put up on stage while an expectant audience waited patiently for the Ustad. The announcer, unaware of the niceties observed at a classical music concert, exhorted the audience to “thunderously clap” a welcome to the artist! While the Ustad was trying to tune his tamboora, she informed us what he was doing, keeping up a patter that did not give him the silence he required to tune his instruments. The Chief Guest (an eminent writer) walked on to the stage with her shoes on, unaware of the solecism she was committing. Throughout the recital, she fiddled with her phone which loudly rang twice. The sound system had not been dealt with; the technicians were not aware what the number of the main microphone was, so were unable to raise the volume, or the bass as repeatedly asked by the artist. None of the organizers thought it their duty to intervene and help adjust the sound system. Despite all this, Ustad Wasifuddin Dagar being the undisputed master he is, rose above the aggravations he was subjected to and presented a superb recital. He started the concert with Raga Shree, one of the 6 main Ragas, a dusk Raga of enormous solemnity and grandeur. The opening use of the signature “re pa” literally brought the very essence of Raga Shree to the listeners. It is truly only a master who can instantly convey a Raga’s form with just the enunciation of 2 or 3 notes. His slow meditative aalap, without the use of light adornment of the notes created a powerful ambience. His gamaks are magnificent and literally leave one breathless. The dhammar taal (14 beat) presentations were exciting and full of drama. The next Raga he sang was Raga Basant, the Raga of Spring, in which he presented two compositions, both Holis, suitable to the occasion. The first was a chautaal (12 beat) followed by a dhammar bandish. After Basant, the maestro sang Raga Bihag, again a wonderful holi composition dealing with Lord Krishna playing holi with the gopis. He ended with Raga Bhairavi, a composition in the 10 beat sooltaal, on request, a composition attributed to Nayak Baiju, popularly known as Baiju Bawra, a contemporary of Mian Tansen. The uplifting lyrics were “Tu Hee Brahma, Tu hee Vishnu”. The audience expectedly gave him a spontaneous heartfelt prolonged standing ovation. Accompanying him on the pakhawaj was Pt Moham Shyam Sharma who provided excellent interactive support, taking the concert to greater heights. One felt ashamed that despite having such an enviable, unmatched musical tradition in India, our Government does not now know how to honour it, forget nurturing or propagating it. An artist of such eminence, of a family that has maintained a musical tradition of over 500 years is treated so cavalierly, without the organisers even being aware of what they were doing.