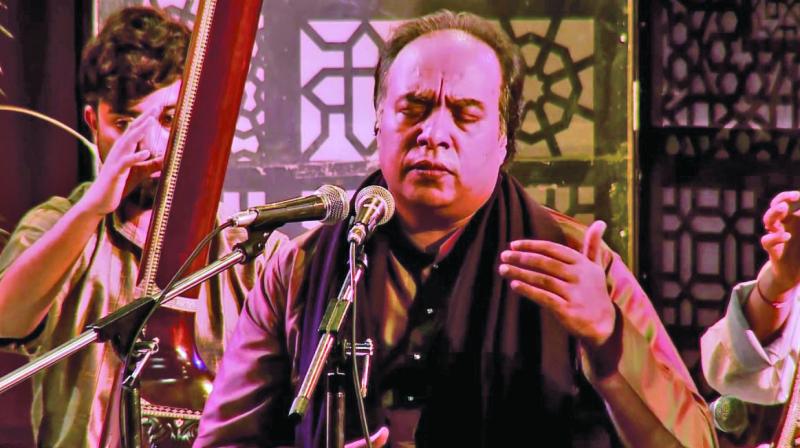 Dhrupad, the oldest form of Indian classical music, has many patrons, not just in India but world over. However, it’s very intricate form of music and can swiftly lead one to divinity.

When one gets to sit with none other than the finest exponent of Dagarvani Dhrupad, Padmashree Ustad Faiyaz Wasifuddin Dagar, along with the doyen of Rudra Veena Pandit Rajshekhar Vyas, the discussion is bound to traverse along the lineage, culture and style of this ancient form of Indian classical music.

Ustad Wasifuddin Dagar, the torchbearer of 19th generation line, is known to have descended from Swami Haridas. An extremely modest person, Dagar also indulges in calligraphy and shayari.

Sitting in his living room during a family chat, he recalls how his ancestor Ustad Allahbande Khan was once asked about the purity of “sur” (note)– “Sahib sur ki sachai kya hai?” (What’s a pure note?).

He is known to have replied: “jiska jitna imaan sachha, uska utna swar sacha  (The purity of the note depends on the soul’s integrity) - such was the attitude towards music those days.

Pandit Vyas explains when notes begin to converse, they create energy. The nature, temperament and the texture of the notes start ruling the environment during the performance and this evolves a plethora of emotions for both the performer and the audience.

Dagar too reveals that when the note brushes each other in a raga even with a light touch, an aura is created. One can feel of touch based on how the notes are played.  During some of these very special moments, it has been observed that even notes wait to speak out and be heard in their own exclusivity.

“When we practice a note, we often try to touch it from the bottom of our hearts. Our ancestors have however advised us to refrain from touching such pure things (notes), which can lose their sheen at a mere glance,” he opnies.

This oldest form of classical– the mother of both Carnatik and Hindustani music has drawn many students from Russia, Europe, America and Australia to the subcontinent.

Thanks to the Dagars for spreading this oldest art world over. Dhrupad, derived from the words Dhruva (immovable, permanent) and Pada (verse), an interpretation that signifies the pillar of classical music. The roots of Dhrupad are ancient and are discussed in detail in Natyashastra (200 BCE – 200 CE). One can alos find its mention in other ancient and medieval Sanskrit texts like Bhagavata Purana.

Dhrupad emphasizes on maintaining the purity of the ragas and swaras and is mainly performed to invoke divinity.

Wasifuddin’s father Late Ustad Nasir Faiyazuddin Dagar would only sing with his brother Ustad Nasir Zahiruddin Dagar as Dagar Bandhu. Their two elder brothers were also called the senior Dagar Bandhu - Ustad Nasir Moinuddin and Nasir Aminuddin Dagar. They first took Dhrupad gayeki to Europe, Japan and West Asia in the late 1950s. Rest is history and the art has flourished across continents.

It is believed that due to much unrest during the revolution, he was asked to seek refuge in some other princely state. At the age of 100 Baba Bairam Khan is known to have traveled to the court of Alwar along with some 200 students. Even Alwar was not ready for him and finally he reached the court of Sawai Man Singh II, where he lived till 121 years. The great Baba Bairam Khan’s contribution to the long and slow stretches of alap has brought about aesthetic beauty to this pure form of classical music, Dagar remembers.

“My great grand father and the maharaja passed away on the same evening. The maharaja is believed to have said: “Is tarah kadardaan maine nahiin dekha”  - about Baba Bairam Khan. He would not take more than Rs 60 and with that money he would feed all his students. Baba used to sit on one chabutara (platform) and all his students would sit around him in a circle. There was one caretaker who was also in his 80s. His job was to cane students who would make mistakes with a wrong beat or a note. The caretaker would summon the students to come to him to get caned,” laughs Dagar, adding,  “We were always told to remember the notes and refrain from writing.”

A raga, says Dagar, can get over within 10 seconds with the most complex notes, but how we stretch the raga brings out the true interpretation. Like every alphabet has a sense of space to form a word, every note has a sense of pace, space too. He beautifully uses the metaphor of “Swaha” used in every Hindu ritual and connects it to music. “The way swaha, which is the better half of agni (fire) surrenders itself before the fire in every ritual, we need to surrender ourselves to every note to create music,” he says.

For him every drop is a swara and silence is nothing less than majestic. When notes rub each other, energy is created, while the vibrations remain.

Drupad imbibes both style of softly and peacefully improvising of swara followed by powerful yet intricate gamaks.

For Pandit Rajshekhar Vyas, who has learnt under the Ustad Ziauddin Dagar and son Ustad Zia Moiuddin Dagar, the contribution of Dhrupad to Indian classical music is simply unmatched and there’s a need to understand, and preserve this.

Pandit Vyas is gifted with innumerous talents and incredible insight in various fields of History, Literature, Music, Art and Architecture and was honored by President Dr Rajendra Prasad for his achievements in Indian classical music in 1954.

Pandit Vyas follows the same principles and has carried out a research on the concept of his guru Ustad Ziauddin Dagar in an attempt to keep this art alive.

Today this 72-year-old musician is comprehensively indulged in conceptual writings and behaviors of Rudra Veena and Dhrupad.

For him Dhrupad is a well balance of swara vistara and gamak. “Goddess Parvati’s veena and Lord Shiva’s damru (percussion) have created the music on earth. The damru signifies gamak while veena signifies swara vistara.

Recalling the princely days, Pandit Vyas says: “In 1948, when hunting was still in vogue, there was one such party in the state of Mewar, where the jalsa began at 6 pm. Ustad Ziauddin Khan Dagar and Ustad Nasir Mohiuddin Khan Dagar were present. Everyone was served drinks and Ustad Ziauddin Khan Dagar who was a connoisseur of spirits and a big foodie was served drinks and made to promise His Highness to sing well. Ustad started singing at quarter past 6 pm and sang on till the crack of dawn. His Highness finally had to intervene, whisper to the guard asking him to whisper a message to the ustad’s ear  – “Ustad maya sameto nahiin to subah ki chaar bajega aur tumhari khana sab thanda ho jayega”  (Please excuse us from your mesmerizing rendition, lest the food gets cold as you swiftly usher in dawn)  - such was the power of his music.

The divine, claims Dagar, is omnipresent among all three octaves. If one can cross all, one would reach the universal spirit of samadhi. “That’s music.”

We don’t know what fascinates us. Music hits us and evolves us but doesn’t hurt us.