The sky's the limit

Thiruvananthapuram-based band Adholokam’s first single Pakshi is an ode to the efforts of passionate artistes to realise their soaring dreams. 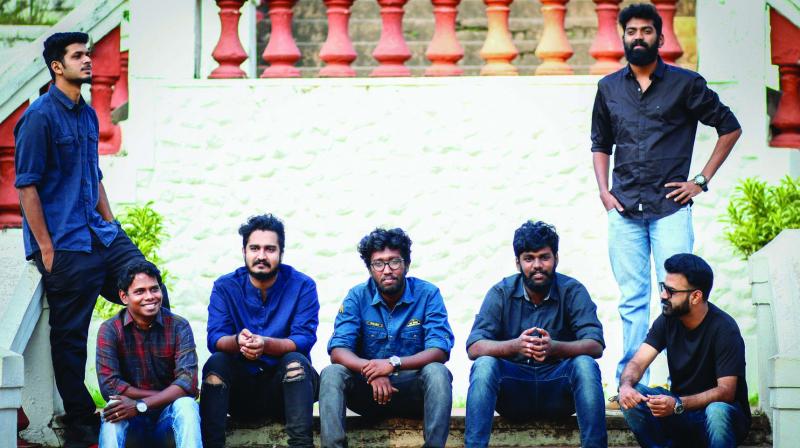 It is one of the most prominent and fast-growing bands from the state of Kerala. Since the inception of Thiruvananthapuram-based Adholokam in 2014, they have been grabbing a lot of attention on the South Indian indie music scene. The band is more than the ‘underworld’ (the meaning of its name in Malayalam). Known for their quirky way of using instruments, the seven-piece ensemble is making waves. And now, their first single is ready to capture the imagination of music lovers everywhere.

“Pakshi is an attempt to draw the attention of our audience towards the analogy between the struggles of human beings who strive passionately to achieve their dreams and a bird which learns to fly by conquering heights and crossing all the barriers,” says Akshaynath MS, lead vocalist and one of the founder members of the band, offering an insight into their thought process. While the band has had many changes in the line-up, their first song features Akshaynath MS as lead vocalist, Rishikesh Viswambharanon on the guitar and backing vocals, Amal Balan doing bass, Sreemonon playing lead guitar, Christy Aby Varghese on keys, Viswajith Sajeev on drums and Ram Kumar with percussion.

Though the band performs alternative and progressive rock, all the members are well-versed in Carnatic music too. “Our base is in classical music, but when we started off, we did some covers and composed songs in alternative slow rock. One might feel there’s irony in this. While we were thinking about releasing our first song, Pakshi, we wanted to keep that ‘Indian-ness’ in it. Of course, there is the rock flair in the background though,” he explains.

It was the common dream of a group of friends who wanted to be rock stars that resulted in the formation of Adholokam. “The very idea behind our band’s formation was to express our unique style of music. We were all friends and during our academic days, used to compose our own songs and represented our college in festivals. But we were not ready to restrict ourselves by just remaining a normal boyband. We wanted to go full time and, hence, decided to form the band. The name had to be catchy, hence Adholokam,” recalls Akshay about how they came together.

Releasing the first song is not child’s play and Akshay remembers all the efforts, “Being the first song, it was a make-or-break situation for us. There was no room for error. The time we released the song was when a lot of indie music bands were starting to bloom. So, to get attention, we had to make sure that we gave our best. Also, we wanted to do something that sends out a message about our struggles too. Pakshi was perfect. It was me and Rishikesh, our guitarist, who wrote the lyrics. You write a song and want to move the world. So, you record and distribute it as a single to platforms like YouTube. It is not easy as one thinks,” he says.

Adholokam’s growth owes much credit to the way they managed their online marketing and the way they used the scope of video and audio streaming platforms. Akshay sees a change in the acceptance of rock songs and the loud nature of the music. “It is not ‘Satanic or loud noise’ anymore. People are open to different genres and that is good for indie bands like us,” he smiles.