Flagging off a new row

Chris Martin’s flag act on stage drew much cheer from fans, even as politicos fumed. 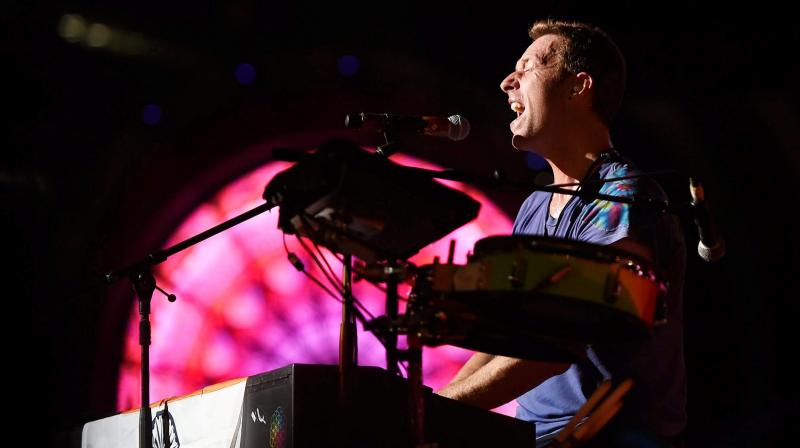 When 24-year-old Mihir Chheda managed to reach MMRDA grounds, BKC for the Global Citizen India extravaganza, he was over the moon. Even as Coldplay took the stage, an excited Mihir was all eyes towards the stage, as was the 80,000 strong crowd, and the audience watching the live telecast.

Soon, Chris Martin, frontman of the band was crooning some of Coldplay’s biggest hits, and in the frenzy of performing live, took one of the many Indian tricolours dotting the stage and tucked it into his jeans’ back-pocket. As he pranced up and down the stage, Mihir and many others present realised that this was going to be the beginning of a new controversy. “When I saw the flag in his pocket, all the controversies we’ve seen in the same context earlier came to my mind, because this is India. We have a knack of getting offended easily.”

Mihir’s words seemed ominous, as NCP leader Nawab Malik has demanded an unconditional apology from Chris for insulting the national flag. He also asked Shiv Sena and BJP leaders present at the site to issue and apology.

An incredulous Aakar Patel says, “It doesn’t matter if he tucked the flag in his front pocket or back. Asking for an apology, in this context is simply abuse of mob power, by trying to force someone with threats.”

The flag act incidentally is something Chris does in all the countries he visits, and it’s never an issue elsewhere. Sociologist Nandini Sardesai believes that that is enough reason for the organisers, and not Chris, to be pulled up. “The organisers would’ve known about the fact that he usually performs with the host country’s flag on the stage and should have warned him about it,” she asserts. “And if they haven’t, this denigrating of the national flag, the onus is not on him. The very fact that he was not informed earlier is like leaping before you look. You’ve called him, organised everything, but you’ve not things out, quite like the demonetisation exercise. Why ask him to apologise? The whole brigade of organisers and sponsors must apologise.”

Adds Aakar, “I think it’s Nawab Malik and not Chris Martin, who should have received some form of briefing. It’s shameful to see a member of a political party making such regressive and damaging comment. These kinds of comments are actually damaging in the long run for our nation.”

According to eyewitnesses at the concert, a couple of songs into his flag act, Chris took the tricolour out of his pocket, purportedly at the behest of organisers.

However, the fact remains that Chris could well be in legal trouble in India, if lawyer and activist Y.P. Singh is to be believed. “Chris Martin’s act is tantamount to insult and showing disrespect to the national flag under section 2 of the Prevention of Insults to National Honour Act. What remains to be seen is if it was unintentional and accidental. Only when an FIR is filed, can one proceed further,” he explains.

Comedian Cyrus Broacha groans when asked about the incident and believes politicians should better utilise their time. “Intelligent people should not be having this conversation at all,” he states. “Why are politicians wasting their time over this issue when the country has many important issues to deal with? Why aren’t they discussing the Kanpur train mishap and why aren’t they on the streets helping people with bottles of water, biscuits and help them with ATM machines. If the guy (Chris) had any malicious intent he wouldn’t be in India in the first place and politicians should think of better things to do with their life.”

Mihir who stayed on till the very end states, “Chris took a flag later, attached to a pole, and he carried it thereafter with utmost honour. He meant no disrespect on his part at all and if people raise a finger on him, ask them what do they have to say about Chris singing Maa Tujhe Salaam and Vande Mataram? Out of all his concerts so far across the globe he has never collaborated with an Indian artiste. That was his sign of respect towards India. It was a dream come true to watch him sing glory to our nation,” he declares.

Controversy’s children
Sachin Tendulkar: The master-blaster caused a furore when he was asked to cut a cake that had the tricolours during a function in the West Indies, organised by the British High Commission, where the Indian team was playing a series.

Mallika Sherawat: Mallika got in trouble when two citizens from Hyderabad filed a petition in court against her for insulting the national flag in her film Dirty Politics — she had wrapped the tricolour on her body on the movie poster, and was seen sitting on the roof of a car with a red beacon.

Sania Mirza: Tennis player Sania Mirza found herself in the flag controversy, thanks to smart photography. Mirza was pictured sitting with her bare feet that appeared to rest on a table next to an Indian flag. As many saw this as an act of showing disrespect to the Indian flag, she had even thought of giving up playing tennis to show her respect to the national flag.

Narendra Modi: As Prime Minister Narendra Modi was busy performing asanas during the grand celebration of International Yoga day, he wiped his face using the tricolour scarf. A social worker from Pondicherry lodged this complaint against Modi.