Ambi’s next big concert is at the Dover Lane Festival in Kolkata on January 23. 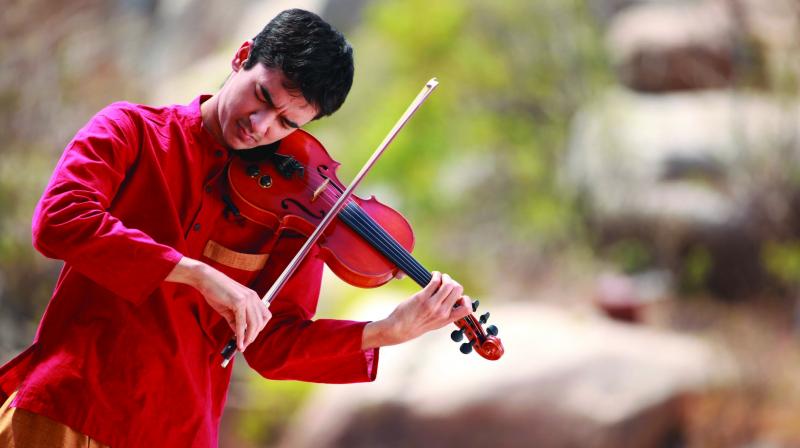 When you meet 26-year-old Ambi Subramaniam, you think he is just any Gen X youngster, until he picks up his violin.
Amazingly sensitive, practised and hugely talented, Ambi Subramaniam is already a recognisable name in the world of violin. Youngest son of Padmabhushan Dr L. Subramaniam, Ambi has been performing since the age of six. His first album, released in 2007 when he was a mere 16 years old, won both BIMA (The British Interactive Media Association, which annually gives British awards for excellence in the digital world) and GIMA (Global Indian Music Academy award) awards.
Excerpts from an interview:

Q. Is the violin you play different from violins played in Carnatic music?
A. The violin is the same, whether it’s used in Western or Indian music. Mine is a five string as opposed to the usual four string, and is electro acoustic, which means one can either mic it, or use it as it is. The wires are “sa pa sa pa sa”, the last string is a viola string (viola is part of the conventional quartet — violin viola cello and bass) from which I get a bigger range. This violin was given to my father in the 1980s. The company had invented these five-string violins which I think add a lot to Indian music. A lot of Indian music is in the mid range. Western violin’s are tuned much higher than ours, their lower string is G and ours is usually D. Some jazz musicians in the West do use five-string violins, but traditionally, all violins are four stringed.

Q. Do most violinists use violins sourced from abroad?
A. Mostly we all use violins which are made in the West. It’s an instrument that requires a huge degree of expertise. In India, there are good violin makers, but I think a little more mentorship and guidance in the technique of making violins is perhaps still required. We have good violins, but they are not the best. Though there are some very passionate violin makers here.

Q. When did you first start your concert playing?
A. I first played with my father when I was six and I have been learning from the age of three. From the age of 13 years onwards, I have been regularly playing in concerts all over the world. (Ambi lives in Bengaluru)

Q. You play Western music too, yet are a Carnatic musician. How come?
A. I have learnt Western classical music and do play concerts of Western music too. Since I started playing in both systems early, I have absorbed the different techniques, even though they are not complementary. My father has developed techniques and ways that are complementary in both systems.
At different times, I concentrate on different music. If I am practising a Western scale, it helps my Carnatic music — my left and right hand techniques used in Carnatic music help me play Bach better. The bow technique in the West is very developed; they use the full bow, this helps me in Carnatic music. It’s a challenge as a violinist to get the best of both systems.
A lot of the work I have been doing for so many years is to bring both the systems of music together. It’s not only Carnatic and Western, I love Gypsy music, Irish music. My sister Bindu and I have collaborated with flamenco artistes. The challenge is to absorb different music, yet you should have your own sound. Within a few minutes your audience should know it’s you playing. Your sound should be distinctive. I don’t think I need to choose any one type of music.
I play the violin because I love it and I try to manage my time as best as possible. I also learnt how to sing and play the piano.

Q. You frequently play as part of a musical ensemble too. Please tell us more:
A. I think ensembles make very good music together; if only the melody leads all the time, the audience gets to hear only one point of view musically. The percussionists and accompanists too lead at different times, and I think that is interesting. I believe music is collaborative. I feel every artiste on stage should be given his space. I love being on stage; you hear the sound of your violin filling the space…it’s a wonderful feeling. I also enjoy preparing for the concert. The satisfaction one gets in executing something well is an unmatched feeling. Playing with other musicians and taking the music further; it’s a great feeling.

Q. You and your sister are very active in the field of Music education. Please tell us about that.
A. Our parents set up a music academy, SAPA in 2007. We are passionate about education in music; we have had exposure and seen and heard the best artistes from around the world since childhood. We want to expose other children to the best as well so we have devised a global curriculum, rooted in Indian music, not only classical, also folk. We want to make music fun; we work a lot in training teachers to engage with young children. We have a series of books for different levels of teaching. As a musician I feel I need to give back; for Art to flourish, we need to do our part. Many other musicians support our efforts. We have about 150 kids at our own academy, and also interact with children in different schools; we interact with around 20000 children.

Ambi’s next big concert is at the Dover Lane Festival in Kolkata on January 23.