Young, talented and all set to take over the world with her voice, Kamakshi Khanna has her musical priorities straight. 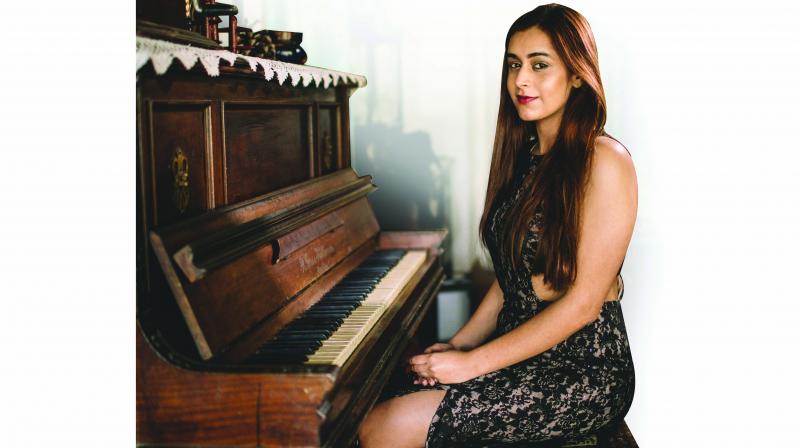 While her maternal grandmother, mother and sister all had a flair for singing, Kamakshi Khanna is the first woman from the family to go ahead and make a career in music. The Delhi-based singer-songwriter plays RnB, soul and pop music and creates beautiful, hummable melodies with meaningful and relatable lyrics.

She was 12 when her music teacher spotted her talent and pushed her to pursue it with seriousness. “Be it dance, arts or academics, I was average at everything. In my school, I used to spend more time in the music room. I didn’t feel any passion towards other things.  Earlier, I was quite shy and music helped me make friends, gave me recognition. That is why it is much more to me than a career,” says the psychology graduate.

She went to a music school and even took private lessons honing her skills in classical vocals, jazz, harmony, arrangements, making charts—in a nutshell anything that would help her create contemporary music. At 13, she was chosen to be a part of the Mozart Choir of India, an initiative by Pt. Ravi Shankar and Gerald Wirth. She toured Austria and India, singing western and Indian classical music. And while she introduces herself as an RnB singer, she hates being ‘put in a box’.

“I am influenced mostly by RnB. I find it hard to pick a genre to define my songs. It is for others to decide as I create something I strongly feel for. I get inspired from all kinds of music,” says the die-hard A R Rahman fan.

She released an EP titled Much Mellow in 2014 immediately after graduating, and last year, her debut album Cakewalk was out. As a part of the album launch tour, she did shows in NCR, Mumbai, Pune, Chandigarh, and Bengaluru. From the album, she came up with two-music videos— I’m In My Own Way and I Tried — in the end of 2017.

“I thought of putting out the sound first and giving audience a visual identity later. Maybe next time, I will do it the conventional way. The reception has been fabulous, I bump into fans in places where I never expected,” says the singer, who also released a single called Breathe, for TLC India’s The Poetist.

For a couple years, she was the band Euphoria’s back up vocalist and toured nationally and internationally with them, while continuing to sing in her college choir. And in 2015 she made her Bollywood debut with Palash Sen by singing the Sautela Shehar from the movie Aisa Yeh Jahaan.

“My association with Palash taught me what the professional music industry is all about and what it takes to stick together as a band,” says one of the top six contestants on English singing reality show, The Stage.

“For someone like me, who caters to a very niche audience, the show helped me reach more people. I don’t want to sing covers and be on TV but the show certainly helped me grow as a performer,” she adds.

Kamakshi has her own collective and was a member of a band named River (now defunct). On being questioned about working solo compared to in collaborations, she says, “I would want to be part of a band but it is logistically difficult to be working with others. Especially, when it comes to writing, I like to shut myself in a room and write.”

At 24, Kamakshi Khanna has steered three Ted X talks even if she has a long way to go. Ask about her dreams, and she smiles, “My dream is not to be in Bollywood as I won’t be doing anything that I can call mine and that’s why you don’t see me hustling in Mumbai. I want to reinvent myself and make music that can define me. The moment people hear a song they should be able to say that it’s a Kamakshi Khanna song and not a song where they say that ‘arrey jisme Deepika Padukone hai’.”