The city is developing a secret music base, and organising gigs in unique locations. 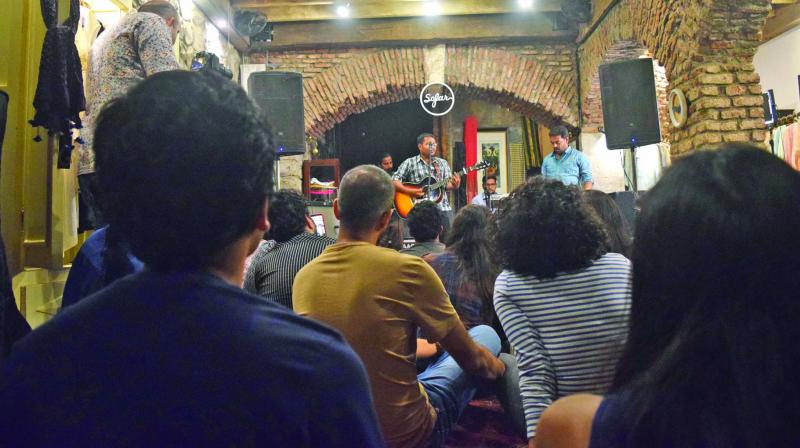 Like everything else, the venue is also a secret.

On a Sunday evening, Melange, a small boutique in the city hosted an intimate gig that had musician Deepak Peace, crack up the audience with his songs that included Meri maa ko tu pasand nahi and Munna the Tiger. Organised by Sofar Sounds, these monthly gigs are super secret. Interested audience members have to apply for a seat at least five days in advance and if they are lucky enough, an email will pop-up. But the exact venue is revealed only a day in advance.

The idea was conceptualised when the London-based co-founders had once gone to watch a band performance and were let down by the ambience. The audience was loud, the bar was noisy, phones were going off and they couldn’t even hear the band. So they took matter in their own hands. “The idea of secrecy comes from the level of respect we want for our artist. Because usually when more than one artists are booked for a show, there is a sort of a line up where the most experienced or the most famous artist plays last. And we wanted to turn it on its head,” says Arul Kacker, the city leader for Sofar Sounds, explaining why the line up is not revealed.

But how do music enthusiast get to know about an upcoming gig? According to Arul, the publicity for Sofar Sounds is mostly by word of mouth. “When you do a good show, even if there are fifty people in the room, they will tell their friends,” he says. The variety of artists they host are not easy to find, but thanks to the rise in their popularity over the years, they now receive request from artist themselves. Talking about the artist selection, Arul says, “We’ve been doing it long enough that a lot of artist apply to perform. But at the same time, we also have our eyes and ears open, listening out for what new, and what’s fresh and good.” He also has a pretty stringent review team. “There is five of us that reviews every single band that applies and only if all of us agree, then only we have them perform,” he adds.

Like everything else, the venue is also a secret. And to keep the gigs intimate, Arul looks for small spaces with character. “Initially when Sofar started worldwide, it started in people’s living rooms. And that’s what we tried to do most often as well,’ says Arul. But finding a living room big enough for 50 plus people is quite a challenge. “We’ve organised gigs in art galleries, at Ministry of New which is a co-working space and in living rooms as well in Pali Hill, Pedder road, in terraces and in gardens as well,” Arul adds.

Talking about the music scenario in the city, Arul says, “One of the primary concern in a place like Bombay is that you get saturated by what you see, because to see live music, there are only a couple of places. So you go to the same places again and again and chances are you’ll even see the same performance twice. So we offer them a great quality intimate show and every single time, there’s a new venue and a different artist. And people enjoy that and that’s why the demand is so high now.”