Entertainment   Music  24 Oct 2018  When pining will have no song...
Entertainment, Music

When pining will have no song...

Pining touches a new depth of poignancy as the viraha songs are sung especially in monsoon in Rajasthan, eastern Uttar Pradesh and Bihar. 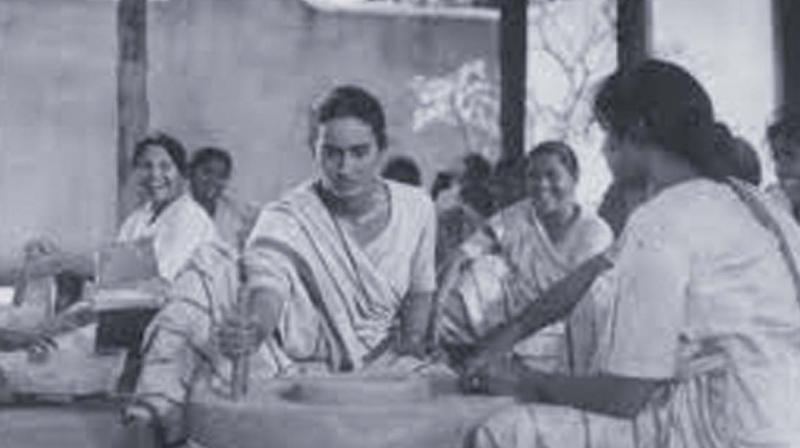 Stills from the film Bandini

Sitting in close proximity with two young pretty girls as they send heart-shaped icons to the love of their current life on their mobile phones left me feeling rather amused for two reasons. For one, they were able to express so openly and warmly and two the whole idea of pining or not pining as it were, took on a different meaning altogether.

It occurred to the romantic in me that the entire literature and music that surrounds pining or viraha songs of the women who await the arrival of their beloved will be a thing of the past when “milan” or meeting physical or metaphoric is just a phone call away. And so its expression. Where is the need to pine if all you need to do is to make a phone call? No chithi or letter has to be awaited either!

It left me feeling a trifle wistful. I was reminded of the two hauntingly poignant songs from the Bimal Roy’s classic film Bandini — O panchhi pyare… bole tu kaunsi boli… and Ab ke baras bhej bhaiya ko babul… when jail inmates in a women’s cell sing these songs of separation as they look out of the window and the lone tree visible from there which is their only connection with the changing seasons and the imagined world outside…

Pining touches a new depth of poignancy as the viraha songs are sung especially in monsoon in Rajasthan, eastern Uttar Pradesh and Bihar. We follow the monsoon trail like an obsessed love-lorn lover seeks his beloved! Like the proverbial papiha bird waits for rain, the Indian is genetically programmed and culturally conditioned to sing and dance with joy — even if metaphorically.

Like so many stylised versions of Indian classical pieces like the ghungat ki gat or panghat ki gat that Pandit Birju Maharaj says are difficult for today’s dancers to relate to since there is no connect, same thing with the genre of viraha music — it will slowly die out like many forms. For just a while longer the romantic in me want to hang on for a bit to the pining, the refinement of thought, the love-lorn craziness, the depth of the love that flows in tears and purifies its very being... spare me the heart with arrow carvings on the trees and old monuments please.

My pet theory about the shared heritage of the arts is that there are no boundaries as to what affects and impacts the sum total like the proverbial mix of water and milk that is impossible to separate. But since it will soon be on the wane, it would be so important to record this music for posterity and at least share with later day listeners that such a genre existed and had a socio-cultural reason to survive. I for one have derived so much joy from such old compositions that I can’t help but feel grateful that one was born in times when these compositions actually abounded.

Since most of us visual artists listen to music while painting, one is always on the lookout for music that sends us into raptures. One of my absolute all-time favourite recording that DD Bharti sometimes telecasts continues to be this Kohinoor of dance and music — Pandit Birju Maharaj playing the tabla and singing thumri, with Pandit Durga Lal playing the pakhawaj and Pandit Gopi Krishan dancing Kathak. All the doyens of Kathak performing together! It is truly a sight fit for the gods!

It has been a source of wonder and deep respect for the yeoman’s work that various government agencies have been doing to keep our artistic heritage alive — the Sangeet Natak Akademi, All India Radio and subsequently Doordarshan have some mindboggling, rare and gooseflesh inspiring recording of old masters that they broadcast and telecast once in a while. It is with great gratitude I have often acquired the CDs they market.

I have often enjoyed the luxury of the listening room of the Sangeet Natak Akademi and heard some rare recordings in peace and quiet. Thanks to technology, it is relatively easier to digitise and make excellent copies of old recordings and many of our rare recordings are now accessible. Many other organisations both government and quasi government have live recordings and it really would be such a good idea if they make them available. But of course provided they can get across the bureaucratic hurdle race! As a bureaucrat friend of mine says — since you don’t work for the government I can’t even tell why I can’t acquire a better jhadu or broom for my office! I can only sympathise with him.