Ricky’s act is cleverly crafted, with musicians of equal stature and talent; as such, this concert leaves a lasting impact on the viewer. 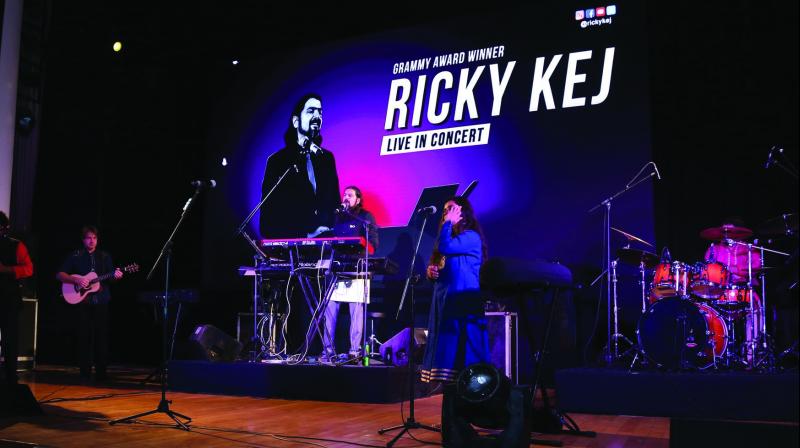 A recent concert of Ricky Kej in the national capital revealed how his act is unique; the combination of musical genres, the use of visuals as an essential component, the insistence upon lyrics with a message and the collaborative musical effort have become Ricky’s signature over the past years.

Grammy winner, UNESCO’s Mahatma Gandhi Institute of Education for Peace and Sustainable Development (MGIEP) Ambassador, Earthday Network Ambassador in India, United Nations “Global Humanitarian Artist”, “Youth Icon of India”, Kej is also a professor at the NIAS (National Institute of Advanced Studies) in Bengaluru. In his words, “After I won a Grammy in 2015 for my album, Winds of Samsara, I decided to only compose music with a message close to my heart.” What’s close to his heart is the world around him, the animals and plants that are threatened by humans, the effects of global warming. So that’s what he composes music about.

In his inaugural speech, environmentalist and politician Jairam Ramesh remarked, “We are lucky to have Ricky with his powerful message on our environment.” The concert started with a song by Grammy winner Lonnie Park from NY, who collaborates with Ricky frequently — in his words, “I keep coming back to India.” Called “New Beginnings”, the song, like all Ricky’s songs, had no pretensions of profundity; the essence of his music is its simplicity and directness. It was accompanied, as all of Ricky’s music is, with powerful visuals. The second song, on the Ganga, was even more poignant. Ricky reminded his audience that the water of the Ganga supports a tenth of the world’s population, sadly the cities along its banks have 7-15 times the accepted levels of pollution according to WHO guidelines. On this sobering thought, the song tugs at the heartstrings of every Indian who listens; the river winding its way down from its source, revered, the giver of life. Strong background instrumentals and dominant percussion is a essential component of all Ricky’s music, the Sanskrit lyrics reminding one of one’s identity.

The third song, “Vishwa”, was about the sinking islands of Kiribati; by the turn of the century they will be covered by the sea, as the effects of global warming are irreversible. Ricky spoke of the president of the island, Anote Tong appealing to the 193 heads of state at the Paris climate meet, who were powerless to change the course of nature, but who could certainly frame policy to stop further damage.

Animal-human conflict, which only a country like India, and maybe, the continents of Africa and Australia face, as only we still have large animals upon whose preserves we humans are encroaching, was the theme of the next song, “Kudrat”. The lyrics in Sanskrit, sung by the talented flautist vocalist Varijaishree Venugopal, lauded our elephants, the visuals showed heartrending scenes of animals being forcibly relocated.

The next piece, called “Divine Festival”, was sung by Lonnie Park, but did not perhaps strike as strong a chord. “One with Earth” focused on sustainable farming with clips of farmers singing, too; however the song seemed contrived. The music of “Where are my Rainbows”, composed by Peter Yarrow and Lonnie Park, was nostalgic, went on to merge with the next song, “Let Us Breathe”. Next was an instrumental piece composed by violinist Manoj George which was raga-based, which merged into a solo percussion piece by drummer Arun Kumar who added an Indian touch by reciting percussive syllables (bols) – konnakol. The concluding “World Song” had the audience singing along, and clapping to the drumbeats, making the experience interactive.

Ricky’s new album, which can be downloaded free, was also released at the event entitled, Let Us Live, an album of soothing music for hospitals.

Ricky’s act is cleverly crafted, with musicians of equal stature and talent; as such, this concert leaves a lasting impact on the viewer.