Jumping from desi to hip-hop

Wasim and Sapna both of them looked stunning together in the music video. 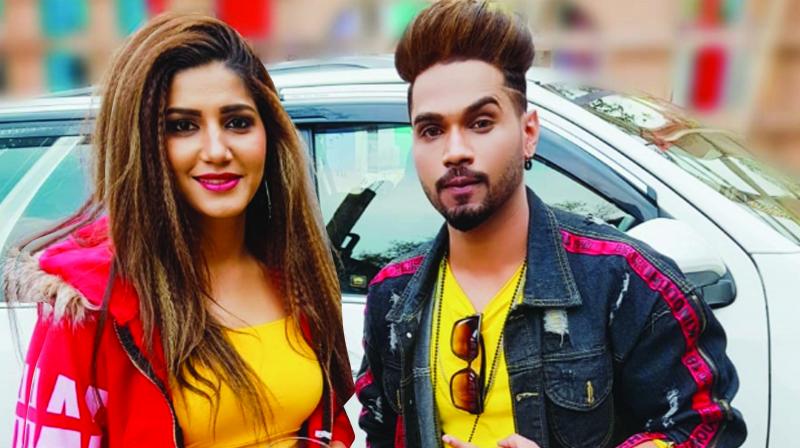 Sapna for the first time is seen in new bold avatar where she is flaunting Punjabi latke jhatke and giving some urban feel to the song whereas Wasim is just totally complementing her with his mooves.

After giving out a party song like woofer woofer that went on to become a smashing hit and accumulated immense love and support from the audience. Big Boss 10 fame Mehjabi Siddiqui’s brother Wasim Sheikh has recently came up with a song Nachke Dikha de featuring  Sapna Chaudhary under the T-Series banner. Immediately after the release the song went viral instantly on social media. Apart from singing the song, Wasim produced the song too, the song was directed by Kamaljot Singh, the lyrics were given by  Ravi Raj who wrote songs like 3 peg, Expert Jatt and many more.

Wasim and Sapna both of them looked stunning together in the music video. Sapna for the first time is seen in new bold avatar where she is flaunting Punjabi latke jhatke and giving some urban feel to the song whereas Wasim is just totally complementing her with his mooves.

Speaking about his experience, he says, “Experience was ultimate with Sapna Chaudhary because it was her first time doing something different from desi. So I was a bit anxious but after she gave her first shot, I gained some confidence. The expectations, which we had from her, she totally was outstanding. She had this swag  while shooting.” On the other hand Sapna shares, “It was such an amazing experience working with Wasim. He is very passionate about his work and I totally enjoyed every bit working with him. I was little scared because my fans have always seen me in suit and in desi avatar but for this song I was going for some different look, so yes it was a big challenge for me, but I am glad my fans actually liked it”.

Sharing one of his most favorite songs he says, “I am really confused between Woofer Woofer and Nachke Dikha De but if I analyze things, I would say nachke dikha de is my favorite. Because with nachke dikha de my experience is completely different and amazing, there are a lot of feelings connected to this song and I too have enjoyed a lot, every thing was just best with this song.” While Sapna adds, “Wasim Sheikh is really a great and versatile singer. He is just like an ocean of talent. He always tries to do something amazing, different and attractive and I would love to work with him again and again for sure.”

While conversing about their next projects Sapna says, “I am working on many projects though I can’t reveal anything right now as it will be out very soon and Inshallah you will love me in that also.”

Wasim excitedly adds, “We have some planning’s which I don’t want to reveal all now, as I like blasting things at the very last moment to the audience. All I can say is that I am working on it and soon be doing a rap song as well, as per my plans for my next video I want to take a known face which can be anyone, from TikTok to hip hop or from modeling industry. I am also doing a romantic song. in fact I am working on
different projects.” he adds.

I also got an offer for a Haryanvi song. I want to be versatile singer; I just don’t want to  sing the same genre. I think I am capable of singing Sufi songs as well, so there are many shades of me when it comes to singing.

I would like people to experience all,” the conversation was concluded.