Queen of thumri Girija Devi: A legend is no more

Her paan-stained teeth were visible every time she smiled while gliding through the notes. 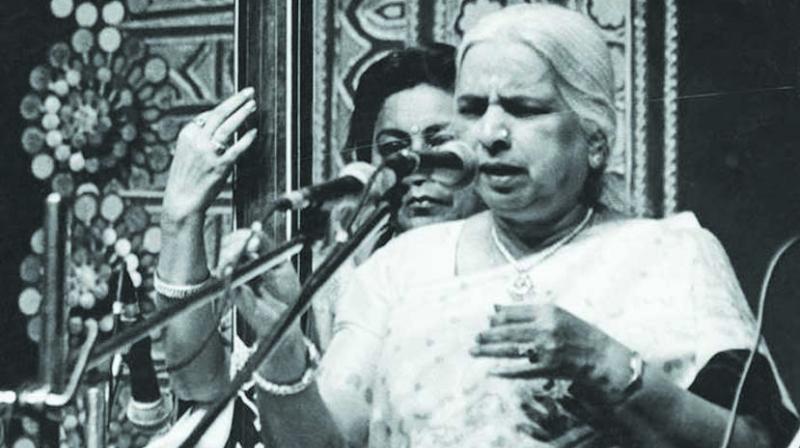 The white hair was deceptive and the voice rang as clear as a temple bell. In the range that traversed over the octaves with tremendous ease, there was a unique metallic quality in her voice, which didn’t jar but was endowed with the character.

Girija Devi, the Hindustani classical vocalist, spoke in a pronounced lyrical lilt accent of the Banaraswalas, with all the musicality and sweetness of the Eastern UP ‘purab ang’ firmly intact.

“After all, my memories and references are from there. It is my ‘janam sth-al’ as well as ‘tapo sthal.’ (I was born here, I learned my music here),” she said.

This sweetness is carried forward in her song too, incorporating the increasingly infrequently sung hori, kajri, chaiti and tappa, forms of light classical music, as an intrinsic part of her repertoire.

Her paan-stained teeth were visible every time she smiled while gliding through the notes.

The song conjured up a picture of the happy moments of spring. A beatific expression would often light up her countenance. The picture was complete. But as far as she was concerned, the picture was incomplete. “Unless you are able to move people to tears with the sheer beauty of your music, your music is incomplete,” she would say. “Even now I feel I should take a break from the rat race and do more ‘riyaz’ to achieve it.”

Even as she wished to improve her music, it was evident that it was her only occupation. “Even when I wanted to cry, I would dissolve my pain and tears in song. Music and life cannot be ‘betaal,’ or out of sync.” Girija Devi’s eyes flashed just like the big diamonds in her ears and nose.

“I do not want to sing and grab centre stage when I cannot sing the notes properly. But sometimes I feel it is all so pointless. It’s better to teach just a few students and pass on the baton. Till I have the strength, I can hone their skill to perfection. What is the point of teaching when you have no voice left and cannot even demonstrate correctly? The idea is to pass on the treasure while one can still show the way. If one can discover the old compositions and sing them, let alone create anew, it would be enough,” she had said in her inimitable practicality. She wanted to leave behind an impressive line up of shishyas.

“Maybe the pressure of work is too much, preventing them from totally immersing themselves in it. These days they need academic as well as musical qualifications. If something happens to their voice, at least they can do something and not starve. But I feel they should stay away from performing too soon. They may impress but it has become more like a flash in the pan,” she said. Her own treasure or ‘punji’ did not come to her from her genes.

“How many poets were there in Meera Bai’s family or for that matter how many heroines in Laxmi Bai’s family?” she asked. For her own part, Girija Devi, had to pick each note with great effort and years of practice. Not born into a family of musicians, the music bug bit her early and her farmer father made sure that his daughter receives good training from the likes of Pandit Sarju Prasad Mishra. “My gurus used to inculcate a sense of pride in excelling in ten ragas rather than running after a hundred. My elder sister used to sit for hours with me to help me with my riyaz.” Years later, her husband encouraged her to perform and sing.

“He was a well-off man and was against my accepting money for concerts... But I was adamant. I said even if I throw the money into the Ganga, I will not sing without payment. My logic was that it cuts into the payment and opportunity of other musicians if I sing for free. So he refused to accompany me on my concert tours.” This is not to say that music was her only interest. Her love for dolls was almost legendary, which is evident from her collection. She loves to cook and feed people. She learnt horse-riding, swimming, badminton, and cards to please her husband. But Appaji, a name given to her by her nephew, which stuck, didn’t indulge in all these things. “It is like wearing a bikini at this age!” she laughed.

For a classical singer, any other kind of music is usually anathema. Girija Devi was no different.  “Ghazal, qawwali, film music, disco and pop are all fine but like after eating spicy chaat for a few days, you long for plain dal-roti, so is it with classical music. Any music without a strong base can dazzle for a few days, but then it begins to pall. Any singing that is not versatile cannot sustain itself, or for that matter, audience interest,” she said.

That was a problem that she did not face. Her spellbinding thumris, did not distract this deeply religious singer from worshipping Shiva and doing the severe penance of the ‘panch mahadev parikrama’ every Monday. More importantly, her extended repertoire of other forms of light classical music tappas, kajri, hori and chaiti endeared her to newer audiences and firmly sustained the older ones.

It was Holi, the festival of colours, when I met her. She was deeply missing Banaras. The Uttar Pradesh tradition which was deeply rooted in her was evident when she candidly said, “Angrezi mein to na phool baraste hain, na paani chalakta hain baithe rahiya sukhe”.  (The flowers do not come down in cascades, neither does water out of pitchers with the same lyricism. The inadequacies, may I add, are all mine.)