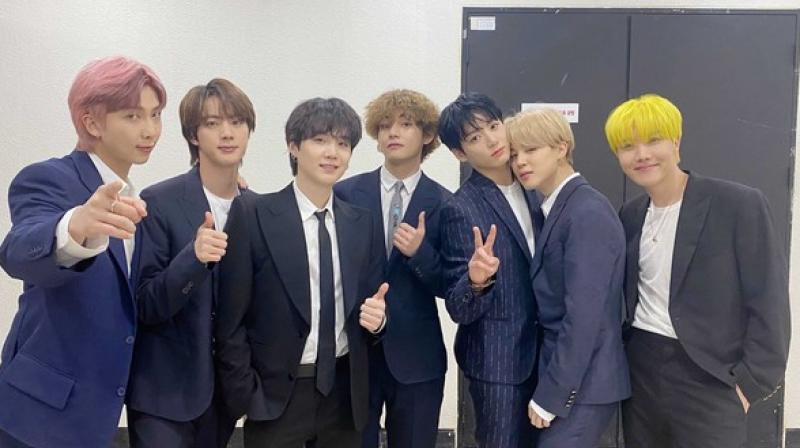 The group, which comprises of Jung Kook, V, Jimin, j-hope, SUGA, Jin and RM, took viewers along to a backstage dressing room and onto a red carpet fitted for the BBMAs. (Twitter)

Washington: Popular South Korean boys' band BTS, who recently dropped another smash single -- 'Butter' -- has announced that an online live-streaming event 'BTS 2021 Muster Sowoozoo' will take place in celebration of the eighth anniversary of BTS and its 'army' of fans.

As per Variety, the two-day event will take place on June 13 and June 14 - WORLD TOUR VERSION (with some of the act's foreign language songs).

More information regarding the tickets will be announced on a later date, as per the announcement.

BTS graced the Billboard Music Awards with a performance of 'Butter.' Broadcasting live. It performed remotely from Korea. The group, which comprises of Jung Kook, V, Jimin, j-hope, SUGA, Jin and RM, took viewers along to a backstage dressing room and onto a red carpet fitted for the BBMAs.

Variety further said that 'Butter,' already primed to be an upcoming summer hit, is the K-pop group's second English single, right behind last year's super hit, 'Dynamite.' It broke multiple records within the first couple hours of its release. Breaking their own record, 'Butter' became the fastest YouTube video ever to reach 10 million views, hitting the mark in just 13 minutes. Within two hours, the song hit No. 1 on Apple Music.

A day in, 'Butter' logged the most single-day streams of any song ever on Spotify, with 20.9 million global streams on the first day. The music video also broke their own record and set a new all-time 24-hour record of 108.2 million views. It also marks the biggest music video Premiere on YouTube, racking up 3.9 million peak concurrents.

The pop group will appear on 'The Late Show with Stephen Colbert' on May 25 and the 'Good Morning America' 2021 Summer Concert Series on May 28, Variety reported.