Come and see, music and poetry

Though from very different backgrounds, the artistes have successfully merged their forms with little difficulty. 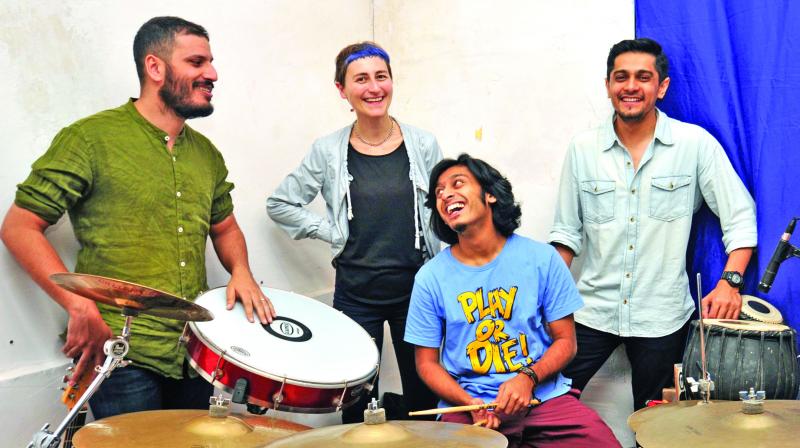 Members of the band and Ulrike (second from left) share a light moment during rehearsal. (Photo: Debashish Dey)

German poet Ulrike Almut Sandig sits on a chair, mic in hand, eyes half-closed, as she performs her poetry pieces. The sound of her voice is lilting, not so much singsong as melodic. After a couple of lines, Muhammed Muneem’s voice crooning yaman alaap joins in, creating a beautiful mesh of poetry and melody. It is fusion that the Sufi rock band Alif and Ulrike are trying to achieve for their collaborative concert which is taking place this evening at Edward Theatre.

Alif, which is a Pune-based Sufi Rock band, and Ulrike find common ground in their verses, which speak of dissent. “After World War II, Germans poets claimed that there was no more poetry to write. It was much later, during the 60s, with Woodstock and a politically charged atmosphere that poetry of resistance took centre stage once again. My poetry, however, is different from the poetry of those times, in that it appeals to the audience as equals, rather than advising them as superiors as earlier works did,” explains Ulrike, whose background in Hindi, which she studied in college, helped her in better understanding the Urdu, Hindi and Kashmiri poetry of Alif.

The Alif members, on the other hand, minutely went through the Ulrike’s translated poetry, so as to better understand the themes. “We went through her poetry and realised that the kind of poetry that she has written is similar to what we want to convey with our music,” says Hardik Vaghela, who plays the keyboard. He adds, “In many of our poems, we have fused our themes for many of the songs.”

One such song, Khair, says Muhammed, is about a convict on a death row, who says that he would still commit mass murder, if he got the chance. He says, “We have taken this theme and added a song which Ulrike’s daughter sang.” Ulrike elaborates, “It was a very common song which used to be sung during World War II about a father who died in war.”

It is not just in terms of the themes that the musicians and poet have fused, but the very sound of words. Ulrike says, “One cannot exist without the other. Just as the theme is important, it is the sound of the words that bring the poetry to life,” says the poet. One piece, for instance, has the poet simply reciting to the sound of drums played by drummer Karan Chitra Deshmukh. “I go by the feel of her words and the emotion behind her voice when I play. When she exclaims in a louder voice, I use more drumming elements, while when she is softer, my playing, too, follows suit,” explains Karan.

Though from very different backgrounds, the artistes have successfully merged their forms with little difficulty. This is perhaps because, Alif gives a lot of importance to the lyrics of their songs, while Ulrike emphasises on the onomatopoeic melody created by words.

“Many of Alif’s songs are first poems, which are only later put to tune. When we first started speaking with Ulrike over Skype a couple of months ago, we realised that, despite different backgrounds and even different genres, we essentially look at poetry and music very similarly. We clicked right away and hopefully that will show at the concert tomorrow,” says Muhammed.