Lin-Manuel Miranda is Associated Press entertainer of the year 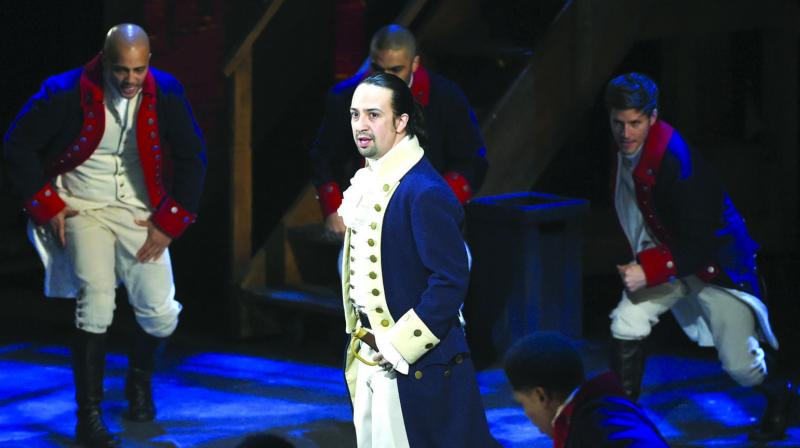 A file photo of Lin-Manuel Miranda and the cast of Hamilton performing at the Tony Awards at the Beacon Theatre in New York. (Photo: AP)

Winning a Pulitzer Prize and a clutch of Tony Awards in a single year would be enough for anyone. Not Lin-Manuel Miranda. Not in 2016. The Hamilton writer-composer picked up those honors and also earned a Golden Globe nomination, won the Edward M. Kennedy Prize for Drama Inspired by American History, wrote music for a top movie, and inspired a best-selling book, a best-selling album of Hamilton covers and a popular PBS documentary.

A new honour came Wednesday when Miranda bested Beyonce, Adele and Dwayne “The Rock” Johnson, among others, to be named the Associated Press Entertainer of the Year, voted by members of the news cooperative and AP entertainment reporters.

“There’s been more than a little good luck in the year itself and the way it’s unfolded,” Miranda said after being told of the honour. “I continue to try to work on the things I’ve always wanted to work on and try to say yes to the opportunities that I’d kick myself forever if I didn’t jump at them.”

Miranda joins the list of previous AP Entertainer of the Year winners who in recent years have included Adele, Taylor Swift, Jennifer Lawrence, Lady Gaga, Tina Fey and Betty White. The animated Disney juggernaut Frozen captured the prize in 2014, and Star Wars won last year. (By the way, Miranda wrote one of the songs in The Force Awakens.)

When he hosted “Saturday Night Live” in October, he somewhat tongue-in-cheek acknowledged the rarity of having a theater composer as host, saying: “Most of you watching at home have no idea who I am.” They surely must by now.

Miranda was virtually everywhere in popular culture this year — stage, film, TV, music and politics, while engaging on social media as he went. Like a lyric he wrote for Alexander Hamilton, it seemed at times that the non-stop Miranda was working as if he was “running out of time.”

Julio D. Diaz, of the Pensacola News Journal, said Miranda “made the whole world sing, dance and think. Coupled with using his prestige to become involved in important sociopolitical issues, there was no greater or more important presence in entertainment in 2016.”

Among the things Miranda did this year are asking Congress to help dig Puerto Rico out of its debt crisis, getting an honorary doctorate from the University of Pennsylvania, performing at a fundraiser for Hillary Clinton on Broadway, lobbying to stop gun violence in America and teaming up with Jennifer Lopez on the benefit single Love Make the World Go Round.

He started the year onstage in the Broadway hit Hamilton (which in 2015 had won a Grammy and earned Miranda a MacArthur genius grant) and ended it with a Golden Globe nomination for writing the song How Far I’ll Go from Moana, which was on top of the box office for three weeks this month, earning $165 million.

“I’ve been jumping from thing to thing and what’s been thrilling is to see the projects that happen very quickly kind of exploding side-by-side with the projects I’ve been working on for years,” Miranda said.

Though theater fans have long cherished his fluency in both Stephen Sondheim and Tupac, Hamilton helped Miranda break into the mainstream in 2016. The groundbreaking, biographical hip-hop show tells the true story of an orphan immigrant from the Caribbean who rises to the highest ranks of American society, told by a young African-American and Latino cast. The cast went to the White House in March to perform songs from the show for the first family and answer questions from school children. A version of the show opened in Chicago in October and a production is slated to land in California next year and in London soon.

The show’s effects were felt across the nation this year, cheered by politicians, stars and rappers alike and even helping shape the debate over the nation’s currency.