Sufi music is all about immersing yourself in Allah to the extent of losing yourself; where the master and the man becomes one. 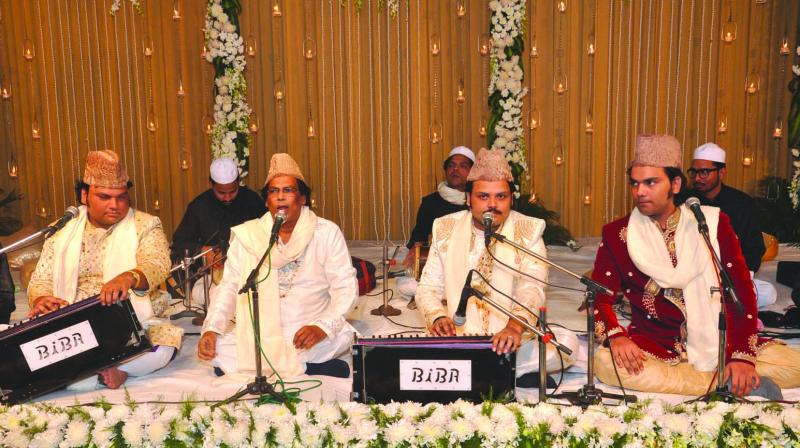 Songs sung by Sultan Niazi and Usman Niazi were stirring in an event organised by businessman and philanthropist Sanjay Dalmia and celebrity astrologer Jai Madaan.

The above hadith — a saying of the Prophet Mohammad — is written by the great Sufi poet Amir Khusro. And when you hear such profound lyrics as a qawwali sung by the well-known Niazi Nizami brothers, the cold winter night turns warm.

The songs sung by Sultan Niazi and Usman Niazi were stirring in an event organised by businessman and philanthropist Sanjay Dalmia and celebrity astrologer Jai Madaan.

The singer duo enthralled the audience with their magical performance. Coming from a legacy of music legends, like Maestro Mehboob Ragi and their father Ustad Qadar Niazi, who himself has been a child prodigy, the Niazi Nizami brothers are among the foremost Qawwali singers of the country, frequently performing at Dargah Hazrat Nizamuddin Auliya, and have spread the magic of Sufi music across the globe.

For the Nizami brothers, the future of qawwali is bright. “People are now interested in listening to not just popular songs but also the poetry of our poets like Rumi, Baba Bulleshah, Hafiz, Omar Khayyam and Amir Khusro. Some of these qawwalis are 700 years old,” says Sultan saab.

While the listeners were spellbound, the singers too were lost in a trance while singing Aaj rung hai, Ae ri sakhi Khwaja ghar aaye and Dama dam mast kalandar.

Sufi music is all about immersing yourself in Allah to the extent of losing yourself; where the master and the man becomes one. “The qawwali has two purposes. One is ‘ishq haqiqi’, which is to be one with Allah, and the other is ‘ishq mizazi’, which is more to please oneself or to entertain others. Songs like Aaaj Rung Hai constitute the former while Unke paon mein mehendi lagi hai falls in the latter category,” says Usman, his eyes gleaming with pride with the knowledge that he learnt from his forefathers.

The most difficult thing about such Sufi nights is that they get trapped in the straitjacket of how movies portray qawwalis. While movies are purely for entertainment and to draw crowds to theatres, qawwali is “sung for the sole purpose of spreading love, peace and brotherhood”. Sultan saab explains, “Qawwali is my way of connecting with Allah… you don’t give food to a Sufi saint but for him singing praise of Allah is crucial for his life.”

Jai Madaan said: “It was a beautiful evening graced by the famous Niazi Nizami brothers, who gave a power-packed performance and took the listeners on a beautiful journey of soulful Sufi music. I am very glad that our guests got to experience great music and had a wonderful evening.”

The Niazi Nizami brothers brought us one step closer to God.