‘There’s something really cathartic about singing’

His principle in life is simple; he likes to keep busy at all times and gets anxious if he’s not “creating something from nothing”. 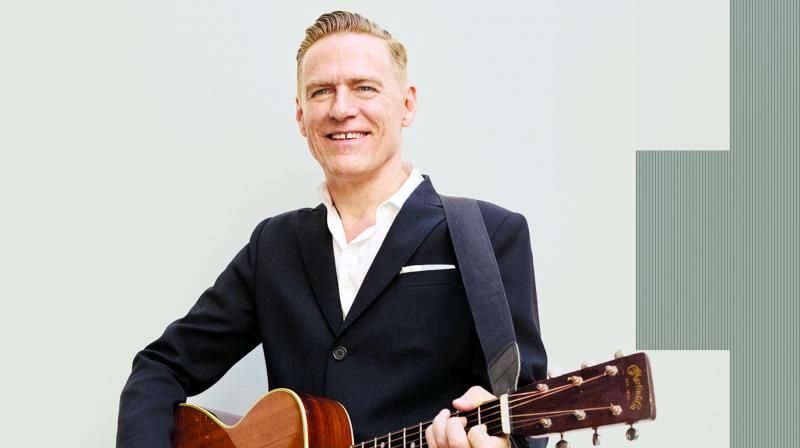 “The fridge was empty at home, so I had to go to work,” says the Canadian soft-rock sensation Bryan Adams, who much to one’s disbelief started his cutting-edge career in music only when push came to shove. This is perhaps one of the most fortunately unfortunate occurrences in Bryan’s life, whose seminal 40-plus year career in music has placed him at the top of the world’s most steadfast and successful artists of all time —  selling anywhere between 65 to 100 million copies worldwide. For his nineteenth concert tour, the singer will be jaunting the Indian sub-continent on a six-day trip starting from October 9 and covering the cities of Ahmedabad, Hyderabad, Mumbai, Bangalore and New Delhi.

The gigs are a condensed compilation of Bryan Adams’ extensive back catalogue – 13 studio albums, five live albums, five compilation albums and over 75 singles – into a 21-track package titled, Ultimate, which released in November last year. Some of the all-time favourites included are Summer of ’69, Heaven, Cloud Number Nine, Everything I Do I Do It For You and 18 till I die among others.

This tour will be his fifth tour to the country, and he proclaims, “It has always been a great adventure in India.” His never-dwindling fan-following keeps the artist coming back for more, making him one of the few artists from the west to revisit India five times. The singer reminisces his first visit to the sub-continent, “where the light switches were large levers beside the stage,” he laughs. In a typical firangi-account of India, he says, “On my first trip to India, there were no cars to collect us, so Keith my guitarist and I got in a taxi from the airport. The suspension was broken in the car so we leaned over the seat to watch where we were going. Along the way, we had to stop because an elephant had gone to sleep in the middle of the road.” He shares, quickly adding, “That story would not happen anywhere else in the world, welcome to India.”

Bryan and Keith have traversed many worlds together and have been partners right from the 70s. Another name that has been associated with Bryan for years is that of, Jim Vallance, who has been Bryan’s songwriting partner since 1978. The duo met by chance at a store in Vancouver, Jim was a drummer and songwriter in a rock band called Prism. “I have to give credit to Jim Vallance for initially inspiring me to write better songs,” says Bryan.

At age 15, Bryan embarked on his journey as a background vocalist for the Canadian Broadcasting Corporation (CBC) and then with Motown keyboardist Robbie King, who gave him his first salary as a musician. At 16, he quit school to pursue a career in music and even convinced his mother to let him buy a piano set with the money she had set aside for his school. In hindsight, his reckless decisions turned out to be rather prophetic. Ironically, it was his 1984 album ‘Reckless’ that catapulted him into global fame and the 58-year-old singer is humbled by his remarkable journey. “It was strange but fun to be working the bars and clubs from 15, and I worked for years without a paycheque, totally ripped off. But once I was able to pay my rent, I was even more grateful for the times I’d had struggling,” he recalls.

The rock maverick is also a celebrated photographer and some of his most famous portraits are those of Queen Elizabeth during her golden jubilee in 2002, Amy Wine House’s posthumous photo series, Mick Jagger, Michael Jackson, David Beckham, and so on. But, among these star-studded pictures, the piece de résistance of his photography career is certainly, the war photographs of veterans from Afghanistan and Iraq. And Bryan agrees saying, his book: Wounded — The Legacy of War, was the most memorable. “I photographed around 30 severely wounded veterans from the British Armed Forces that had returned from Iraq and Afghanistan for my book and exhibition at Somerset House, London. It was a humbling experience for me” says the legendary singer.

Bryan entered the world of photography, by simply “Experimenting and documenting work on the road and ultimately doing portraits of friends.” But he started taking photography seriously only at the end of the 90’s; “In the late 80’s I bought a Rolleiflex camera which sort of changed everything about photos for me,” he reveals.

For the uninitiated, Bryan has shot ad campaigns for prestigious brands such as Hugo Boss, Guess Jeans, Sand, Converse, Montblanc, John Richmond, Fred Perry, Escada and so on. His work has also been featured in magazines such as Esquire, British Vogue, Vanity Fair and British GQ. The rock star is also deeply vested in philanthropic activities and runs The Bryan Adams Foundation, which provides a platform for education and learning to children and youth worldwide.

His principle in life is simple; he likes to keep busy at all times and gets anxious if he’s not “creating something from nothing”. But he’s happiest when “he’s singing”, he asserts, “There’s something really cathartic about singing. I don’t consider what I do work really, only because it’s too satisfying for me.”