But the real eye-opener was the six-CD deluxe set that is housed in a box with lenticular artwork of the original cover. 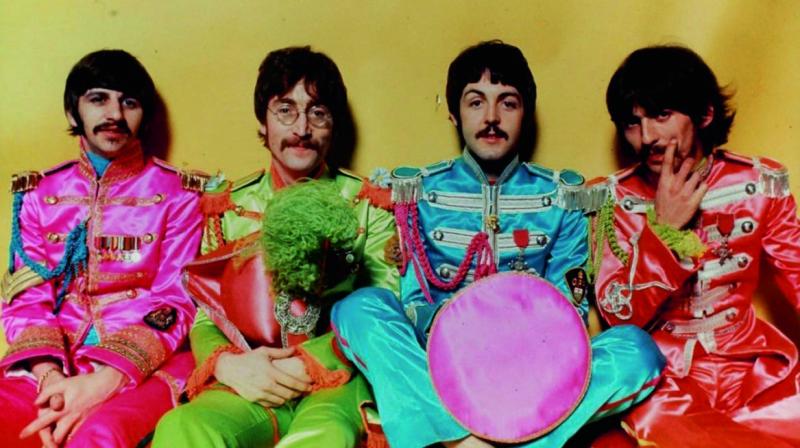 The Beatles in their Sergeant Pepper regalia

It has taken me years to build my CD collection, which commenced in 1989 when I purchased my first CD player, all for a princely sum of Rs 7,500! It became difficult to buy CDs henceforth as they were just not available in India and, in turn, I purchased valuable US dollars and provided them to any well-wisher travelling abroad, who was willing to purchase CDs of my choice.

When my brother and I were in Germany in 1992, we went berserk shopping for CDs, purchasing over 50 CDs during that memorable visit to Berlin. One of the rare finds was the Beatles’ “Rockin’ At The Star Club, 1962”, a recording of their final Hamburg gig on December 31 that year. Within months of our returning home, I read a news item on May 10, 1992 to be precise (as I have held onto the clipping!) — that spoke about the Beatles and its record label then, EMI, having obtained a permanent injunction preventing any further sale of “Rockin’ At The Star Club, 1962”.

Three years following my visit to Germany, I got the opportunity to join the Beatles’ record label in India, EMI, which was exclusively licensed to The Gramophone Company of India (now Saregama). By the time I exited in 1997 (to directly work with licensor EMI), I had purchased all the Beatles albums on CD, which retailed at Rs 550, including “Sgt. Pepper’s Lonely Hearts Club Band”. On May 26 this year, the album was reissued by Universal Music (a large part of EMI had since merged with them) to commemorate 50 years since the release in 1967.

Fans now have an opportunity of selecting from four separate offerings, including a newly remixed single disc of the original album, a two-LP vinyl set with the album and a second disc of outtakes in the same order as the album, and a two-disc CD version with a second disc of early takes from the album in the same sequence plus outtakes of Penny Lane and Strawberry Fields Forever.

But the real eye-opener was the six-CD deluxe set that is housed in a box with lenticular artwork of the original cover. This included the original album, two discs of outtakes in chronological order of their first recording date, and a CD of the original mono mixes of the album with the Penny Lane and Strawberry Fields Forever singles, and unreleased early mono mixes of She’s Leaving Home, A Day in the Life and Lucy in the Sky With Diamonds. It is supported with a DVD and Blu-ray discs with 5.1 audio and high resolution mixes of the album and the Penny Lane and Strawberry Fields Forever singles, a newly restored version of the 1994 TV special The Making of Sgt. Pepper, and promotional films for A Day in the Life, Strawberry Fields Forever and Penny Lane. Also included is a 144-page hardcover book that speaks about the album, song-by-song.

Just as many ideas are sparked by chance, Sgt. Pepper first sprang from a conversation between Paul McCartney and the Beatles road manager Mal Evans while flying back home from a holiday in Kenya, when Evans’ request to pass salt and pepper packets, provided as part of the meal service, and was misheard by McCartney as “Sgt. Pepper”.

While McCartney expanded his imagination to mentally form an Edwardian-era military band, Evans aided McCartney with the song as they worked on the tune on a multi-coloured piano at McCartney’s home.

Although McCartney informed Evans that he would be duly credited for his efforts, McCartney and Lennon were quickly in a state of denial, convincing Evans that a “Lennon-McCartney-Evans” songwriter credit did not quite gel and, as history has it, Evans’ “contribution” was not officially recognised and was appropriately considered out of tune!

As we watch the re-release of “Sgt. Pepper’s Lonely Hearts Club Band” storm to the top of global charts yet again, original producer George Martin’s words ring truer than ever:

“The adulation that the album [received] now demonstrates that we are still only just beginning to understand the enormity of the Beatles’ achievement and its lasting impact upon world’s culture.”

Parag Kamani has been part of the media and entertainment business for over 23 years. He continues to pursue his hobby and earns an income out of it.