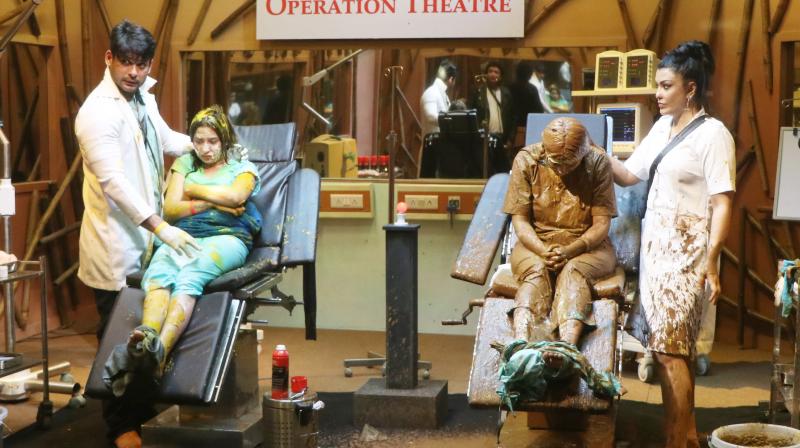 Mumbai: For the season’s first-ever luxury budget task, Bigg Boss turned the house into a hospital and what followed, created an uproar inside the house. While new relationships are beginning to take shape, there are also old ones being rekindled. The first day of luxury budget task saw Shefali, Dalijiet, Shehnaaz, Paras, and team carry forward the proceedings of the hospital task and play the roles of the doctor. On Day 2, it was time for the patients to undergo role reversal and continue the task.

The wake-up song Loveria Hua is a clear indication that the contestants must pull up their socks and up their game for the task. Early in the morning, Siddharth Shukla and Rashami Desai unleash their mischievous side and provoke Asim to help Shefali in her work out. Asim readily agrees and advises her to work on her posture, thus striking a conversation.

In no time, Bigg Boss makes the announcement of the task and the roles of doctors and patients are swapped. The contestants begin discussing their strategies to win the game and also promise to obey the instructions given by Bigg Boss, unlike the previous day. A topic springs up when Siddharth Shukla and Koena express their disappointment in Asim for not performing the previous day and giving up without trying.

The first buzzer rings and Arti and Asim are chosen to treat Shefali and Paras for a hearing disorder. While the doctors put in best efforts to score some points, they give up after hurling taunts and accusations at Shefali and Paras. The second buzzer rings when Siddharth Shukla and Koena are selected to treat Shehnaaz and Mahira for a skin disease.

The task takes an unpleasant turn as Mahira faces discomfort after the application of bleach on her face.  At the end of the task, a major fight breaks out between Shefali and Siddharth Shukla and they end up name-calling and mudslinging each other. Arti and Koena try to control the situation and ask Sidharth to back off.

Shefali’s fight with the contestants simmers further and gets uglier as Bigg Boss asks the contestants to unanimously elect the queen of the house. Everyone else agrees on one name but Shefali refuses to budge and nominates herself for the title.