Entertainment   TV  13 May 2020  American TV series Never Have I Ever strikes a chord with Indian students
Entertainment, TV

The series, starring Maitreyi Ramakrishnan, is about an Indian-American high school student struggling to cope with peer pressure 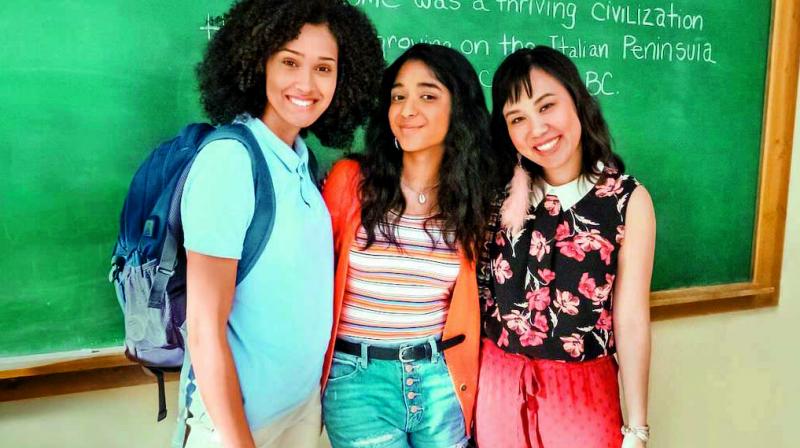 School years, we’re told, are the best years of life. But that’s open to debate. Particularly in today’s world. Never have I ever, an American TV series which premiered on Netflix, is finding echoes with high school children right here in India.

The series, starring Maitreyi Ramakrishnan, is about an Indian-American high school student struggling to cope with peer pressure as well as far-reaching changes in her personal life. Never Have I ever deals with a raft of issues, such as being cool, attention seeking, self-doubt, academic pressures, and problems relating to social status.

The American Psychological Association says school is the biggest source of stress for children.

Beulah Trishitha, who is studying in Standard X, says “This show accurately portrays what we go through. Teenagers have to manage friends and family. Having friends gives us joy, but having a gang of friends is also about being ‘cool’ and getting recognised by others.” She feels the pressures she’s exposed to during school life will help her handle stress later on. Having a supportive family is a great help, she says, but adds that, on the personal front, the fact that her father has recently been transferred is worrying her, not only because he’s not physically present during this milestone year, but also because he’s away from the family during the pandemic. Such worries are sure to affect the academic performance of students, and also bring about behavioural changes, she stresses.

Gracy Mrudhubashini, who is an Intermediate student, says “This series interests teens because it portrays the kind of things we have to deal with in our life.” The games, the happenings at school in Never have I ever, the importance given to belonging to a ‘gang’, the leadership issues, all strike a bell with her. “It is not easy to deal with teenager issues, and it’s often not easy to discuss these problems at home too,” she adds. “Teenage wasn’t very easy,” remembers Geetha Giri, looking back. She feels the problems and issues projected in the web series are similar to the ones that Indian college students face too. Though she herself didn’t have to deal with issues such as alcohol, the situations and emotions relating to school life, family and friends which the series reflects, are all familiar to her.

Vanitha Kumar an Intermediate student, is also able to relate to many situations in the series. “Not just the academic issues, but also issues relating to friends, the status issue, and aspects like boyfriends too.” Peer pressure and emotions have a direct influence on academics, she says, and explains that the trauma of failing to grab attention will lead to anxiety attacks. “The teenager’s mistakes are perfectly portrayed” in Never have I ever, she feels.

Harpreet Kandhari, a psychologist who handles teens, says young people are dealing with various fears — like the fear of the unknown, fear of change, of rejection, of disapproval, and more. “Frustration, fear, worries, anxiety, all influence the way teenagers behave”, she says. Teens today have to face a lot of comparisons, and they are not accepted by their peers if they aren’t ‘cool’, if they are not allowed to go to parties, if they aren’t habituated to drinking. Doing drugs is the trend, and many teens are using anti-depressant pills without their parents’ knowledge,” she says, sharing her insights. Many are in need of counselling.

As Never have I ever reveals, being a teen is no cakewalk anywhere in today’s world!

Tags: never have i ever, netflix special