Entertainment   TV  16 May 2019  Disappointed with latest episodes of GoT S8? So is the cast; Read
Entertainment, TV

Disappointed with latest episodes of GoT S8? So is the cast; Read

The latest episode of GoT, 'The Bells', is the worst-reviewed on Rotten Tomatoes. 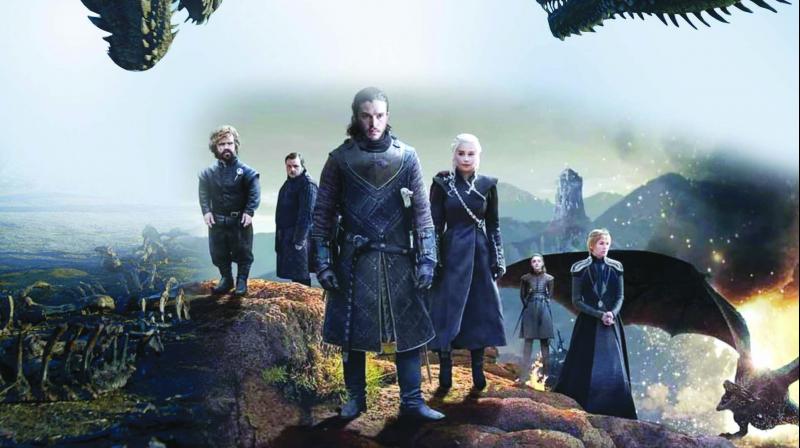 The cast speaks about its dismay as the show is headed for an end. (Photo: File)

Mumbai: Many speculations are being made since the beginning of season 8, the latest season of one of the most viewed shows with highest ratings. Game Of Thrones, written by David Benioff and D.B. Weiss recently aired what is being called the 'worst episode of the season'.

Although the show is famously known for its infamous deaths, the writers somehow haven't been able to win the fans' hearts this time. So much so that over 2 lakh 'Game of Thrones' fans have signed a petition to remake the final season with 'competent makers', according to PTI.

The latest episode,'The Bells', is the worst-reviewed on Rotten Tomatoes, with a score of 75 per cent.

Credit to Hindustan Times and Entertainment Weekly, we have insights from the cast members who have been quite vocal about their dismay.

Conleth Hill, who played Lord Varys in the show had been a prominent character until the previous seasons. In the latest episode, he was sentenced to death, burnt alive by Daenarys' only surviving dragon child, Drogon.

However, he felt that his character was 'sidelined' in the current season.

"That’s been my feeling the last couple seasons, that my character became more peripheral, that they concentrated on others more. That’s fine. It’s the nature of a multi-character show. It was kind of frustrating. As a whole, it’s been overwhelmingly positive and brilliant, but I suppose the last couple seasons weren’t my favourite," a rather disappointed Hill told Entertainment Weekly.

He said it didn't feel right for such an enlightened and wise character to not have a hint about what's going to happen.

“If he was such an intelligent man and he had such resources, how come he didn’t know about things? That added to my dismay. It’s now being rectified with getting a great and noble ending. But that was frustrating for a couple seasons.”

One more 'nasty' character who died a rather inglorious death was Euron Greyjoy played by Pilou Asbaek. Speaking to the IndieWire, he expressed his disappointment, “I wish we could’ve seen -- not the seducing side, not the ‘I want to f--k the queen’ side — but something different. Maybe something [darker], more mysterious. It would have been fun to see that side because it’s closer to the books.”

One of the tearjerkers of this season was Jaime Lannister riding away leaving the Brienne of Tarth. Their romantic involvement involved an elaborate buildup of seasons and ended in a whiff. Gwendoline Christie who plays Brienne, expressed her dismay while speaking to EW. Christie said that she was so dismayed by the character turn that she needed to go for a walk.

“I know it’s just a character and I’m an actor who’s lucky to do her job. It’s so heartbreaking. But it’s life, isn’t it? Life is heartbreaking. I never assumed they would be together. I didn’t think that would happen. And now I can feel a million hearts breaking.”

The disappointment didn't here. Lena Headey who plays Cersei Lannister is an opportunist who wants to get to the top. Her character turns in the season for worse. When it came to her final scene, she told the EW that she had 'mixed reactions'.

“I kept saying, ‘She wouldn’t, she wouldn’t, that she would keep fighting,’ but (David and Dan) obviously know what they’re doing and were adamant Cersei would do what she had to do.”

Cersei's fans were highly disappointed on her getting an inglorious death and so was she (Headey). “I wanted her to have some big piece or fight with somebody,” she told the EW.

Nathalie Emmanuel who plays Missandei on the death of her character said, “The one thing I would say is I really had wished that I had more time or scenes this season maybe with Daenerys or even with Cersei, scenes where we get to see her being brilliant before she dies.”

The most extreme character turn was that of Emilia Clarke, who plays Daenerys Targaryen. Known as the breaker of chains and a righteous ruler who once used to say,  "I'm not going to stop the wheel. I'm going to break the wheel" with reference to ending slavery. In this season's episode she, however, goes around burning millions of innocent people in the show when the viewer realises that she has taken after her father Aerys Targaryen, 'The mad king'  to transform into 'The mad queen'

"The ending ‘f**cked me up," Clarke said in an interview with Vanity Fair. “Knowing that is going to be a lasting flavour in someone’s mouth of what Daenerys is...” she left the thought unfinished.

Kit Harington who plays Jon Snow and is known to be ignorant throughout the show called the season "disappointing."