After polluting lands, rivers, coasts and oceans in the real world, plastic has found its way to the fantasy land of Game of Thrones. 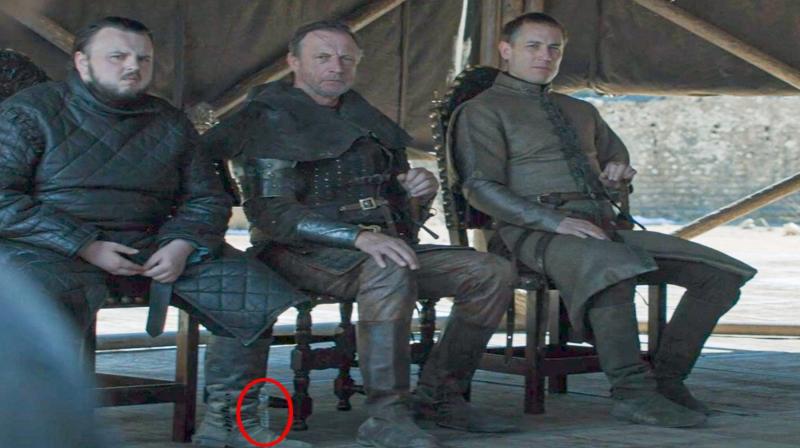 New Delhi: After polluting lands, rivers, coasts, beaches, and oceans, in the real world, plastic has found its way to the fantasy world of Game of Thrones.

Weeks after some hawk-eyed 'GoT' fans pointed out a forgotten coffee cup in one of the scenes of Episode 3 of the finale season, a couple of plastic water bottles were spotted in the concluding episode titled 'The Iron Throne' which aired this Sunday.

The bottle appears at roughly 46:19-minute mark the first time and then again a few minutes later, behind Samwell Tarly's foot. That's not all, another water bottle can be seen tucked behind Ser Davos' chair.

It isn't bottle of water it is lord of the vale "robin arryn" mother's Milk , but he forget it with Sam 😂😂#GameOfThronespic.twitter.com/Qqx0sOIpfz

These bottles feature in the very scene where a group of lords and ladies of the seven kingdoms are trying to take some significant decisions about the future of Westeros. And it makes sense that they wanted to keep themselves hydrated during the strenuous process.

Game of Thrones is the most scrutinized show on television, with dedicated fans who find these little mistakes in the episodes and voice their disapproval over them. The same happened to this.

Shortly after the episode was aired on HBO, eagle-eyed fans flooded the social media expressing their disappointment. "first a Starbucks cup now a water bottle? Cmon I was already disappointed y'all didn't have to make it worse," wrote a fan," a fan wrote.

"The water bottle for f*****g reals they shot/ edited this show with their eyes shut. One eye on the coin jar, the other on their foot out the door," another tweeted.

Calling the season Lazy, another user wrote, "The last season of game of thrones was lazy. All the way down to the Starbucks cup and water bottle being visibly. #GOT #GameofThronesFinale."

"Jon snow sent to the wall. Danerys becomes the bad guy. Varys gets killed for nothing. Cersei and Jamie get an easy death. The coffee cup and water bottle found in scenes. Season was an entire mockery of what they had built. That's what happens when you switch writers .. SMH," another user wrote.

After a remarkable 8-year-long journey, the makers of 'GoT' failed to impress the fans with the finale season which concluded on Sunday.

A couple of days back, disappointed 'GoT' fans started a petition on change.org, asking the makers to remake the eight season of the series "with competent writers". The petition has already hit 1.2 million signatures.

"David Benioff and D.B. Weiss have proven themselves to be woefully incompetent writers when they have no source material (i.e. the books) to fall back on. This series deserves a final season that makes sense," the petition reads.