How do I see who unfollowed me on Twitter

Stay connected with your followers, this way they know you care about them 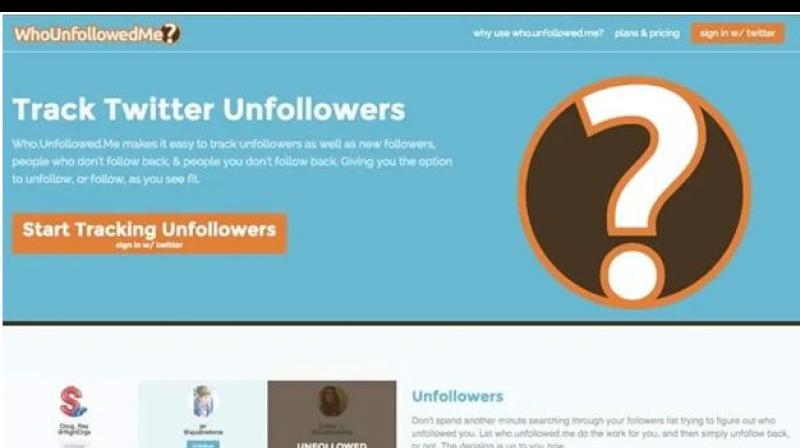 Twitter is a great way to connect with people, but it can be hard if everyone starts following you and then unfollows.— By arrangement

Twitter is a social media platform where people can share their thoughts and opinions with the world. It's also a great way to connect with friends and family, or even celebrities! But how do you know when someone unfollows you on Twitter?

Who unfollows you shouldn’t bother you. Yes, it can be a little disappointing to see people you were once close with no longer following your tweets on the social media platform, but it’s important not to take their unfollowing as an insult or personal attack.

In most cases, Twitter users who have stopped viewing your updates are simply too busy and haven't had time for all of their social networks lately-or they just lost interest in what you're tweeting about!

There are many ways to find out who unfollowed you on Twitter.

Here are 2 ways to know the answer to the question who unfollowed me on Twitter. eep reading!

WhoUnfollowedMe is a web app designed to show you how many followers you've lost or gained through the space of one week, month, year. From their easy-to-navigate dashboard, sign in with your Twitter info and get started tracking from there!

The dashboard from this site allows one to view new followers, those who have unfollowed them or followed back someone they had previously ignored--it does exactly what it promises! If for instance, you're looking for something simple and straightforward like checking up on your account every now and then without having to spend all day refreshing their feed online, using Who UnFollows Me may just be more convenient than ever before;

The Lite plan is great for those who want to keep it simple and don't need extra features. But if you're looking for more, we offer a pro version at $25/year or lifetime use of the service with our Pro subscription starting at only $119!

Unfollowestats is a free and easy to use app for the average Twitter user who wants to know when their follower count goes up, but also needs help figuring out why they're losing followers in droves or if there's someone trying sneakily following them without letting on that you've been followed back! It can be used for your mobile phone download via the apple app store.

If you want more than just the basics then they have some added benefits for as little as on $4.99 per month plan.

Check out the other 3 tools to see who unfollowed you

We have some more tools for you to check who unfollowed you on Twitter.

If that sounds like something worth looking into, these three web apps should help get down to the bottom of things: FollowerSearch (see what people say about following or not), CrowdFire (find those "I'm no longer interested" tweets), and CommunIT(check if any potential new followers have already disappeared).

How do I stop losing followers?

I was shocked when my follower count dropped by a hundred. I thought to myself, "How am I going to get them back?" Then it hit me that the number of followers you have is not what actually matters and if people are unfollowing your account then there must be something wrong with it so instead of focusing on why they left in the first place, try figuring out how you can stop more from leaving.

Millions of people join and quit social media every day, so it's only a matter of time before you lose followers. But what if they're leaving because your values don't align? That doesn't mean something is wrong with them or that you've done anything wrong; it just means evolution has occurred.

Don’t feel bad about it

If you really want a following, then focus less on the numbers and more on bringing something meaningful into Twitter with quality content so that people will actually pay attention. You'll not only be happier since it's what makes sense for all social media platforms but also grow in popularity thanks to those same decisions!

If we're honest, losing followers might feel bad right now when we are fixated by our number of "likes" or "favorites." But if this article has told us anything at all about being successful online: don't get caught up in the numbers because they won’t dictate how good your experience is overall--or even make

Engage with your followers

Stay connected with your followers, this way they know you care about them. If you don't want your following dropping, then show that they matter by making the effort and replying back when comments come in on Twitter posts of yours or conversing with people who follow you on other platforms like Facebook. Also, make sure not just post content once for it stop there - as soon as nobody cares what's coming from your account is pointless! You might be trying to get a few thousand more followers but at least maintain engagement levels so keep up those replies!

You're less likely to lose followers if you stay consistently engaged with them. Don't let these connections fizzle out reply anytime someone makes contact through posting a comment.

Twitter is a great way to connect with people, but it can be hard if everyone starts following you and then unfollows. If you want your followers to feel like they are part of the community and not just another follower in an endless line, make sure they know that their opinion matters by responding as often as possible when someone reaches out or follows back. One trick I use while on Twitter is sending welcoming messages for new members which really sets them apart from other organizations where no one ever talks.

Thank you for reading their article about who unfollowed me on Twitter? By now it should be clear that there are various ways to find out when someone has unfollowed you on Twitter- but hopefully, these tips have helped clarify some confusion! And remember, don't let those who no longer want to view your updates get under your skin too much.