Who Was Eugene Sandow?

His ability to turn his body into a career, fame and fortune, is something that many fitness influencers are attempting to emulate 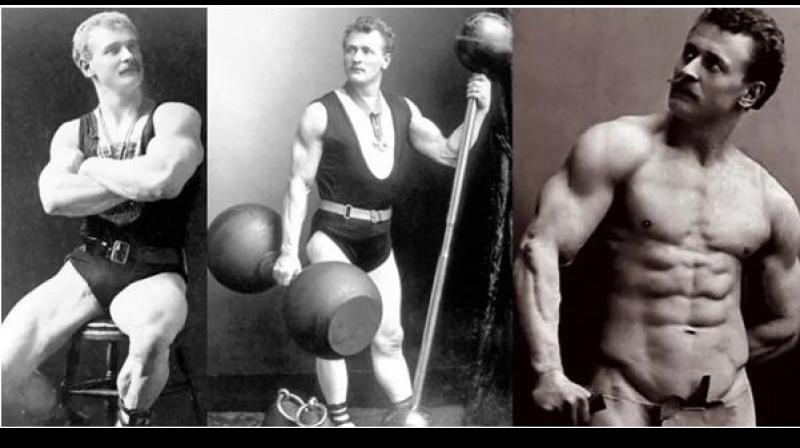 Sandow spent a couple of years travelling Europe as a circus strongman. Eventually he ended up in Brussels, where he first met Ludwig Durlacher. — By arrangement

In December 2020, during the middle of a global pandemic, Mamdouh “Big Ramy” Elssbiay held aloft the Sandow trophy as he was crowned Mr Olympia for the first time in his life. Few watching would have spent much time wondering why the title is called a Sandow, but for those who did, this article will focus on who Eugene Sandow was, and why his name graces bodybuilding’s most prestigious competition.

Who Was Eugene Sandow?

Although largely unheard of outside of the bodybuilding world today, Eugene Sandow was a fully fledged celebrity during his lifetime. He is seen by many as the father of bodybuilding and is also known for his influence on modern yoga.

He was one of the first truly global superstars. With fame following him from Prussia to Brussels, to London, to India and America. His influence on classical bodybuilding is undeniable, and it is his physique that adorns the trophies of Mr Olympia competitions to this day.

His ability to turn his body into a career, fame and fortune, is something that many fitness influencers are attempting to emulate to this day. Few have succeeded, and the ones who have owe a debt of gratitude for Sandow carving out a roadmap for them to follow.

Königsberg was a Prussian city that is now named Kaliningrad and is now part of Russia. In the small part of Russia that is nestled between Poland and Lithuania. At the time that Eugene Sandow was born, the city had a flourishing Jewish population.

Sandow’s family was of Jewish origin, with a German father and a Russian mother. However, both parents were Lutherans (a branch of Protestantism) when Sandow was growing up. He was born in 1867 and lived in Königsberg until his 18th birthday, when he left Prussia to avoid military conscription in 1885.

Considering the volatility of Europe at this time (the Franco-Prussian War was ongoing during Sandow’s birth) the decision to run away with the circus was actually a smart one. It’s certainly interesting that while Europe was slowly embracing nationalism, Eugene Sandow was becoming a true citizen of the world by embracing the circus lifestyle. He also picked up the nickname of ‘Sandow the lion tamer’, which you can read more about at Inside bodybuilding.

Sandow spent a couple of years travelling Europe as a circus strongman. Eventually he ended up in Brussels, where he first met Ludwig Durlacher. A German-American strongman, and one of the first personal trainers in history. Durlacher would train the rich and famous out of his Brussels gym, and became something of a mentor to Sandow, who was 23 years younger than him.

In 1889, Durlacher opened his second gym in London, and convinced Sandow to accompany him. There, Sandow entered and subsequently won his first strongman competition. His win turned him into an instant star, and he spent the next year touring the British isles, competing in numerous strongman competitions.

In 1893, after four years in Britain, Durlacher decided to open a new gym in America. Sandow also travelled to America to find his fortune, though he appears to have done this separately to Durlacher. Once there, Sandow became a client of                 Maurice Grau, who worked in theatre management and production.

Sandow was then introduced to Florenz Ziegfeld Jr. who also worked in theatres (specifically Broadway). Ziegfeld wanted to take Sandow to the World’s Fair in Chicago that year, he eventually managed to persuade Grau to let Sandow go.

After the success of the Chicago World’s Fair, where Sandow had hugely impressed the audience with his physique, Sandow managed to break into the film industry. It was around this time that Sandow began to focus more on creating a beautiful physique rather than just aiming to be as strong as possible.

This is a big deal, because it represents the earliest moments of bodybuilding as it is viewed today. The pursuit of the perfect physique, rather than something like World’s Strongest Man, which is much more similar to traditional strongman performances.

Around 1898, Sandow returned to England, married Blanche Brooks, and started to use his fame to create a fitness empire for himself. He opened his own gym in London, created his own magazine “Physical Culture”, and wrote several books on the subject.

Sandow was the man to first come up with the term bodybuilding. He also invented numerous pieces of exercise equipment and launched the first ever bodybuilding competition in London in 1901.

He settled in London, buying a house (thanks to the help of a British-Indian businessman) and lived the life of a fitness celebrity. He toured the world, became the King’s personal trainer, and also helped train British troops for World War One.

Considering the fact that he was a Prussian/German, this seems like quite a big deal today, but doesn’t seem to have been given any significance at the time.

In 1905, Sandow travelled to India where he was much taken by yoga and the movements and breathing patterns it taught. Many Indian Yogis were equally impressed by Sandow’s approach to exercise and his love of gymnastics.

It is theorised that Sandow’s training style heavily influenced the modern yoga training programs that are around today. Before 1905, yoga was not used to improve physical fitness in the way that many yoga classes are taught today.

Sandow died of a brain haemorrhage in 1925 at the age of 58. He and his wife were not on good terms at the time of his death after he had been caught having an affair. As such, his grave was left unmarked, and his funeral was very low-key.

This could well have harmed his reputation, and in the UK, he is not a well-known celebrity to this day. This is a shame, because Sandow created modern bodybuilding, he also (alongside Durlacher) popularised personal training, and was one of the first men to write fitness magazines and fitness books.

Today, he is best remembered thanks to the Sandow trophy that is given to winners of the Mr Olympia competition. But most people who know what a Sandow is, are unaware of who Eugene Sandow actually was, and just how crucial he was to the establishment of bodybuilding as a serious competition.

Eugene Sandow created a blueprint for other bodybuilders and fitness professionals to follow. He earned a living from his hobby, stayed dedicated to its principles for his entire life, and supported and inspired many up and coming bodybuilders of the time.

He probably shouldn’t have cheated on his wife though!

Angelo D'acunto: The Man Behind Boosting Sales and Revenue