While actor Sushant Singh Rajput’s untimely death is yet to come to a conclusion, the spotlight now is on the drug addiction that is allege 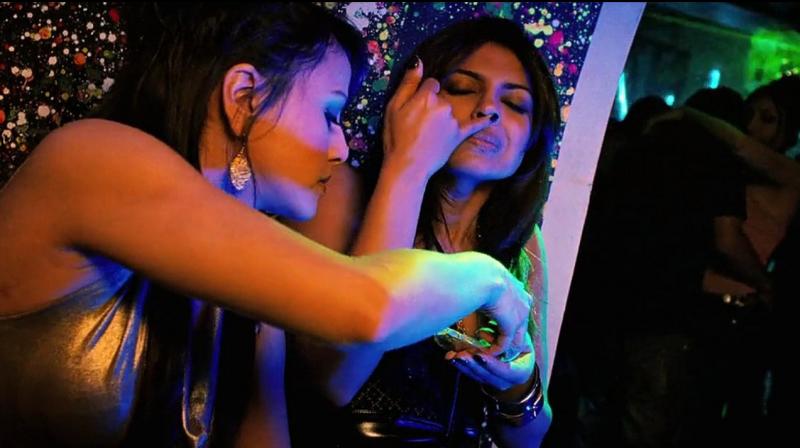 Still from the film Fashion which showed drug usage by models

Bollywood and controversies have a strong relation. Whether the talk is about casting couch, decadence, nepotism, bias or connections to the high and mighty, Bollywood has surely for long taken centre stage in the global media.

Now, once again, the entertainment industry finds itself in the global gaze with allegations of drug addiction and debauchery surfacing. The controversy this time spiked after actress Kangana Ranaut made claims about Bollywood’s involvement in drugs. The actress took to her twitter account recently and stated that 90% of those in Bollywood are drug addicts. In the same tweet, Kangana even revealed some big names in the industry as being cocaine addicts. The Tanu Weds Manu actress also claimed that police and politicians, too, are partners-in-crime when it comes to drugs.

While Kangana’s shocking remarks are certainly courageous, especially in the wake of Sushant Singh Rajput’s death to which Bollywood has been a largely silent spectator, the scandal surely seems to be adding to tarnishing Bollywood’s reputation. Also, with the Narcotics Control Bureau (NBC) investigating Rhea Chakraborty and two others on the basis of a drug angle in connection with Sushant’s death, Kangana’s allegation seems to support the investigation.

Kangana’s revelation might have not gone well with some big names in the industry but the drug addiction and debauchery in the industry is not so unknown. Let’s face it. This is not even the first time Bollywood has been caught in a drug controversy. Reports even in the past claimed that the drug problem in Bollywood was deep-rooted, and some of the actors had confessed that though they took drugs or were addicted, they have now overcome it.

People close to the industry validate that most of the Bollywood celebrities are drug addicts and their high-end parties have a separate corner for consumption. Even The Tashkent Files director Vivek Agnihotri supported Kangana’s statement that drug mafias do exist in Bollywood.

‘Not all Bollywood celebs…’

Gaurav Panjwani, who directed the 2018-film Bombae as well as the 2012-film Second Marriage Dot Com, agrees that mild drugs are very common in Bollywood and that he has even seen people taking those. However, he believes that what’s now going around is a rather one-sided narrative. “If the A-list actors are taking drugs every day, then how are they cultivating the energy to hit the gym the next day? They are health-conscious too,” says the director.

According to television actress Sheetal Khandal, drugs are not a new thing in Bollywood. “I know people in the industry take drugs. In fact, I know many people who I’ve worked with to be drug addicts,” she says adding, however, that not only those in Bollywood but also those outside the industry are addicted to drugs.

A past full of instances

A life packed with money, fame and adulation is bound to be fraught with hedonism and debauchery. Showbiz has especially been more in focus. In the past, there have been many reports of Bollywood celebs being questioned on their drug consumption. A few years ago, drug supplier Bakul Chandaria was arrested for supplying drugs worth Rs12.48 lakh. The accused, who has been snapped with Bollywood actors such as Salman Khan and Ranbir Kapoor, confirmed that he has Bollywood’s A-list actors as his clients.

Swapna Patker, clinical psychologist and life coach who has dealt with many stars from the film industry, talks about those who do not detest the idea of doing drugs as it is considered more than just a lifestyle.

“When newcomers enter films and ‘upgrade’ their standards, they do not rely on monthly pay cheques and sometimes even make money on a daily basis. They move on from travelling in an auto-rickshaw to being driven around in cars and from living in rented houses to setting up their own apartments,” explains Swapna. “Suddenly, they realise they have not only money but also rich and powerful friends now.”

Speaking from her experience of having top movie stars as her clients, Swapna offers generic examples of two fictitious actresses belonging to different circumstances.

“Say, a successful and rich actress with a rich and successful boyfriend, has everything she needs but lacks excitement. She uses drugs to fill that ‘vacancy’. A struggling newcomer’s anxiety to be a part of the best in the industry could turn her to drugs. So, while the heady mix of excitement gets one to seek self-actualisation and nirvana through drugs, the killing sense of isolation and need for perfection leads the other one to drugs,” explains Swapna.

According to the clinical psychologist among the squanderers who find themselves in such predicaments are usually stars who don’t know how to park their money. “I know some who don’t even know when their taxes are due,” adds Swapna. “They don’t understand things such as ‘TDS’ and other money-related terms. So the money earned, even if it’s Rs 10 crore, is spent quickly by resorting to drugs or alcohol as celebrations or as a solace to their financial woes.”

A part of lifestyle

All said and done, many in showbiz are apparently into recreational drugs without being addicted to them. Film writer and historian Imtiaz Baghdadi points out that not everyone in Bollywood is a drug addict or for that matter, peddlers. “Yes, over the years, we’ve heard and seen many of them to be into recreational drugs,” he opines, drawing inferences from the famous Ranbir Kapoor admission as well on how in his younger days he smoked weed just for a lark. Imtiaz, however, reminds us of the case of Sanjay Dutt, whose life was rocked by drugs and rehabilitation for many years. The film historian goes on to talk about how others such as actors Vijay Raaz and Fardeen Khan were even arrested with substances of a different kind, albeit for consumption.

Interestingly, in the days of yore, the biggest of the movie stars used to come over to stand against drugs as was also seen in the huge Bollywood mobilised event Hope ’86. 34 years later, however, the star-filled industry is conspicuous in its silence.

On the one hand, the industry gave us films such as Udta Punjab, Go Goa Gone, Dum Maro Dum, Shaitan, Pankh, Fashion, (which, by the way, also starred Kangana Ranaut as a fashion model who was ruined by drugs), Janbaaz, Charas, Dev D, Malang, Jalwa and Hare Rama Hare Krishna on the prevalence of drugs. On the other hand, when heat gets closer to home, it’s turned into a cold turkey.

The behaviour has prompted insiders such as trade analyst Komal Nahta to openly ask the big Bollywood folks to come and talk about the subject of drugs rather than maintain a stoic silence. But Imtiaz Baghdadi bangs the nail on the head when he points out, “No one wants to get into the muck now. It will only get dirtier.”