During Spring this year, Vemuri got associated with RACE4GOOD NGO and participated in the ‘My Teams’ challenge 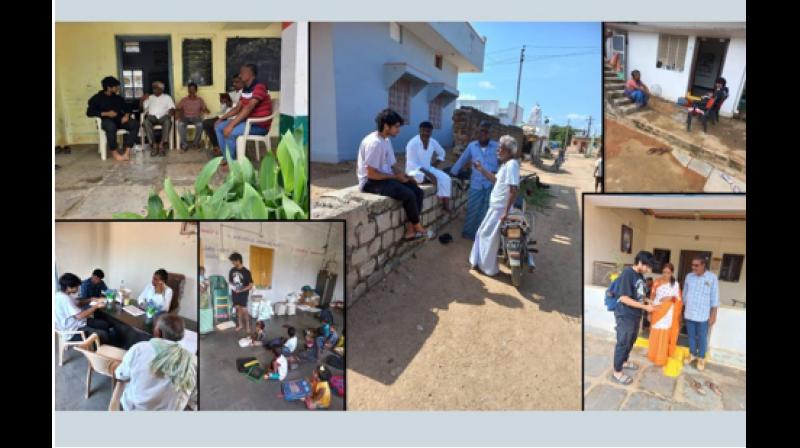 Vemuri also attended meetings of the Sarpanches in the villages to understand the development schemes and problems from the government such as late payments, or lack of necessary funds to improve educational infrastructure within villages. — By arrangement

The rural areas are primarily responsible for Telangana's low literacy rate of 66.54 percent, which is the lowest in the country. The reason for this is that more than 90 percent of parents in rural areas work as farm laborers and force their children to work in the fields for extra income. This was revealed in the study conducted by Shrikar Vemuri, who is currently in plus two (high school student) and has taken economics, mathematics, computers as his subjects for majors at the Dubai English Speaking College in the United Arab Emirates.

During his six weeks internship with Villages in Partnership, a non-governmental organization (NGO) based in Mahbubnagar district in Telangana, to understand the story and to connect to his Indian roots, Vemuri carried out an extensive study on the education scenario in the villages including Balakistapur, Gopanpet, Khanapur, Mastipur and Singanpet in May 2022. The sole objective was to collect primary data for education and interact with the children to understand the last mile integration of State Government schemes into the rural population.

“I found out that parents play a major role in children’s education. More than 90% of all parents in the rural setting worked in farms.  Since farming involves a lot of manual labour, the parents are forcing their children to work in their fields which not only ruins their education as gaps occur, but rather inspires them to work continuously within the farms to earn quick money.” Said Vemuri

“This mentality of quick money is a domino effect, where it inspires other kids to work on farms rather than attend school. This lack of parental guidance and high illiteracy cause children to follow in their footsteps and make it tougher for themselves to grow from an educational and mental standpoint.” He added.

Mahbubnagar has a population of around 4.3 million, which is half of the UAE’s population. The data collected from the villages in Mahbubnagar showed how parental influences on students can change their perspective on education and become a big reason for a staggering 33.46% illiteracy in the Telangana state.

“During my internship, I had the chance to meet the parents of students and explain how uninterested parents are in their children’s education. Many parents would send their wards to schools for Mid-Day meals. This neglect, in my opinion, will completely ruin their children’s outlook in life, as they will focus on their quick money needs rather than improving their education.” Said Vemuri.

During the Spring season this year, Vemuri got associated with RACE4GOOD NGO and participated in the ‘My Teams’ challenge to recommend solutions anchored on education and self-sustainability in Haiti. His team went on to win the global sustainability suggestion across the Council of British International Schools (COBIS).

In Khanapur village in Mahabubnagar, teachers at an upper primary government school were highly disciplined and motivated to not only teach their students, but rather they were more focused on the emotional and mental well-being of their students.

This also meant that teachers would provide additional classes with workshops to help students in need of assistance, something not even appear within the private schools of Mahabubnagar.

Vemuri also attended meetings of the Sarpanches in the villages to understand the development schemes and problems from the government such as late payments, or lack of necessary funds to improve educational infrastructure within villages. However, the main problems discussed at the School Management Committees (SMC) by the Sarapanches were electricity substations and good roads and not education.

Vemuri’s research found that the State Government’s decision mandating schools and teaching English along with Telegu has cast a dark shadow on the future of students who are not aware of English.

Overall, Shrikar Vemuri believes the most significant points to consider within the influences of these students would be the parents the teachers/government and then the student themselves, because from his understanding of human behavior, wherever the majority goes the minority follows.

However, having outcasts, people who do not want to follow is completely normal, his goal is to make sure that the majority side of education development is taken care of within the villages because as Mahatma Gandhi said, “India lies in its villages”.