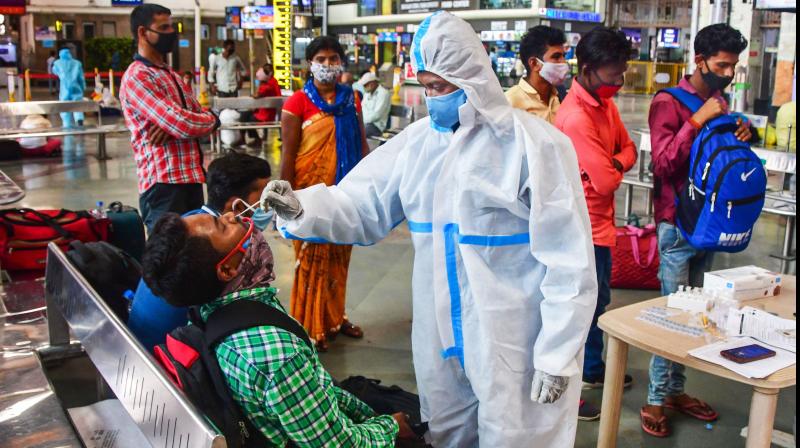 Senior officials in the Union health ministry said there is no need to panic as the government has ensured that there is no shortage of Covid-19 vaccines in the country. (PTI file photo)

New Delhi: Due to the big surge in cases again, the Kumbh Mela has been curtailed to one month and Covid negative report has been mandatory for pilgrims. Besides, several states have started imposing restrictions on movement of people and all passengers to Bengaluru will now need to have a Covid-19 negative report from April 1.

The Rajasthan government has issued orders for no functions during Holi and Shab-e-Barat while two-day lockdown is expected to be imposed in Indore on Holi due to rising cases. In Chhattisgarh’s Raipur, all tourist places have been shut down and restrictions for Holi have been imposed.

Six states -- Maharashtra, Punjab, Kerala, Karnataka, Chhattisgarh and Gujarat -- are reporting a surge in daily new cases and together they account for 80.63 per cent of the cases reported in the last 24 hours. While Maharashtra recorded 35,952 cases, Mumbai reported 5,504 fresh cases. Municipal Corporation of Greater Mumbai has decided to take up testing to at least 60,000 per day in coming weeks to contain the spread.

Given the situation in India, the government  has decided to pause “Vaccine Maitri’, its diplomatic initiative, and temporarily put on hold large exports of the AstraZeneca-Oxford-SII vaccine, Covishield. India’s last commercial shipment was to Namibia on March 22 and the last dispatch of free vaccines was to Malawi on March 18. So far, more than 60 million doses of Made in India vaccines have been supplied to over 75 countries, including through COVAX, led by Gavi, the global vaccine alliance.

With the government opening up vaccination for a larger chunk of population over the age of 45, the demand of vaccines at domestic level is expected to rise manifold forcing the Centre to recalibrate its export commitments. Sources said the Indian government wants to first fulfil its domestic commitment before allowing exports of Covishield. India is likely to remove these restrictions after three months or so when more vaccines like Reddy-SuptnikV and others enter the Indian market in a big way.

India’s decision has irked the UN-backed international vaccine alliance Gavi which blamed India for going back on its export commitments. In a statement, Gavi said deliveries of the Covid-19 vaccines to low-income economies will face delays due to India’s decision to halt exports.

However, sources in the government clarified that India has not imposed any ban on export of the vaccines but is only recalibrating supply schedules due to domestic commitment and manufacturing capacity.

“We had stated that keeping in view the domestic requirements of the phased rollout, India will continue to supply Covid-19 vaccines to partner countries over the coming weeks and months in a phased manner. This position remains unchanged. We have not imposed any ban on exports of vaccines unlike many other countries. We remain committed to help the world with vaccines, including through COVAX Facility. Given our current manufacturing capacity and requirements of national vaccination programmes, there may be a need to calibrate the supply schedules from time to time. All stakeholders would have to work together to adjust the schedules as required. Only by such cooperation, we can collectively deal with the ongoing pandemic,” an official said.

Senior officials in the Union health ministry said there is no need to panic as the government has ensured that there is no shortage of Covid-19 vaccines in the country. So far over 5.31 crore vaccine doses have been administered across the country out of which more than 23 Lakh doses were given in the last 24 hours. These numbers are expected to pick up as the population over 45 years of age goes for the jab.