India   All India  01 Jan 2017  With Amma in heart, Sasikala takes over as AIADMK chief
India, All India

With Amma in heart, Sasikala takes over as AIADMK chief

In an emotional speech that lasted about half an hour, she broke down every time she recalled her association with Jayalalithaa. 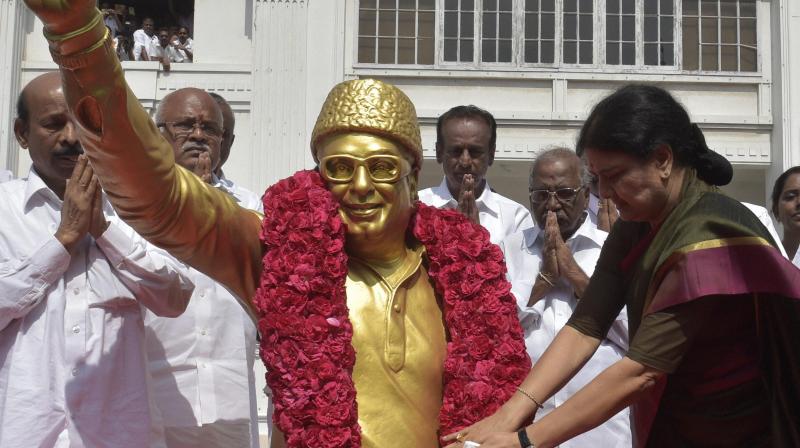 Ms Sasikala, clad in a light green saree with pink border, arrived at the party office after a rousing welcome all the way from what’s now her residence, Poes Garden. Party activists carrying party flags, banners and festoons sporting bright images of Jayalalithaa and Sasikala were lined up on both sides of the road from Poes Garden to the party headquarters at Royapettah.

While thanking party leaders for unanimously naming her as party general secretary, an emotionally charged Sasikala said, “I carry Amma in my heart.”

Pledging to take forward the legacy of Jayalalithaa, she asserted that she had been with Jayalalithaa for party meetings for over 33 years and that the AIADMK will continue to rule for many years.

“I am 62 years old and I have spent my life with Amma from the age of 29. I will spend the rest of my life working for the party and its cadre.”

The AIADMK, she said, will be run the way as it was run during the time of Amma, with a level of “discipline as seen in the Army”.

Her assertion came against the backdrop of some murmurs of protests against her taking over the post.

In an emotional speech that lasted about half an hour, she broke down every time she recalled her association with Jayalalithaa.

Heaping encomiums on Jayalalithaa, she said, “Let us follow like Vedas our Amma’s political lessons and her footsteps,” adding, “this movement (AIADMK) which was shaped by Amma is a people’s movement, this is people’s government, our journey will be in the path laid by Amma.”

She said the “yardstick” followed by Jayalalithaa for elevation of cadres in the party organisation will continue to be the same and “we will not diverge even an iota from it.”

No one other than party founder M.G. Ramachandran, Dravidian ideologue C.N. Annadurai and “Amma” will be given prominence in the party, she said and added that the party will continue to follow in the footsteps of these great leaders who looked beyond caste and religion.

Hailing Jayalalithaa for her courage, she said the late leader had stormed the male bastion of politics that has given confidence to women. “Today as a woman, if I have come forward to lead the party, a very important reason for it is the faith that crores of brothers and sisters will support me,” she said.

For the first time she also publicly spoke on the death of Jayalalithaa amid demands for a probe by Opposition DMK, and members of AIADMK.

Ms Sasikala said she had firmly believed that Jayalalithaa would recover. “Although Amma’s health improved that facilitated her shift from Critical Care Unit to a private room, she unfortunately passed away… It was not thought of even in my dream and it was like a thunderbolt falling on one’s head (when she died)”, she said, adding her only wish had been Jayalalithaa’s well-being.