Beyul Pemako is believed to nestle the mythical land of Shangri La or paradise in Tibetan Buddhism. 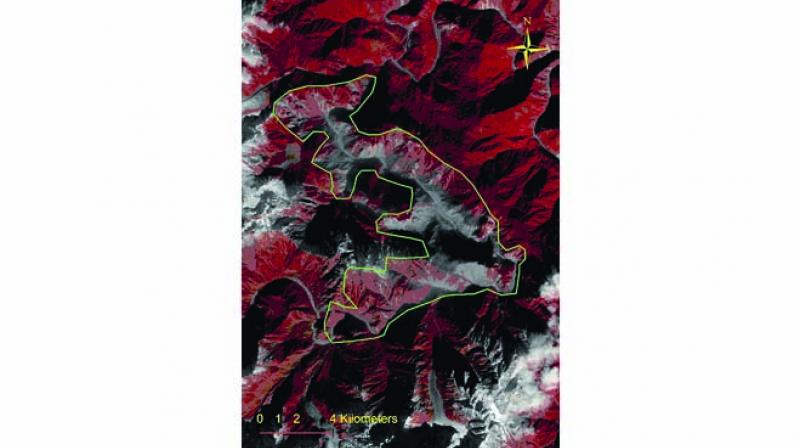 Satellite image of the landslide zone

New Delhi: The landslides caused by a 6.4 Richter scale earthquake on November 17 in one of earth’s most forbidding and inaccessible regions in the ‘mystical’ land of Beyul Pemako near the India-China border has resulted in massive landslides that are still continuing with the slide area increasing to at least 78 sq km as on December 21 shown in the imagery by LANDSAT-8, a satellite jointly operated by Nasa and the United States Geological Survey (USGS).

After a perusal of the LANDSAT-8 imagery of the Gyala Peri-Namcha Barwa gorge taken by the US LANDSAT-8, Prof Nayan Sharma, a prominent river engineering expert presently with IIT Roorkee, told this newspaper: “The area of the prime mountain slide zone is measured to be approximately 78 sq km as extracted from the satellite imagery. This slide zone is relatively close to eastern Tibet major tourist city of Nyingchi at a distance of 139 km downstream.” “From an inspection of multi-date satellite images of the affected zone, it could be inferred that the landslide process resulting in debris dam growth is yet to reach its final equilibrium stable state. This is a worrisome occurrence, especially pertaining to potential debris dam breach flood in coming days or months with serious portents for downstream habitation areas in eastern Tibet, Arunachal Pradesh and Assam”, he said adding that the major mountain slide zone extends over a river length of about 33 km which is located about 47 km away from the commencement of Yarlung Tsangpo Grand Canyon.

Beyul Pemako is believed to nestle the mythical land of Shangri La or paradise in Tibetan Buddhism. It is believed to be a hidden land of humanity’s wise adepts endowed with supernatural powers and constantly working for mankind’s betterment who will announce their existence as dictated by the needs of the time. It was only in 1998 that Ian Baker, a Buddhist scholar, and explorer first managed to complete the last unexplored navigation of the river. This regions is home to some of earth’s highest peaks like the Gyala Peri (7293 m) and the Namcha Barwa (7780 m), through which Yarlung Tsangpo gushes down in a torrent of cascades and rapids and also carving out the deepest gorge on earth, so deep that even satellites find it difficult to probe deeper.  The river length of the Yarlung Tsangpo between the affected landslide zone to Indian border at Tuting is just about 165 km and its elevation drop is about 1300 m, while the elevation drop up to Pasighat is an overwhelming 1600 m.

Within the river reach, the maximum elevation drop of about 2000 m exists between Pe and 50 km upstream of Indo-China border. Maximum recorded discharge in Tsela Dzong and Pasighat stands at formidable magnitudes of 10,000 cumecs and 30,000 cumecs respectively. “With the weather gradually warming up in coming days and months, the stream-flow will be steadily rising, thereby exerting enhanced hydrodynamic force on the temporary unconsolidated dams created by the mountain slides material which may potentially lead to their sudden collapse and resulting surge waves will be rushing downhill at very great velocities towards the lower foothills and plains in Arunachal Pradesh and Assam to potentially wreck devastations,” Sharma said.

Said Himansgshu Thakkar, a leading water activist from the South Asia Network on Dams, Rivers & People: “Our government still has not come out with a comprehensive status statement about the status and consequences, six weeks after the earthquake and more weeks after the Siang waters became muddy. We need to immediately put together a team of disaster management that will monitor and plan the preparedness to deal with the breach in the dams that would bring sudden, unseasonal heavy floods in the downstream area. The team should include geologists, hydrologists and disaster managers, including NDRF teams.”  “Even in terms of long-term, the Indian government has not put sufficient pressure on China not informing about India even about the June 2000 Siang floods that resulted from a similar event that year,” he added.

What can govt do?
1. Round-the-Clock monitoring through optical for 360 degree quantitative analysis
2. Environmental and human vulnerability analysis from the angle of disaster mitigation.
3. Multidisciplinary feasibility of controlled blasting of temporary blockage dams may be explored.
4. Urgent relief, evacuation measures for disaster management may be planned.
5. Taking advantage of Chinese cooperation offer, setting up of a joint disaster mitigation mechanism on a permanent basis.