India   All India  01 Jan 2019  A year after clashes, security beefed up at Koregaon Bhima to avoid rerun
India, All India

A year after clashes, security beefed up at Koregaon Bhima to avoid rerun 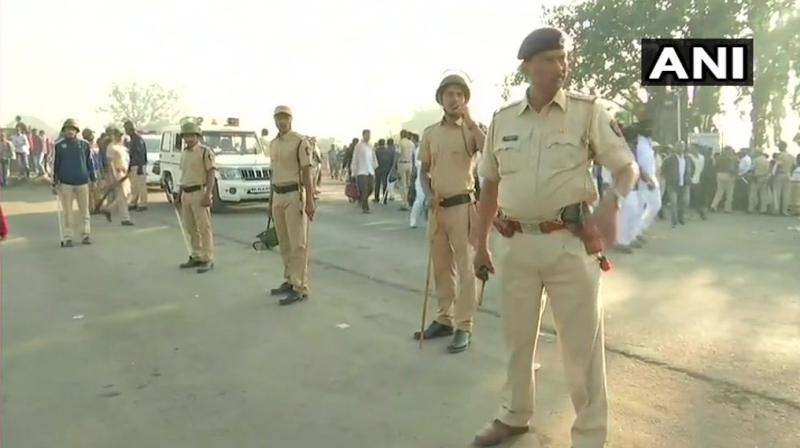 At least 20,000 security personnel, including 5,000 police personnel, 1,200 Home Guards and 12 companies of RAF and SRPF have been deployed in and around the war memorial. (Photo: ANI)

One person was killed and several others were injured in caste clashes that broke out on January 1 last year on the occasion of the anniversary of the 1818 battle, which has attained legendary stature in Dalit history.

At least 5,000 police personnel, 1200 Home Guard jawans, 12 companies of the State Reserve Police Force (SRPF) and 2,000 Dalit volunteers are deployed in and around Perne village where people are paying tributes at the war memorial, police said.

The 'jay stambh' was erected by the British as a memorial for soldiers killed in the Koregaon Bhima battle on January 1, 1818.

Besides large-scale police deployment, 500 CCTV cameras, 11 drone cameras and 40 video cameras are monitoring the area, a senior police officer said. Police check posts have been set up along the border of Pune district.

"Internet services in and around Perne village have been suspended," special Inspector General of Police Vishwas Nangre-Patil said.

In the Dalit narrative, the 1818 battle is the victory over casteism as the British Army comprising a large contingent of Dalit Mahar soldiers had defeated the forces of Peshwas--the Brahmin custodians of the Maratha kingdom.

Bharipa Bahujan Mahasangh leader Prakash Ambedkar, the grandson of Dalit icon B R Ambedkar, was among the first politicians to offer his tribute at the Jay Stambh this morning. After laying a wreath at the memorial, Ambedkar hoped the commemoration event will pass off peacefully.

"Unlike last year, local people of surrounding villages have extended all help during the commemoration. Locals are lending a helping hand. I hope peaceful completion. However, the police should not act in haste," he told reporters.

Ambedkar said the number of visitors is likely to swell this year. "The reason behind the surge is because the likes of retired SC judge P B Sawant, retired HC judge B G Kolse Patil and some students (Kabir Kala Manch) took the history of the Koregaon Bhima battle to rural Maharashtra," he said.

Unfortunately, the same students who "bridged the gap between the Marathas and the OBCs using the Elgaar Parishad platform were labelled as Naxals by the government, he said.

"These students took real history of Koregon Bhima to the masses, but the government labelled them Naxals," he said, adding the government should find real perpetrators of last year's violence and bring them to justice.

Police are probing the alleged Maoist links in the January 1 violence, which they suspect was triggered by provocative speeches made at the Elgar Parishad conclave in Pune on December 31, 2017. In the wake of the clashes, police had booked Hindutva leaders Milind Ekbote and Sambhaji Bhide on charges of inciting violence