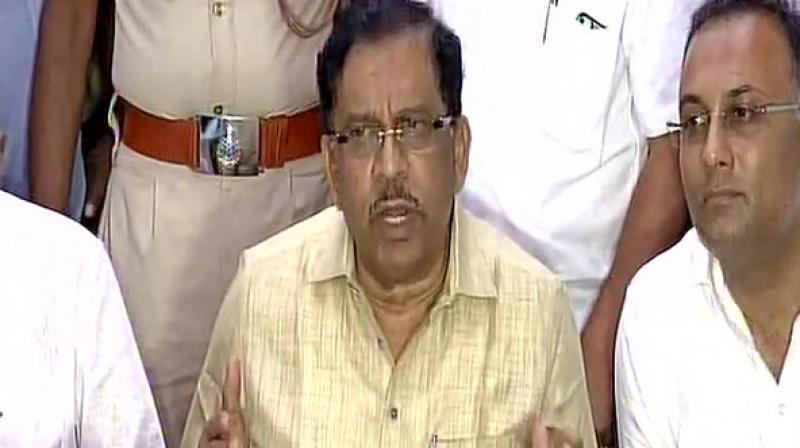 G Parameshwara's charge comes amid reports that disgruntled Congress MLA Ramesh Jarkiholi who was dropped from the ministry in the recent reshuffle, has been camping in Delhi. (Photo: File | PTI)

Bengaluru: Karnataka Deputy Chief Minister G Parameshwara on Tuesday accused the BJP of making a fresh bid to topple the JD(S)-Congress coalition government in the state, asserting that it would not succeed.

As the war of words between the BJP and Congress over the alleged toppling game intensified, Parameshwara claimed that efforts were underway to arrange a meeting of his party's disgruntled MLAs with BJP president Amit Shah.

"BJP is an expert in horse trading. They have already proved it last time. This time also they tried (to unsettle the government) but they failed in their attempt. Again, they are making a fresh bid," the deputy chief minister alleged.

Speaking to reporters, Parameshwara charged that there were efforts to woo 'some MLAs' from his party, Congress, but he refused to divulge their names. "Some MLAs are there and attempts are being made to arrange their meetings with the BJP national president. "We have information that they are making attempts (to topple the government) but they will not succeed," he said.

"Government is safe and there is no need to panic," he asserted.

Parameshwara's charge comes amid reports that disgruntled Congress MLA Ramesh Jarkiholi who was dropped from the ministry in the recent reshuffle, has been camping in Delhi.

He has remained incommunicado since he was removed from the ministry. His brother Satish Jarkiholi, a minister in Kumaraswamy government, on Tuesday said he too came to know that Ramesh was in Delhi. He did not rule out the possibility of some other miffed MLAs being with him.

The BJP on Monday had maintained that it was not trying to dislodge the coalition government in Karnataka while the Congress had claimed it has evidence of 'horse trading' of its MLAs, alleging that they were each 'offered' Rs 25 crore to 30 crore. State BJP chief B S Yeddyurappa had demanded that Congress produce proof to substantiate its claim.

Congress legislature party leader Siddaramaiah had responded, saying he would produce evidence at the "appropriate time."