Assam CM Sonowal gets emotional: I'm your son where will I go?

Sonowal appealed to the people of Assam to not isolate him. 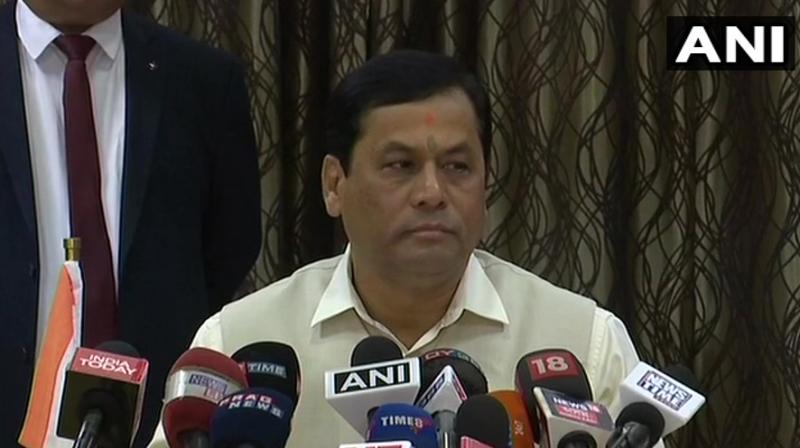 “There is no point of being the chief minister if I cannot protect the interests of the very people who elected us' Sonowal said. (Photo: File | ANI)

Guwahati: Assam chief minister Sarbananda Sonowal here on Wednesday said that his government has given suggestion to the central government, which is in process of frame the rule of the Citizenship (Amendment) Act, to incorporate their point of view so that interest of indigenous people remains protected.

Asserting that he is also the son of this soil and will not compromise with the interest of indigenous people at any cost, Mr Sonowal in an interaction with journalists on New Year’s eve, said, “I would like to make an appeal to the people of my state to have trust in me. I am your son and this government to which I am heading is here due to your blessing. We son of the soil are running this government since 2016 but never compromised with the interest of people. Please do not isolate me from you…where will I go if you do so….just wait and watch for some time, all false campaign will fall flat.”

Making an emotional appeal to the people of the state, Mr Sonowal reiterated that wrong narrative on the Citizenship (Amendment) Act (CAA) by certain destructive elements made Assam suffer violence and arson.

“A section has misguided the people by claiming that the CAA will make 1.5 crore Hindus of Bangladesh eligible for citizenship. I know you will not believe me now but the reality is that very few people already living in Assam for decades will get citizenship because of this Act. It will become clear when we publish the list after their applications are processed,” said Mr Sonowal who regretted that he has been called by various 'nick names' but time will prove my commitment for the people of the state.

“I assure the people of Assam that my government will not take any step that goes against the indigenous Assamese people. There is no point of being the chief minister if I cannot protect the interests of the very people who elected us. Assam was, is and will be for the Assamese people and no force can threaten our language, culture and existence,” Mr Sonowal said.

While highlighting measures of his government to protect the language, land and culture of the state.

Pointing out initiatives of his government since 2016 and massive investment of the central government in the state, Mr Sonowal said, “It is amusing to see that the BJP which worked so tirelessly for the development of the state has become the villain and those looted the state and did nothing to defend the state from invasion of foreigners are part of agitation.”

Asking all the agitating groups---Aasu, AJYCP, Asom Sahitya Sabha and others to join hands for all round development of the state, Mr Sonowal  said that his government would safeguard-- jati, mati, bheti” (community, land, home) of the indigenous people of the state.

“Amar Asom (our state), Amar Mati (our land), Amar Adhikar (our right) are the guiding principles of his government,” the chief minister said. (EOM)