India   All India  01 Jan 2020  This new year, start learning a dance that reflects your sun sign
India, All India

This new year, start learning a dance that reflects your sun sign

Sun sign astrology is the form of astrology most commonly found in many newspapers, magazine columns and nowadays a lot on the Internet too. 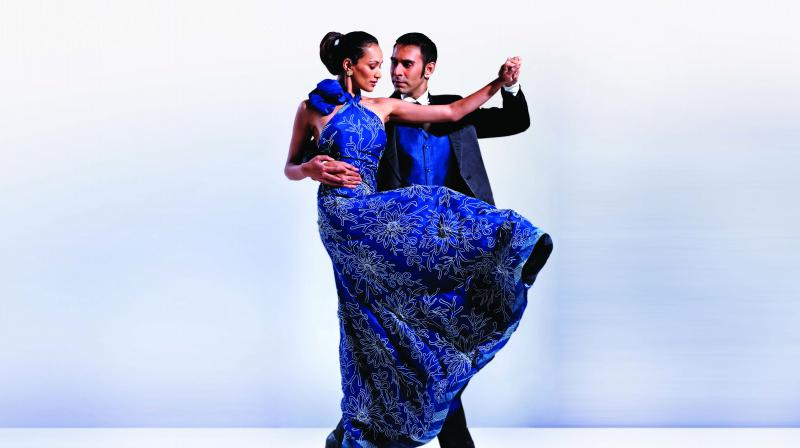 Sun sign astrologers take this basic 12-fold division and relate all the current movements of all the planets to each other, using traditional rules to divine meanings for each sign separately.

The new year has just begun and there are many people who love to know about what’s next for them in life and what the future holds for them in personal as well as professional life. When we are in stress or many a times just for fun we do visit or have often been advised to visit an astrologer. I have seen people going to meet jotishies, a tarot reader or take a simple look at the horoscope in the newspaper they subscribe to.

Sun sign astrology is the form of astrology most commonly found in many newspapers, magazine columns and nowadays a lot on the Internet too. It is a simplified system of astrology which considers only the position of the sun at birth, which is said to be placed within one of the 12 zodiac signs. This sign is then called the sun sign or star sign of the person born in that 12th part of the year.

Sun sign astrologers take this basic 12-fold division and relate all the current movements of all the planets to each other, using traditional rules to divine meanings for each sign separately. Because the moon has the fastest apparent movement of all the heavenly bodies, it is often used as the main indicator of daily trends for sun sign astrology forecasts.

This science attracted me a lot so I took up the task of understanding the nature of the person belonging to each of the particular star sign and then relating their traits, manners and behaviours that reflects in the best possible manner to dance, especially the dance that I have specialised in: “Latin American and ballroom dances”. It is said that it is very important to practice a dance form that one relates to or one has the ability in. Only then can one excel in the art. Being caught in a wrong dance form can be very frustrating and at the same time very annoying for a dancer.

There are so many types of Latin American and ballroom dances: Which dance is my type of dance? This is a question new students have often asked me. As a teacher, when you do not know a student, how can one give advice to choose a particular dance form? So I decided to gauge a student’s personality with the help of their sun sign and then suggest a form that might interest them. An almost six-month survey which I did with the help of my astrologers Rekha Joshi and Mahesh Nimbalkar gave me the following result. I feel privileged to share this with all of you and I hope that you will find it beneficial for yourself and this will help you choose the right dance for yourself in the coming year.

Aries — merengue: This dance comes from the Dominican Republic and its neighbouring island Haiti. This quick tempo dance is great for people who are very aggressive, self-confident and full of life. This dance has bouncy, vigorous and brisk moves which are typical traits of an Arian (being assertive and energetic).

Taurus — Viennese waltz: This dance comes from Austria and the south of Germany. While performing this fast dance, one has to be very watchful and alert all the time as others do not bang into you while in the movement of the dance. It is a very compassionate, poised, royal and a very loving dance. Its movements are all in fast circular motion. Viennese waltz is especially for Taurians as they are known to be very careful and caring people

Gemini — cha cha cha: This dance is an offshoot of a famous Latin folk dance called the mambo. Cha cha cha has very inviting music, it is flirty, naughty and a very spicy dance, filled with lots of hip actions. This mischievous, dynamic and bubbly dance is best for Geminis as they are known to be very lively and flirtatious by nature.

Cancer — English waltz: Like its name suggests, this dance comes from England. It is considered to be one of the most tender, mild, graceful and elegant dances of the world. The dance direction, movements and a few times even the speed keeps changing, making it a very unpredictable and unstable dance just like the star sign Cancer, they are known to be very moody yet gentle as people.

Leo — paso doble: This dance is associated with Spain, as it is the story of a “bullfight” on to the dance floor. This dance is extremely flashy, flamboyant and extravagant. The mood of this glitzy dance is a “fight”. In this dance, the man represents the matador and the women his cape in the drama of the Spanish bullfight. This hot and flaming dance truly represents the ever so flamboyant and fiery Leo.

Virgo — jive: This dance comes from the United States. Jive is similar to boogie, jitterbug, west coast swing, lindy hop and most of all, rock n’ roll. It is a fun filled, carefree, practical and relaxed dance. While performing this dance, one needs to be extremely watchful and careful, as it’s a high-speed dance. This crazy dance is best for Virgos as they are known to be very practical, cautious yet fun-loving people.

Libra — rumba and bolero: Rumba is the national dance of Cuba and bolero comes from Bahamas. They both have fascinating rhythms and bodily expressions. Extended long legs and hem lines enhance the romantic mood of these dances. Rumba and bolero are said to be the spirit and soul of all the dance forms. When we think of these “dances of love” we think of passion, obsession, infatuation, togetherness and lust. And that’s what Libras are said to be, romantic at heart, always in love with “love” and extremely charming as individuals.

Scorpio — tango: This dance comes from the backstreet bars of Argentina. It is the dance of “mixed feeling”. Tango means many things to many people, just like the mysterious Scorpio. It’s sexy and passionate attitude resemble the characteristic of the adoring yet inexplicable and enigmatic Scorpion.

Capricorn — bossa nova: This dance form comes from Bahai. It is meant for the typical Capricorns as they are cool, go-getter individuals who are always determined to do the best. Similarly, this dance style too is like a livewire: very splendid, impressive and grand, firm-danced with an attitude that is fresh, calm and breezy, very similar to a Capricorn.

Aquarius — salsa: This dance style is the most erratic and unpredictable of all the dances, yet it is orderly in its form, having a structured movement. Only a whimsical and wise Aquarian will understand the method in the madness. This saucy dance is the craze of this decade. Salsa moods can change at any time from being sexy to spicy or loving to gloomy or from being passionate to heartbreaking.

Pisces — quickstep: This is a very imaginative and an artistic dance, danced in a very pensive and wistful mood, just like the dreamy and very creative Piscean. A fast tempo yet in complete harmony, quickstep with its syncopated hops and swings is filled with loads of creative yet original impressive moves which are the typical traits of a Piscean.

At my dance classes and workshops, I have often met disappointed students who tell me, “Sir, I tried but I cannot dance”, “Oh it was not meant for me” or many such excuses. All I can tell them today is that maybe it is possible that you had taken up a dance that was not suiting your star sign or your character. So don’t ever think about what you cannot do. Instead, go ahead and try what is for you and fits your personality trait and star sign.

Sandip Soparrkar holds a doctorate in world mythology folklore from Pacifica University USA, an honorary doctorate in performing arts from the National American University, He is a World Book Record holder, a well known Ballroom dancer and a
Bollywood choreographer who has been honored with three National Excellence awards, one National Achievement Award and Dada Saheb Phalke award by the Government of India.He can be contacted on sandipsoparrkar06@gmail.com