Budget copies will be disseminated electronically, with documents being uploaded on the government website and on a special app 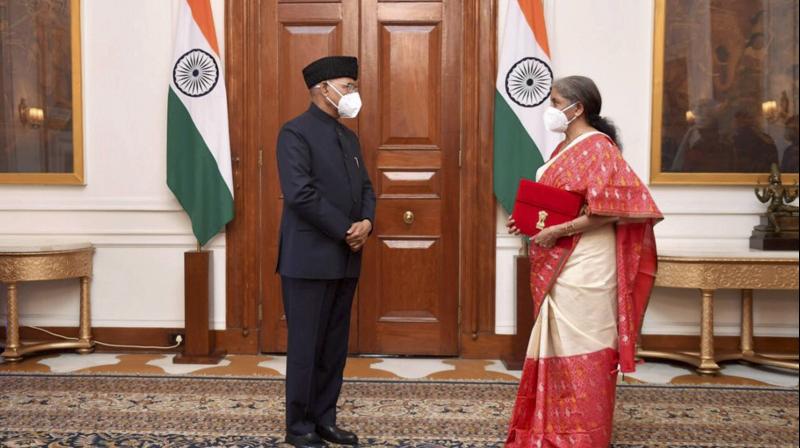 As per established tradition, the Finance Minister met the President at the Rashtrapati Bhawan before heading to Parliament.

The Union Cabinet will meet at 10.15 am to clear the Budget.

Also before the actual presentation, the Cabinet headed by Prime Minister Narendra Modi will approve the Budget for the fiscal year 2021-22.

While traditionally, copies of the Budget are brought to the Parliament complex before finance minister arrives, this year no document has been printed following the COVID-19 protocol.

Instead, the Budget copies will be disseminated electronically, with documents being uploaded on the government website as well as being made available on a special app developed for the same.

Expectations are running high as Sitharaman presents her third budget in the Lok Sabha on Monday. She has her task cut out to fire up a pandemic battered economy and revive the animal instinct in it.

Dressed in a red silk saree with off-white detailing and golden border, Sitharaman continued with the tradition she set in 2019 carrying the budget speech in a bahi-khata, which she used ditching the briefcase. She was seen holding a red bahi khata.

On the first day of the budget session of Parliament, Sitharaman on Friday tabled the pre-budget Economic Survey for 2020-21, which projected a 'V'-shaped recovery for the economy in the next financial year. The economy is projected to contract by 7.7 per cent in the current fiscal ending March 31, 2021 and expanding by 11 per cent in the next.